William Howard Taft (1878), Gerald Ford (1941 Law), William Jefferson Clinton (1973 Law), George Herbert Walker Bush (1948) and George Walker Bush (1968), Presidents all and Yale University graduates. Founded in 1701, Yale is the third oldest college in the US, with 5,100 undergraduates plus 11 graduate & professional schools with 5,200 students. I had not been back to Yale and New Haven for 10 years. All I remember was a dirty, grimy city where I assumed I was going to be mugged (much like New York was ten years ago). I did convey my feelings to Renny Loisel, the public relations director of the Greater New Haven Convention & Visitors Bureau (15 towns and cities in Southern Connecticut, including the 125,000 that live in New Haven) at a recent travel writer’s conference. She sent me a copy of a new book- “How to Survive Your First Year of Marriage by Traveling” by Dominick A. Miserandino (these travel stories are available in hard copy or on-line at www. thecelebritycafe.com) Since Renny is mentioned, what I read made me want to try another visit. “New Haven? Oh, you mean Yale. There is nothing to do and it’s not safe. New Haven is America’s first city planned (1638) according to a grid model, and in the center of the grid is a big city green with three separate churches and examples of Gothic, Federal and Georgian design. It’s where Rodgers & Hammerstein wrote the lyrics for Oklahoma. It’s where they made the first hamburger over 100 years ago. It’s where the Knights of Columbus has its world headquarters.” By the end of his weekend with Renny he said; “New Haven is one of those cities I will be back to. It has high-quality restaurants, museums and nightlife. I’ve fallen in love with New Haven”. 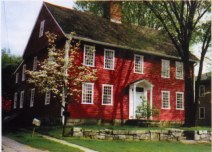 I arrived at the New Haven Hotel downtown-(800) NH-Hotel after a 1 ½ hour drive from New York City. I parked my car and for the next day and a half I placed myself in Renny’s hands. We walked all the first day or took the free downtown electric trolley that operates Monday thru Saturday from 11AM to 6PM. Since I had recently lost 30 pounds we skipped Frank Pepe’s where the “tomato pie” was born and also its friendly rival Sally’s, a few doors down. Also not on my diet list was Louis’ Lunch where the American Hamburger sandwich was conceived.. Renny told me that New Haven also produced the first cotton gin, the first lollipop, and the first Frisbee. Plus the first public library (1656), planetarium (1743) pay phone (1880), intercollegiate basketball game (1897) and American collegiate football ( 1872 against Columbia).

Even I had heard of the Long Wharf Theatre, a not-for-profit regional theatre offering eclectic productions of classics and new works. Founded 30 years ago, it really sits on a long wharf next to the Interstate and the Long Island Sound. http://www.longwharf.org .The Amistad Schooner is docked nearby during the summer months. Not far away is Lighthouse Point Park that has swimming, nature trails and picnic groves on its 82 acres. The Yale Repertory Theatre is downtown and is known for its fresh interpretation of the classics and its premieres of new works. It is a recipient of a Tony Award for Outstanding Regional Theatre. The Yale School of Drama has trained Paul Newman, Meryl Streep and Sigourney Weaver among many others. http://www.yalerep.org . Continuing with the performing arts, the New Haven Symphony Orchestra is the fourth oldest in the country. http://www.newhavensymphony.com .The Schubert Theatre, opened in 1914, has earned the title “Birthplace of the Nation’s Greatest Hits”. More than 600 pre-Broadway tryouts have been held here. It is now a non-profit performing arts institution presenting Broadway, dance, cabaret, music and family entertainment. http://www.shubert.com .

Right across the street from each other are the Yale Center for British Art, with the largest collection of British art outside the UK, which opened in 1977, and the Yale University Art Gallery, founded in 1832. It has 80,000 objects including masterpieces by Van Gogh, Manet, Monet and Picasso. After finishing our 75 minute free student led Yale Tour (10; 30AM & 2PM weekdays & 1:30PM on weekends) highlighting the history, architecture, culture & tradition of Yale we visited the Beinecke Rare Book & Manuscript Library. It features one of the few original Gutenberg Bibles, and more than 600,000 volumes and several million manuscripts. All three museums have free admission.

While we walked through the downtown are we stopped at INFO New Haven Center where we found tickets, guides and information about the area surrounding the Green. The Amisted Memorial, a 14 foot relief sculpture, is located in front of City Hall. This is the former site of the New Haven jail where the illegally kidnapped Africans were imprisoned in 1839 while awaiting trial. We took a self-guided walking tour of the Ansonia Historic District with homes from the early 1700’s through the 1970’s, all but one are privately owned. The Broadway shopping district, around the university, contains the Yale Bookstore, run by Barnes & Noble, and everything young men and women on campus night need. Chapel Street is lined with Tony shops, restaurants and coffee houses. 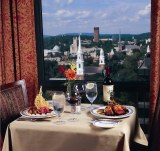 We ate at the Union League Café, serious French food with a comprehensive wine list. Drinks were had at the Playwright Authentic Irish Pub & Restaurant with its majestic hand-carved bars brought over piece by piece from Ireland. Scozzi Trattoria & Wine Bar was perfect for lunch; breakfast the second day was at Atticus Bookstore & Café. I even took home some of their home made Chabaso bread. A must is Roomba with its Central, South American & Caribbean fusion cuisine. We came by later that night to sample their tropical elixirs. Reservations are a must as fans come to eat here from as far away as New York & Boston. My final meal was at Bentara and its Malaysian cuisine and 1,500 reasonable priced wines.

During my 1 ½ days in New Haven we walked everywhere and never once did I feel nervous or threatened. I guess 10 years really did change New Haven for the better. Click here or (800) 332-STAY.