We finally arrived at our hotel in Munich. Driving for the first time into this busy city, our final turn was the wrong way on a curved, one way street, and we met another car head-on, which, thankfully, was slow and stopped. Torbrau Hotel is a third generation, family-owned hotel and just celebrated its 100th anniversary in the same family ownership. Unbelievably, this year is the 515th year of operation as one of the best hotels in Munich! Located just inside the Isar Tor, it had from its beginning the ideal site, where weary travelers on the Salt Road from the mines in Saltzburg had to stop to pay taxes at the tower gate entrance to the city of wealth. Salt, “the white gold,” trade made Munich one of the most important cities in Europe. Tor means tower, and Brau means brewery. This wayside inn had its own brewery and was known for its hospitality and good beer, so it has always been the place to stop. 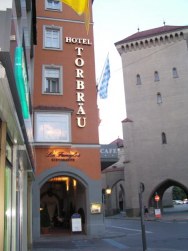 We felt so fortunate to be able to stay in this very personal hotel, instead of a chain hotel where to the staff guests are all faceless room numbers or credit cards. Here each member of the hotel staff treats us like a good friend, yet most do not know we are travel writers. We noticed they treat every hotel guest in just as personable and friendly, caring manner, going out of their way to look up information to answer each person’s needs. We appreciated their perfect English, and saw they carried on conversations with other travelers in their native tongues as well. The hotel lobby is not huge but is beautifully, tastefully decorated. Handicap travelers may have difficulty ascending the 7 steps to the lowest elevator level, though. The entire hotel, with its 92 rooms and suites, was renovated in the 1990’s to be ultra-modern, centrally air conditioned, and to provide every conceivable amenity of a fine four-star hotel. In an easy walk to most shopping and businesses within the Ring (circular highway), the Torbrau is a favorite hotel for business travelers. The excellent full breakfast is included with the room accommodatges early risers as well as extended hours until mid-morning for leisure tourists.

Torbrau has lovely convention facilities and graciouosly hosts tour groups in the same personal way they treat individual guests. The lovely Café also serves delicious lunches, teas with exquisite pastries, and dinner. Or you can elect to dine at its historic Ristorante Italiano at the hotel entrance.
En route to the Conditorei Café be sure to stop to see the diarama room set up as for guests in 1490! Seeing several dressed people in the bed with feet in each other’s face, sleeping while raucous bar-tending and food service went on in the same room, you’ll be very thankful you travel in this century. And note that over a century ago Torbrau offered sheets, and was one of the first hotels in Europe to do so, and even changed them every three days, no matter who slept on them!

The Torbrau has a colorful history with many famous people enjoying its comforts and graciousness, which always exceeded any other hotel of its generation. Although the hotel existed before its documented history, the earliest written reference to it was in 1490 when it was already well-known for the comforts provided by the owners Georg and Elisabeth Schmidt and was named “Thalthorherberge”. From 1540 to 1590 became known as the “Thorbrau” and was owned by Hanns and Maria Schaller. Under various owners the hotel amazingly survived all the difficulties of Europe through the centuries, including the 100 Year Wars of the 15th century, the Inquisition, the Reformation and Plague of the Middle Ages, and the Napoleonic Wars of the early 19th century. During these periods famous people like the Danish fairy tale writer Hans Christian Anderson, the Hungarian composer Franz Liszt, the German writer Heinrich Heine and many others came here frequently. The hotel also hosted many carnival parties. Also, the Emperor Maxmillian had as his secret lover the then hotel owner, Eloise Wober.

In 1903 the hotel came into the ownership of its present family when Maria and Johann Mayr leased the establishment. Mayrs purchased it in 1919, in spite of the extreme difficulties of World War I. The Roaring Twenties were a heyday for the Torbrau, famous throughout Europe for its extraordinary hospitality and comforts and its gracious hosts, who catered to many celebrities of the century. Because Munich is a marvelous German center of culture, the city was a favorite place for Hitler. In the early days the Third Reich grew up in this city, but when the hoteliers were asked to host the SS guards, the Mayrs who could not refuse, wisely said their hotel could not provide suitable accommodations that these people required, so it escaped hosting Hitler’s people and yet survived the regime. However, on December 17, 1944, the owners sat at the Isar Tor steps and watched as four bombs were dropped on their life work, and the hotel was nearly completely burned.

Immediately their daughter and her husband, Marielle and Sebastian Kirchlechner, began the rebuilding. Within a short time, by hand-cleaning the stones for reconstruction, they had salvaged sufficiently from the rubble enough material to reconstruct the building. Quickly the couple were able to re-open Torbrau Hotel for 60 guests who had to enter by climbing a ladder. Owned today by Walter and Werner Kirchlechner and their wives, the Hotel celebrated its 500-year anniversary in 1990. Werner Kirchlechner has been managing the hotel since 1993. The Torbrau has remained one of the finest unique hotels in Europe, under the capable management of the family, soon to pass to the fourth generation of managment. You’ll be most impressed by the excellent work and service of the director, Manfred Fritsch, and his assistant director, Michael Elfert. You’ll surely want to book this wonderful hotel for your next visit to Munich, or for attending the World Cup Soccer in summer of 2006.