Our concierge at the lovely Sheraton Hotel Libertador in Buenos Aires suggested that our fist special evening in his country should be our introduction to their national pride: The Tango. Of the many choices for a dinner show we were advised by several afficianados to select the Esquina Carlos Gardel Dinner show, named for the indisputable Tango idol if the early 1900’s where tango started in this El Abasto labor area. That famous singer instigated many street corner festive evenings of song and dance, and in 1893 a restaurant, Chanta Quatro, opened here where everyone gathered around Gardel. The same restaurant, renovated and expanded to its Art Noveau beauty of today, is where you’ll find your very best introduction to Tango in the classc style developed over a century right here in this place. This is the best choice for both the meal and the performance!

A van picked us up at the hotel to take us to the elegant theater, which is all in sophisticated black, white, and gold, with balcony tables and long tables of main floor seating. Every seat in the house is good. The meal is delicious with a full and varied menu from which to select your three courses. I had my first of the fork-tender, nearly an inch thick, juicy steak, the pride of Argentina. During our meal we enjoyed excellent wine and good conversation with international couples near us. We also watched a film which gave the history of Tango, Argentina’s international contribution to music and dance. 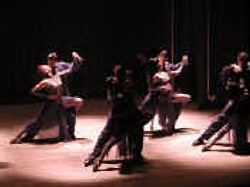 Following dinner the fabulous Tango Show gave us 90 minutes of thrilling entertainment. Five couples began dancing at the same time on the sophisticated and formal stage, each pair with its own unique style of dance, all in black and white sparkling costumes, depicting the early 1900’s when Tango music was began in the streets and brothels and gained popularity through guitar performances. Tango drew the young during the Roaring Twenties while being disparaged as scandalous and lewd by the older generations.

Perched above and just behind the dancers, the tango band played on a brass stage and consisted of a piano, a bass, two violins and an accordion, and a bandelino, with the artists dressed in formal attire. Their music was lively, syncopated, and sensual, providing the precise rhythms for the exquisite dances. Throughout the evening each couple took turns claiming the stage and innovating its own uniquely-stylized rendition of the basic eight steps of Tango. The glitzy, beaded dresses were split to the hip, low-cut, resembling swimsuits with scarves attached as skirts. Elaborately jeweled headdresses were reminiscent of flapper days. The men were formally dressed in various costumes to complement their partners’ attire. Locked together above the hips, the couples kept hips apart for the wildly fast kicks and turns in the sexy, intricate, lively, and faultless steps. We wondered how the dancers kept from tripping each other as their legs quickly intertwined and kicked in front and back in this fast-paced, energetic and beautiful ballet coupling.

The evening ended far too quickly, although it was after midnight. As we were driven in the van back to our hotel we noticed several pedestrian-only streets completely packed with people, like Bourbon Street in New Orleans. Discos, restaurants, and bars are popular from midnight til dawn on any night for those who can sleep in the morning, or function without. Morning seems to be the preferred sleep time for Argentinians. Because dinner is a several- hour, large meal sometime after 9:30 at night, breakfast is only coffee, juice, and maybe bread. Lunch, at any time in the afternoon, may be an omelette or sandwich. Many Argentinians enjoy teatime around 6 p.m., sipping their own mate tea from a gourd hollowed into a small cup with a silver rim and foot.

Buenos Aires province has 12 million people, about one third of Argentina’s entire population of 38 million.