I bound up the boulder steps of the Basin-Cascade trail tracing an energetic river graced with glistening waterfalls. While navigating the twisted roots of birch trees, I chanced a look to the heavens trembling with lemon leaves rustling in a flirtatious breeze. Relishing a moment of sacred solitude while waiting for the rest of my hiking group to join me at the base of Ellis Falls, I listened to the full throated roar of the powerful white curtain of water carving a path through sheer granite. The fragrance of balsam fir and the fecund odor of the gold and amber carpet of falling leaves filled the air. Like the poets, painters and millions of trampers before me, I’d come to the White Mountains of New Hampshire to rid myself of commercial chatter, pollution and to know Mother Nature’s healing heart.

Over 600 miles of well-marked paths lace our first National Forest. These trails seduce the hiker into shady glens through lacy fern forests and to alpine climbs pocked with turquoise glacier cirques. The Whites from a distance appear benign but are reputed to be intolerant and unpredictable. The weather at the top of Mt. Washington, the highest of the peaks in the Northeast (elevation 6290) has the worst weather in the world. Gusts of over one hundred miles per hour have been reported during all months of the year.

“Winds funnel into the canyons from several different directions creating churning whiteouts that blind hikers and stop rescue attempts,” our guide, Nichol, told us. Hikers get lost so often the good folks of New Hampshire now require them to pay for the cost of their rescue. With the aid of New England Hiking Holidays, I was able to explore with carefree abandon the fabled notches, intervales and peaks painted by over 400 landscape artists and listen to the stories the forests tell.

The median age of our group was fifty. Fitness levels ranged from recovering couch potato to personal-trainer buff. Many of the guests were seasoned, international travelers, and most had a few week-long hiking adventures under their belts. After hiking 5-7 miles each day, we enjoyed the luxury of the Thorn Hill Inn and Spa, where we could partake in a full massage, steam or hot tub under the stars. The sophistication of the group made for stimulating conversation over gourmet meals prepared by a chef with a flare for perfection. The Inn is located in Jackson, a village oozing with White Mountain charm; pumpkin men and ladies on the lawns, benches for strollers to enjoy, bright flower boxes and a red covered bridge spanning the Wildcat River that runs through the town. Two of our nights were spent in the Sugar Hill region at the lovingly restored Sunset House, built in 1882, overlooking a vast meadow dotted with wild turkey.

Amazingly, the group of eighteen settled naturally into two groups of nine with similar degrees of fitness and aspirations. Once my group caught up with me, we tramped together to Lonesome Lake, where we enjoyed a healthful repast at the friendly AMC hut maintained by the Appalachian Mountain Club, the oldest outdoor organization in the U.S. In our week we walked on several segments of the 2,125 mile Appalachian Trail that runs all the way from Maine to Georgia. In the sunny afternoon we circumnavigated the lake on boardwalks that kept us above the moose marsh surrounding the blue gem nestled in pines. I was struck by the fact that there were no mosquitoes swarming in what looked to be the perfect habitat.

“Fall is the best time to come here because there are no bugs.” Nichol explained. The pesky black flies of the summer months are at bay and ticks are out of season. The crisp nights bring out brilliant color in the foliage, but the days are in the seventies, perfect for the droves of leaf peepers who flock to the region this time of year.

On the way to the Basin hike, we passed by what remains of the Old Man in the Mountain. So loved was the jagged granite face carved by nature thousands of years ago he was put on state license plates. The “Old Man,” credited with being the guardian of the mountains, was held together for years with cables. Despite these efforts to save him, he came down in 2003. Now, he is affectionately referred to by locals as “Cliff.”
One day was spent exploring Crawford Notch, where Ethan Allan Crawford built the first hospitality house in the 1800s for the “rusticators” who came by train and stayed all summer. Tourists still pour off the train from Conway at the depot in the notch. Crawford also carved a trail to the top of Mt. Washington, which remains the oldest trail in continuous use in the United States.

After a saunter through the woods on a path of soft moss, we crossed a wooden bridge spanning a ravine where deep pools carved by the charging water serve as swimming holes for the intrepid in the summer. Soon, we arrived at the back door of the Mt. Washington Hotel. The last of the grand hotels, built in the 1800s, is a bit fussy for the Teva-set, but we were graciously allowed to enjoy a drink on the veranda. From there we watched the cog-train chug its way up the flank of Mt. Washington.

Mt. Washington was called the Place of the Storm Spirit by the Native Americans, who viewed it as the sacred home of the Great Spirit. The moody monarch, generally crowned with dark swirling clouds with a white cape on the shoulder was plainly visible in the cloudless blue sky. From the top of the mountain one may see Maine dotted with lakes, The Green Mountains of Vermont, the settlements of Bartlett and Conway, the four-toothed summit of Mt. Chocorua, and the other main peaks of the Presidential Range.

While relaxing at the hotel, our guide, Graham, who calls the Mt. Washington Valley home, shared the story of the Willey family with us. The Willeys were warned that they had built their home at the base of avalanche- prone mountain. So, they built a small shelter away from the house. When they heard the inevitable rumbling of a slide, the family of five went into the shelter. Unfortunately, the shelter, not the house, was crushed with all the Willeys in it. The site of the Willey family’s demise in 1826 was painted by Thomas Cole and is recognized as the best and most famous work of the White Mountain landscape artists. 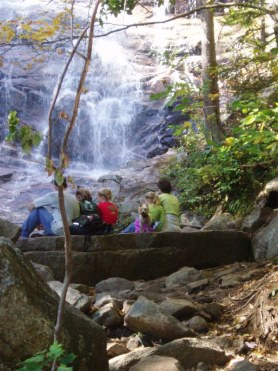 During our visit we hiked to Arethusa Falls, which at 200 feet is the highest of falls in the Whites, Sabbaday Falls, a picturesque series of cascades into a narrow channel, as well as Avalanche Falls in the dramatic Flume Gorge. But of the over one hundred waterfalls in the mountains, Crystal Cascade was my favorite. This most alluring rush of white plunges into staggered pools formed by boulders the size of a Volkswagen Bug. Twisted birch cling to the sheer granite walls that survive winters with snow so deep the cross country skiers have only the tree tops to find their way home. Nichol is one of the stout-hearted young men who carry their skis up to Tuckerman’s ravine, a huge glacier bowl above the falls, for a death-defying run down the mountain in the spring.

The bottom leg of the Basin-Cascade trail is a 2-mile mama bear run that follows the Pemigewasset River. It was to be our last stroll through burgundy and bronze, spiked with happy chartreuse leaves over head. Light streaming through the cathedral that is the woods spotlighted our path. I felt fortunate to have this quiet time free of cell-phone bleeps calling me back to duty. My internal tape had run clean during my week in the mountains, leaving me free to absorb the beauty all around me. I just hoped this calm feeling inside would stick. When we reached the Basin, a bowl gouged into solid rock from 25,000 years of hydraulic pounding, Nichol pointed to a rock formation under the water.

“They say that is the foot of the Old Man of the Mountain.”
“He must have been the first hiker to come here,” I said. “I bet it did him some good.”

New England Hiking Holidays offers all inclusive five-day trips from late June to early October. Prices before Sept. 18th $1,495. After Sept. 18th $1,595. In July and August they offer a gentle New England exploration that covers much of the same terrain of the other five day trips but focuses more on the rich history of the region. They also have 2-3 day trips available from May through Oct. from $885-$995.1-800-869-0949