As a native of Buenos Aires, Argentina, I have had the good fortune of studying in Dublin Ireland for the past two years, with the added bonus of traveling throughout Europe. Recently several friends and I traveled from Spain via the Trans Mediterranean ferry to Patras, Greece, a journey of seventeen hours. We slept on the roof of the boat with our sleeping bags and the backpacks as pillows. At Patras we ate some burgers and took the next train to Athens. We arrived about nine in the evening, and went to a cheap hotel in front of the Train Station, booked our room, and went back to the train station to inquire about the Istanbul train. The clerk told us that the last one before an impending train strike would depart soon, that same night. We were really tired after the ferry ride, but if we didn’t catch that train we would be stranded in Athens for most of our brief holiday. So we left Athens that night.

We lost our hotel money and took the twenty four hours trainride to Istanbul. We went to our little train beds and slept without waking up until we arrived at the Greco-Turquish frontier, where we spent a couple of hours till the Turkish train came to take us to Istanbul. The border police asked for our passports and 10 Euros to get the Visa to enter the country. We finally arrived in the evening at Istanbul, after a three-day, non-stop journey. We were really tired and dirty! One tiny guy approached us outside the Train Station and offered us a really nice hotel, cheap, in the Sultanhmet area, the city centre. A hot shower and good dinner were very welcome!

Istanbul is an amazing city. Chaotic, full of black and yellow cabs sailing through the maze of the street canals, women walking beside you with their bodies full covered in long black veils, contrasted with the other woman walking beside you showing their pierced-bellies and make up,, streets craftsmen sell their rings and collars sitting at the edge of a last model sale car agency. But fortunately it doesn’t loose it’s essence. Big ancient bazaar stores selling any type of species and herbal teas, miracle medicines and fruits and cheeses just like The Egyptian Bazaar, or if you want to buy first quality rugs, cushions, candles, any hand made craft you have The Graand Bazaar were bargaining is the only way to get a proper price. The experience of bargaining was not the same as in Morocco, but Enrico and Victoria were pretty excited and they even got the best deals. The city is divided by the Bosforo´s River in two main parts, the European, where the Sultanhmet area is, and the Asian part, more of the outskirts of the city. 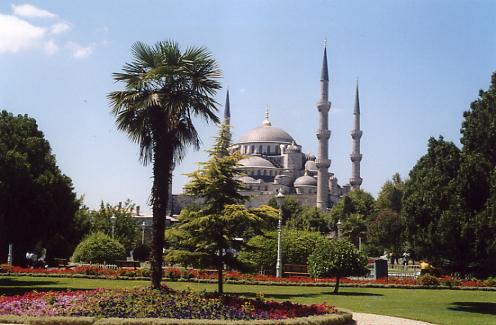 We spent the first two days exploring the European side, since there is where you have the main attractions like the Blue Mosque and the Aya Sofia. The last one was built as a church during the Eastern Roman Empire, but later during the Turquish “Reconquista” Revolt was transformed into a Mosque to finally be used as a museum, where you have to pay fifteen euros for the fee, comparing with other museums and places in the rest of the European capitals its not expensive, but with fifteen euros in Istanbul you eat in a very nice roof of a hotel looking at the Bosforo´s giving the back to the Blue Mosque. The Blue Mosque was the Sultan Hamet answer to the Aya Sofia, built two hundred years before. This was the first time that I’ve been inside a mosque, since in Morocco non Muslim people is forbidden to go inside of one. Men pray in the front of the mosque while the women hide themselves covering with black curtains at the back of the mosque, they are not allowed to pray with their husbands and sons. The mosques are full covered with rugs, so you have to take off your shoes and women, even tourist, have to wear a veil to cover their shoulders and part of the face. Great feeling when I touch the rugs with my bare feets. Architectonically speaking the city is beautiful, colour wooded houses, many of them almost falling from one side just like the one in Tim Burton’s Big Fish, nice seat-on-the-floor cafes where you can drink a tea and smoke fruit tobacco with a narguil, the view of loads of mosques with big towers and the chants of the calls for pray that makes you goose bump. 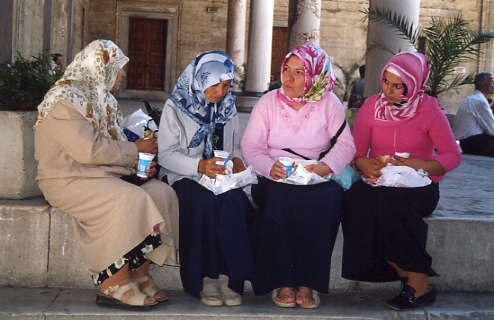 The Asian side is more of a real turquish experience, far away from multinational companies and hordes of tourists struggling to get inside the Aya Sofia. We’ve crossed the river walking by the bridge looking at fishermen throwing their canes as far as possible, and little kids selling fake black market watches. We’ve wondered about for a couple of hours till we stop for a quick lunch looking at some little boys happily jumping to the River from rocks, hurrying up to jump again. We took a ferry bus to another part of the city which is connected by many ferry-bus lines costing only one million turquish lira (one euro) for journeys of no more than forty minutes. We saw many street vendors, some mosques and the best views of the European side.

After the best four days of the holidays we took a bus south of Turkey, a little town we used as camping to wonder around the Trojan ruins. The town was called Cannakale, very quiet with a nice boardwalk bordering the sea. We met an Australian traveller at the bus who was on the way, he told us that after Turkey he was going to Jordan, Lebanon, Beirut, Israel and Egypt, I was really jealous. We shared a couple of beers with this guy, he was in Cannakale to see the rests of a battle field in an island and hour from the town, where thousand of Australians died in the second world war fighting for the English Crown. But we went to see the ruins of the lost city of Troy, I didn’t dig them, there’s nuthin´ to see and in the beginning of the ruins a local artist built a wooden horse, the one that Homer wrote about carrying hidden Greeks to burn the city, so what you imagine of Troy, the only thing you want to see, though its a fairy tale, they built it at the beginning of the ruins! The rest is only stones covered in dust and sun.

We left Cannakale for a five hour south midnight express bus trip to see the big ruins of Ephesus, considered to be one of the most important ruins in Europe Asia, nothing to envy the ones in Rome and Athens. Unfortunately the entrance fee was very expensive, we had to save some money for the rest of the holidays, so we decided to go to the paradise beach town of Cesme, where we had a nice salad lunch with a very funny Greek young doctor that travelled with a Swedish passport, waiting for the ferry to take us to Chios, a Greek island. We said goodbye to him and spent the night in Chios, probably the worst night of the trip, where we couldn’t sleep ´cause of the broken air conditionate, we had to open the windows and the noise of bikes and cars in the streets was so loud that we couldn’t stick an eye. The next morning, after a very long wait including a hopeless search for a Seven Up because I had an incredible pain in my stomach and Enrico sleeping like a homeless in a bench, we took the ferry to Mykonos, first stop on the Greek Cyclades Islands. 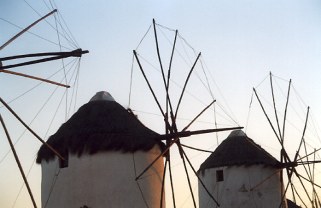 When you hear people talking non stop about the Greek islands, chances are they’re talking about the Cyclades. Mykonos was a very nice surprise, the ferry left us in the new port and we took a shuttle to the centre. We walked around with our backpacks looking for a place to crush, but everything was very expensive, so the three of us bought a twenty five euro tent and went to one of the campings, which was my first and only experience sleeping in a tent in Europe. It was a great decision, we saved some money and we enjoyed it. The camping was well equipped, and had a beautiful white sand beach with clear pale blue water. The town of Mykonos was just like I imagine, whitewashed houses, souvenirs shops, international cuisine restaurants with multilingual menus, great sea food, Greek music coming out from local houses with colourful flowers embellishing them. It was full of young people, mainly Italians, partying in the many night clubs. We spent a couple of days there relaxing from nine in the morning in the beach, and late afternoon walking around the town to see some sights. 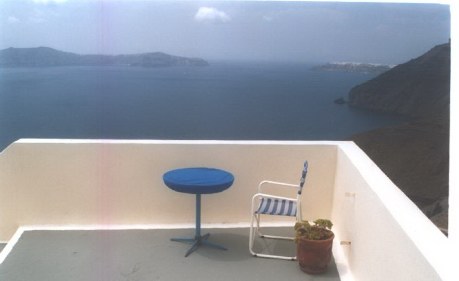 We were planning to go to Los, another island, but we couldn’t get a ticket so we decided to go to Paros, bigger but similar than Mykonos, again more beach and long walks during the sunset. We spent two more days there and left for the last island, Santorini. Also called Thera, Santorini is volcanic form island with black pebbled beaches. Whitewashed towns balanced on high hills, stone streets, crafts shop and the sunset from the western town of Ia. The most famous island in Greece really mobbed during the days we spent there. 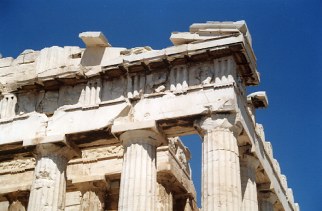 We took the last ferry to Athens and spent the last day of the holidays in the Greek capital. Beautiful city, big avenues, clean and noisy, old neighbours with lively streets full of tiny restaurants and street sellers, the Pantheon, amazing, best ruins that I’ve visited in Europe, got the classic photo where I stand in front of it with the hands on my waist. We saw the sunset from one of the hills that surround the city. We said goodbye to Enrico, so hard after living with him during twenty months, with Victoria we took the plane to London to connect for the last time with Dublin.”