Just an hour from Philly or New York City, there’s a seaside haven of rocking chairs on porches and a boardwalk bandstand, old-time penny candy and homemade ice cream, free parking, quiet streets, and more Victorian houses than the famed Cape May. It’s a magical place, transcendent, not unlike the setting of a really good beach book.

With a choice of 6 guest rooms, I stayed in the Venetian room, charming with its red and gold theme and elaborate wall fresco. Considered by many to be the most romantic room in the Inn, the Venetian room boats a huge bathroom with a shower built for two. There is also the Asian-themed Birdcage Room, The twin-bedded Rosebud Room, the quaint blue and white Toile Room, the British Colonial Paisley Room with a gentleman’s flair, and the lovely Lavender Room. Located beneath the Sea Spray Inn is Sea Spray Snacks, an informal and easy option for beach-goers. 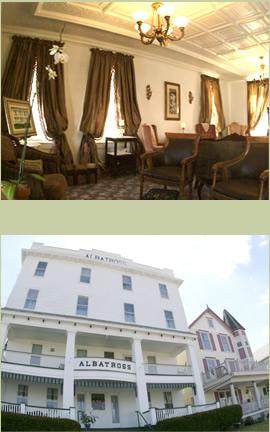 A great choice for families with toddlers or teens in tow is the Albatross Hotel, directly across the grass of Ocean Pathway from The Manchester. Owners Bill and Marcie Reiley are parents of a big brood, and cheerfully welcome tousling two-year-olds as well as sulking teens. “This is what life is all about!” says the perpetually unruffled Marcie.
The Albatross offers a clean and cozy stay, with delicious continental breakfast. “I love the cranberry/apple muffins,” raved one young guest as her sister munched on a bowl of Fruity Pebbles.
Guests love to return to The Albatross again and again, and many think of the Inn as their “home away from home.”
For families in search of an informal and comfortable hotel, the Ocean Vista is another fine choice. One of the few boardwalk properties, the Ocean Vista offers the mandatory porch with rockers, a continental breakfast and morning coffee, and affordable prices. That’s important. The house dog Pelle recently passed away, and so his beloved Frisbee, collar, and leash form a poignant altar in the lobby. Guests have been breaking down in tears upon finding that sweet old Pelle has died.
“He was loved,” says Diana Herr, owner/innkeeper. “He was really loved.”
And so is Ocean Grove.