The elevator doors opened and there he stood: tall (towering!), pierced, tattooed, and famous. Dennis Rodman. I tried to look jaded, and breezed past him with nary a glance, a la chic New Yorkers who are accustomed to notorious 6’7”celebrities standing outside of elevators.

“Wasn’t that Dennis Rodman?” whispered a woman – a tourist – in the hallway of the ultra-chic Manhattan hotel. I nodded, calm and collected until I entered my super-cool room at the super-cool boutique hotel The Alex. “I saw Dennis Rodman,” I blurted into my cell phone. I’d called home – Pennsylvania Dutch Country – to tell the peeps about my celebrity sighting.

“Oh, he was in the paper last night,” stated my teenage son. “He posed naked or something.”
“Cool,” I breathed. “And I saw him.”

Alex HotelThe Alex is notorious for attracting the elite. The not-so-elite come in search of sightings. The not-so-elite includes me: a journalist and children’s book author from Lancaster County. The only celebrities we encounter here are the Amish boys who made the Letterman Show when their drug ring was busted.

My stay at The Alex was sublime. Frette linens, a Sharp Aquos flat-screen TV in the bedroom. One in the living room. One in the bathroom. This place was Heaven. Signature bath products from Frederic Fekkai. Dean and Deluca snack trays. A limestone bath with a rain shower. A fully-equipped deluxe gourmet Poggen Pohl kitchen that included the sweetest refrigerator, oven, dishwasher, and stove I’d ever seen. I’m no Martha Stewart, and kitchens don’t ordinarily excite me, but this one was uber-sleek. Way nice. I admit that I spent some time just standing there looking at the appliances and pretending that they were mine. I also pretended that my suite at The Alex was my own apartment and that I was kind of a modern Mary Tyler Moore/That Girl working chick with a job that could afford the place.

I watched my LCD TV in the living room. I watched it in the bedroom. I watched it in the bathroom. It was lovely.
Designed by David Rockwell, The Alex consists of 203 impeccable guestrooms in mid-town Manhattan. The hotel offers a Girls’ Night Out Package, a Martini Package, a View From The Top Penthouse Package, and a Dinner at Riingo Package. Riingo isn’t a misspelled drummer’s name. It’s a fabulous restaurant, with mouthwatering food prepared by an award-winning chef who combines American with Japanese cuisine. It’s right next to The Alex, and you can have the meal delivered to your room, so that you can watch your flat-screen TV while eating. Or you could just take the elevator down, in hopes of running into Dennis Rodman along the way. 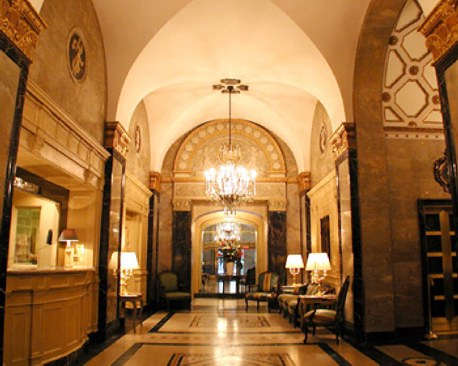 It was in another luxurious elevator in another luxurious hotel that I stumbled across my second celebrity encounter. My 14-year-old son Zach and I were staying at the Opened in 1927, the hotel maintains its exclusive standards with amenities like huge marble bathrooms (some with the original pedestal sinks.) If you’re lucky, you might get a fireplace suite. The door numbers are hand-painted, and the elevator attendants (two per elevator!) wear white gloves. It was one of the white-gloved men who gave a clue as to the next celebrity we were about to encounter.

“She’ll be here within 5 minutes,” he mumbled in a discreet tone to his fellow attendant. My son and I looked at each other and smiled. Celebrity. The elevator doors opened and we were on the lookout. We could feel the fame in the air of the ornate lobby, which is modeled after the Vatican Library. Heading out into the rainy night with a chocolate craving, Zach and I saw a limo pull up to the curb. Stepping out of the limo was a fur-coated, dark-haired pixie with black eyeliner. Lots of her trademark black eyeliner, and loads of mascara.

“Ohmigod,” I whispered. “Liza Minelli.”
“Who?” asked my teenage son.
“Tell you later,” I hissed. “Watch.”
Liza sashayed her way toward the doorman, her people in tow. I touched her arm, or rather, I touched her fur.
“Liza,” I said. “It’s lovely to see you. You look fabulous, dear.”
Liza batted her eyelashes. She batted them again. This required a lot of effort.
“Why, hello,” she said. “Lovely to see you, too.”
Obviously befuddled (and perhaps slightly drunk), Liza took the arm of her escort and left Zach and me hysterically giggling on Fifth Avenue.

“Holy crap,” said Zach. “She thought she knew you! Who was she, anyway?”
I explained Liza’s history, including the fact that she was Dorothy’s daughter: Dorothy from the Wizard of Oz!,
We returned to our suite, Snickers bars and Three Musketeers in tow, only to discover Belgian chocolates placed carefully on our plumped pillows. Jazz music was playing softly on the radio. The curtains had been drawn, and the lights dimmed.

The Waldorf-Astoria. Since 1893, the name has been the epitome of the quintessential luxury hotel. A world-renowned art deco treasure, the Park Avenue hotel is a grande old dame. There’s a grand staircase and a grand Starlight Roof and grand ice sculptures in the Peacock Alley restaurant. Even the butter pats are elegant here.
The lobby is beautiful. I could live in the lobby. It was there that I encountered the third celebrity: Donny Osmond.
“Ohmigod!” I gasped. “Donny Osmond!”

He smiled. He nodded. He shook my hand. He chatted. Donny was the second-place love of my life when I was 13, taking the runner-up position after David Cassidy. I didn’t tell him that. I told him that he was Number One.
Donny was gracious and kind. I was stammering and blushing. The guy who plays Luke on General Hospital rushed past as we schmoozed.

“Ohmigod!” I gasped. “The guy who plays Luke on General Hospital!”
Luke didn’t smile. “No autographs,” he said.
“I guess he figures that if you don’t know his name, you don’t deserve his signature,” Donny Osmond joked. He flashed his famous toothy grin. Donny was nice. He signed my hand. Call it Puppy Love if you want, but Donny Osmond was a sweetheart and he’s still pretty damn cute.

As Donny wrote on my hand, John Ritter walked past.
“Ohmigod! It’s John Ritter!” I said.
He smiled. He waved. He was on his way.
John Ritter is gone now, but I met him. It was just a moment, a brief blip in time, but our paths crossed before he left, in the lobby of the Waldorf-Astoria.