What’s exciting to do in Waco? More than you’d ever imagine!

All our lives we’d heard about Waco, Texas and, being Easterners, just the very name sounded so Western and so filled with “Heart-of-Texas” lore. We knew Waco was located on the longest river in Texas, the Brazos (840 miles long), and that it’s the home of Baylor University, but, other than that, we really didn’t know much about this one-of-a-kind city with its population of 120,000. In our minds, Waco had always been a remote city on a desert-like plain with not all that much to offer visitors. How wrong we were on both counts!

Waco does, of course, lie on a flat plain midway between Dallas and Austin. From that point our misconceptions only magnified themselves. Waco is far from being treeless. The city has many, many trees: pecans, live oaks, maples, and more. The city’s inviting, 416-acre Cameron Park actually boasts heavy stands of bamboo and other foliage literally resembling a Sumatran jungle.
Believe us, in a few days we were to learn that Waco really “swings open its ranch gates” for visitors, and we could hardly believe the wide variety of things we were able to see and do, all within a radius of a few square miles.
Just a few of the highlights of our exciting visit included a late afternoon and evening at the Cameron Park and Zoo. This remarkable zoo elicits an almost intimate feeling with its winding walkways and natural settings. We were lucky to have the fun of feeding three, full-grown giraffes a generous amount of carrots and Romaine lettuce. They leaned their long necks to the fencing and gently took the veggies from our hands with their long, thin tongues.

This is a superb zoo with its healthy looking elephants, rhinos, Indonesian tigers, alligators, leopards, playful meerkats, a huge aviary, bears, buffalo, and more. The zoo comprises 52 acres of the impressive Cameron Park that all lies within the city limits. That the zoo was selected to become a member of the Association of World Zoos is impressive.
For a little zoo trivia, we learned that Vern, the vulture, and his very evocative “wife,” Vivian, have produced more king vulture offspring thus far than any other pair in captivity. 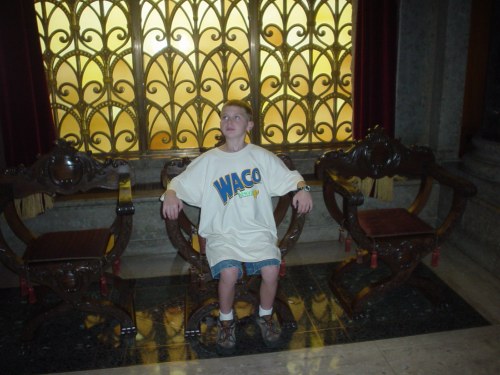 Another of our mornings was spent at the wonderful Armstrong Browning Library on the Baylor Campus. An English professor at Baylor, Dr. A. Joseph Armstrong, devoted his life to studying the poet, Robert Browning and his wife, Elizabeth Barrett Browning. He collected furniture, portraits, original manuscripts, letters, and other memorabilia belonging to the two poets, and everything is now carefully housed and displayed in this exquisitely elegant, Italianate building. The collection is the largest in the world of its kind, and the library is graced with sixty stained glass windows, most of which celebrate the work of these two prolific poets.
That isn’t all!
The new Mayborn Museum Complex, also on the Baylor Campus, would be a worthy addition to any major city in the country. Its focus on natural and cultural history, a fabulous mammoth exhibit, many interactive activities for all ages, science and weather exhibits. The Museum’s theme is: Engage, Explore, Enjoy!

For sports nuts, Waco is also home to the Texas Sports Hall–first state to have a sports hall of fame dedicated to heroes such as George Foreman and Babe Didrikson Zaharias. This center has lots of Dallas Cowboy lore, along with videos focusing on such things as the life of legendary coach, Tom Landry. A large expansion is being planned for this impressive center. 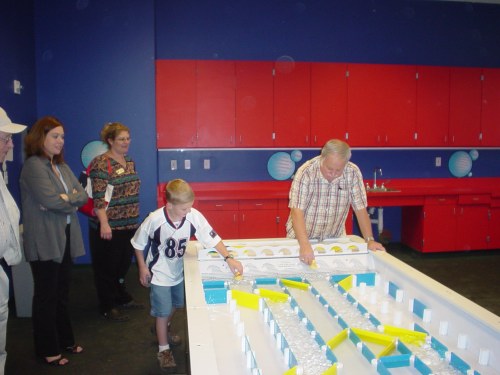 For those interested in history, there’s another hall of fame in Waco – the Texas Ranger Hall of Fame and Museum. This complex is dedicated to the history and memorabilia of the legendary Texas Rangers, oldest law enforcement agency in the nation and an ongoing symbol of the American West. A Bonnie and Clyde display is of particular interest.

We had the fun of spending the better part of yet another day at the Brazos de Dios Homestead, a Center for Essential Education. This traditional crafts village, located just a few miles from Waco, is where we stepped back into the days when people, as a group, sustained life on their own by utilizing the essential skills farming, blacksmithing, and pottery making. Thirty-five families have adopted this back-to-earth lifestyle and now live on the 550 acres of the site. Nondenominational, yet somewhat Mennonite in nature, the women at the Homestead wear plain dresses and hairstyles. They bake delicious breads, rolls, and pies, and serve homemade soups, salads, and sandwiches. The men, meanwhile, teach the younger generation horse farming, raising chickens, timber framing, metal casting, and boat building. There’s even an authentic 1760’s gristmill where wheat, corn, and other grains are milled for the families and their guests and visitors. The mill was transported from the East where it had been used in the Philadelphia area in the 1700’s to grind grain for Washington’s troops during the Revolutionary War.

Is there more to a visit to Waco? Yes!

Dr Pepper was invented in Waco in 1885 by Dr. Charles Alderton. The delightful Dr Pepper Museum has interactive exhibits that tell the story of the invention, and you can see a replica of the original drug store where it all came about, as well as enjoy some delicious ice cream at the old-fashioned soda fountain. Mmmm!

A center of the downtown area is the Waco suspension bridge over the Brazos where cowboys once drove their herds of cattle across the river on this part of the Old Chisholm Trail. You can still walk or drive over the well-preserved bridge that is now a National Historic Landmark.

We visited the Lake Waco and its nearby Wetlands on our way to the tiny crossroads town of Crawford, home of Bush’s “Western Whitehouse” ranch, located 17 miles west of Waco. We ate lunch at the only little restaurant and had to taste, of course, the President’s favorite, a juicy cheeseburger, complete with an appetizer of tangy, tasty fried pickles and Texas Toothpicks. Crawford, with its 705 residents, graciously welcomes its many curious visitors, and a few small gift shops flourish year-round. We topped it all off with a real “Heart-of-Texas” Rodeo, done only in the way Texas can do it – Great fun! Whether, it’s by plane, train, or automobile, Waco, Texas is a great place to visit.