With economic globalization on the march, countries are jockeying to take advantage of booming international travel. Through a fascinating non-profit program, nearly one million high school students in growing nations like Brazil, Hungary, Russia and South Africa have had the opportunity to explore an attractive career path in the travel and tourism industry, such an essential tool in their nations’ development. Using an innovative public-private partnership approach, local schools and institutions as well as global travel companies such as American Express, Hertz, KLM, Starwood and Lufthansa supported the Global Travel & Tourism Partnership (GTTP) program. Working across the globe, the GTTP sparks young peoples’ interest in the travel industry in schools from Sao Paulo, Brazil to Vladivostok, Russia.

The GTTP inspires youngsters to connect with their communities and engage with travel as a window into the vibrancy of their home country’s culture, history and economy. Students create studies and proposals on topics like developing Moscow’s 400-year-old underground into an adventure-tourism playground, utilizing hidden monks’ cells and secret subway lines. Other students are helping convert unused mining infrastructure in South Africa into an adventure tourism arena that would include underground canoeing and paint-balling. These young people learn about economic development opportunities and individual career paths in one of the world’s fastest-growing industries. And in some cases, the ideas they create foster real-world action!

Sometimes the case studies take shape as real programs. In Hungary, a group of students developed a case study on cliff climbing for blind youngsters that they put into action. In Ireland, a student case study suggested that the Irish Electricity Supply Board might reduce its dependency on the use of peat as an energy source by taking advantage of the country’s geographical location to generate alternative sources of energy, like wind power. Evidence of this development is now increasingly visible around the Irish coastline and in mountain regions.

The GTTP helps secondary school students in Brazil, Canada, Hong Kong, Hungary, Ireland, Jamaica, Russia, South Africa and the UK explore their culture while preparing them to ride the wave toward an opportunity-packed career path they might never have otherwise explored. Through the GTTP’s programming, students produce in-depth research projects that challenge them to critically examine their homeland’s attributes and drawbacks for tourism, pose creative questions and engage with local culture and history. The work culminates in an international case study competition that gives winners the opportunity to travel to Nice, France to present their work with other student winners from around the globe.

During this year, the GTTP expects to reach its one-million-students milestone. As the million-students mark approaches the organization’s executive director, Nancy Needham, will happily inform anyone who is interested about how this far-reaching global program is touching students from Cape Town, South Africa to British Columbia, Canada with the gift of broadened horizons that only travel can provide. The GTTP strives to stimulate interest in the Travel & Tourism industry by providing students an understanding of how the industry works. The GTTP works together with education authorities, tourism ministries, and Travel & Tourism companies.

Hong Kong, a city of skyscrapers and shopping malls, is surrounded by more than 260 outlying islands, countless small villages, 100 walking trails and four marine preserves. Two young residents, Kwok Ka Yin and Chan Wing Yan, put together the following itinerary as a guide to exploring the less-traveled areas as well as the sites in the heart of Hong Kong. These students at Hong Kong’s Kwun Tong Government Secondary School researched their recommendations as part of the annual Aldo Papone Case Writing Competition administered by the Global Travel & Tourism Partnership (GTTP). The topic for the competition was “Adventure Travel” to encourage original research and analysis and communication skills.

Day 1:
Rock climbing on any of the uninhabited series of 29 islands called the “Ninepin Group.” 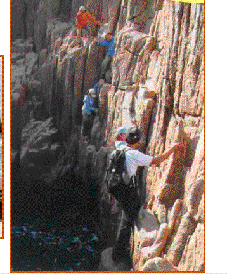 Hong Kong is geographically compact and many outlying islands in the territory feature steeply sloping hills and cliffs which are great arenas for rock climbing. Ninepin Group is located at the eastern tip of Hong Kong, and is made up of the North Ninepin Island, South Ninepin Island and East Ninepin Island and other inlets. They are all uninhabited remote inlands, deserted for a long time. The appeal of the islands lies in their extraordinary geological formations. Some resemble the honeycomb of giant bees and were created by the cooling down of very hot volcanic ash. These trips are physically assertive and involve different levels of risks and challenges.

Tung Ping Chau is a crescent-shaped outlying island at the most eastern end of Hong Kong’s waters and is sometimes nicknamed “the loneliest island” as it is more than 10 km away from any other part of Hong Kong but almost within swimming reach of the coast of Guangdong. Apart from the unique rock formations, the abandoned villages and the beaches are also its main attractions. The island and its surrounding waters were officially declared a marine park in 2001. The water here is some of the cleanest in Hong Kong and diving equipment can be rented on the island.

Lamma Island, also known as Po Liu Hau, is the third largest island in Hong Kong, with an area of 14 square kilometers and is for its rock formations. Archaeologists have found traces of settlements dating back 6,000 years. More recently the island has been developed into an expatriates community with European-style cafes and restaurants.

Po Toi covers just four square kilometers, has a handful of residents and the remains of a World War II Japanese barracks.

Tap Mun, or Tap Mun Chau in full, is a small island at the far east of Hong Kong. The name (in Chinese “Tap” means pagoda and “Mun” means door) was given because of the many large rocks lying along the costal line, emulating many pagodas guarding the water entrance to the Hong Kong territories. Tap Mun Chau covers an area of less than 2 square kilometers, and is quite flat: the highest point of the island being only 125 meters above sea level.Thanks to its small area and clear signage, a circuit tour around the island gives travelers an opportunity to experience local life , which includes a small village and the Tin Hau Temple.

The Yan Chau Tong Marine Park is located on the north east coast of Plover Cove Country Park which was designated on 5 July 1996. With a total sea area of about 680 hectares, the Park is an ideal place for sightseeing and discovery as a wide variety of landforms, such as bays, projecting headlands, peninsulas, rock cliffs, sand pits and beaches can be found within. Some local people even appreciate this area and called it “Mini Kweilin” in Hong Kong.

Hoi Ha Wan Marine Park is a sheltered bay located north of the Sai Kung West Country Park Covering an area of about 260 hectares, the park is one of the first group of Marine Parks established in Hong Kong and was designated in 1996.

They are all well-signposted and easy to follow. Among them, the MacLehose Trail, a ten-staged 100 kilometre-long Country Parks hiking trail offers memorable countryside experiences . The MacLehose Trail is divided into ten stages so exploring the trail is quite manageable if you do not wish to explore all 100 kilometres. As it covers the vast majority of the Hong Kong land area, the trail allows the trekkers to experience the most varied countryside. The east coast, where the Trail begins, is deeply indented and wild. The central mountains, which the MacLehose Trail crosses, include many of Hong Kong highest peaks. Finally, the western part, where the Trail winds to its end, has impressive valley reservoirs.

Among the ten stages, we find Stage Six most adventurous, as the Golden Peak Park is a natural habitat of indigenous monkeys. They are seen sunbathing, chasing one another or wandering around the Reservoir area. 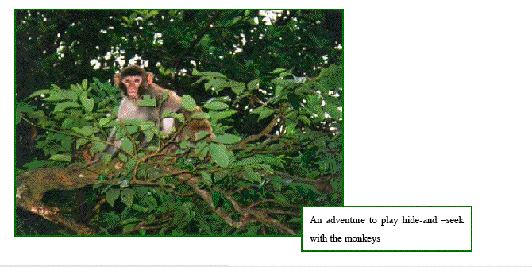 In addition to the walking trails, visitors might enjoy exploring the forest of Tai Po Kau, a specially protected area in the New Territories. It is widely regarded as Hong Kong’s richest and most ecologically important forest. Indeed, it was one of the first areas to be reforested and is consequently now one of the oldest and best maintained woodlands in the territory. The area of the reserve is 460 hectares, and covers the long-established forestry plantations. Tai Po Kau it is now home to numerous species of wildlife including pangolin, civets and barking deer. You may well also run into heavily equipped bird watchers and even a few woodland birds unique to the area. In late winter and early spring there are many beautiful butterflies.

For exploring Hong Kong’s culture consider going to Cheung Chau, a tiny dumbbell-shaped island located about 12 kilometers south of the Hong Kong Island. Meaning “Long Island” in Cantonese, it is one of the most popular islands in HK as it promises a mixture of the traditional and modern cultures. While the island is always packed with holiday makers and becomes a colourful Mediterranean style promenade, the traditional rituals and culture fascinate the inquisitive explorers and help them gain an insight into what like is like in traditional Chinese communities. The island is best known for its annual Bun Festival held in May, which includes street processions and tall “bun towers” made of bamboo and sweet buns.

Exploring the streets of Hong Kong Island is fun ,and a good start is in the Wanchai district, which offers a unique fusion of the old and the new. Once a barren, rocky bay on HK Island until 1921, when reclamation began, it has developed from a residential area to a prime centre of business, conventions, exhibitions, cultural and sports activities, entertainment and shopping. Despite world-acclaimed new architectural landmarks, traditional buildings stand side by side with their young counterparts in harmony and makes the city a mixing pot of old and new.

Also recommended is exploring the Sham Shui Po district on the Kowloon Peninsula. This is an older and poorer part of Hong Kong, home of the Apliu Street Flea Market, with a rich street life where snacks such as snake soup and turtle jelly are enjoyed.