The Burmese civil war, often viewed as a genocide committed against Burma’s tribal minorities, has been raging off and on for a period of nearly fifty years. Estimates claim that as many as two million refugees, many of the tribal peoples, have fled over the border into neighboring Thailand. The Long Neck Karen Tribe, so called because their women wear multiple neck rings which elongate the neck to several times normal size, have found refuge in artificial, tourist villages where visitors, both Thai and foreign, pay a heavy entrance fee to gawk at the unusual looking people.

One such tourism village is Hoy Sua Toa Long Neck Karen village, located in Thailand’s Mae Hong Song Province within sight of the Burmese border. After paying their entry, tourists will find that the entire village is one huge shop, with women and children selling goods and posing for photos. There are no Karen men to be seen. Traditionally, tribal people lack a merchant class, and yet the village is 100% dedicated to the sale of trinkets. Karen in Burma live by planting and cultivating rice, raising animals, and by hunting. In Hoy Sua Tao, however, there are no rice fields. Burma’s Long Neck Karen Hill Tribe chose exploitation in a tourist village rather than go back to a civil war which borders on genocide. “It’s their choice,” said Som Sak Seta, a guide who takes tourists to the Long Neck Karen Villages. “The Karen can make money, wearing their neck rings in the camp, or they can go back in the refugee camp. They don’t have a right to stay in Thailand. This is the compromise of the governors of this place, so the Karen can stay inside of the Thai border and make some money, and the governors can get some money as well.”

Ajan Prasit Leeprechaa, a lecturer at Chiang Mai University is himself a member of the Hmong tribe, a group persecuted in Lao, for fighting along side the Americans in the Indochina conflict. While countless Hmong families languish in refugee camps, awaiting resettlement in the USA, Ajan Prasit uses his education to study and help Thailand’s many tribal people.

Ajan Prasit explained the Karen predicament this way. “The Karen are faced with four options: Live in a tourist village, become official refugees, go back to the war in Burma, or now some countries like New Zealand offer them a chance to go live in cultural tourism villages abroad.” All of these options are only options if the tribal people are made aware of their rights, which most are not. The Long Neck Karen are typically singled out, because of their appearance, scooped up, and deposited in the tourism villages before reaching the UN camps. Allowing Long Neck Karen to gain refugee status would not be in the best business interest of the village owners, who collect money from the tourists. 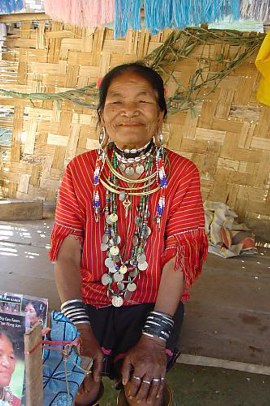 Owning a group of Karen is a lucrative business. “Some Thai made a fake village in Chiang Rai and Chiang Mai, and stole some Karen from here to live there. They charged 1,000 Baht or more for the entrance fee. But, the Mae Hong Song government went down and took them back here already.” Said Som Sak Seta. All legal residents of Thailand are given some type of an ID card, with various rights attached. Obviously, citizens get the most rights. Legal aliens may be granted rights such as employment or residence. Because the Long Neck Karen in the tourist villages have no legal status, they have no rights of residence, employment, or freedom of movement in Thailand.

A Long Neck Karin Karen girl named Mali told us she hadn’t been given any type of ID card, although she had already lived in Thailand for more than twelve years.
“Do you have any other papers for residence or anything?” I asked. “No, I don’t have anything. They just let me stay here.” “Can you go into town? Can you go into Mae Hong Song?”
“I can, but I can’t stay overnight. I can just go there and buy some food. Afterwards, I have to come back here. I have to stay here.”

In Myunmar (also called Burma), the Karen people would be engaging in agriculture as well as hunting and gathering forest products, as their people have done for centuries. But in the tourism villages, they work as full-time sellers of trinkets. Normally, the Karen culture would be tied to the land, the jungle, and the agricultural rhythms. As salespeople the Karen have lost their culture completely.
We asked Mali if her younger sister, who was born in Thailand, had an ID card. “No, no we don’t. None of us has an id card, none of us.” Said Mali.

Other Karen have explained that the Thai government is willing to give ID cards to babies born in Thailand, as long as the birth is registered. The same Karen said that they were either unaware of the law at the time their children were born, or that the owners of the villages actually prevented the Karen from obtaining ID cards for fear of losing revenues.
Mali explained how the Karen business worked. “If we stay here and wear the rings around our neck they will give us 1,500 Baht per month, each. But the men don’t get money because they don’t wear the rings.” 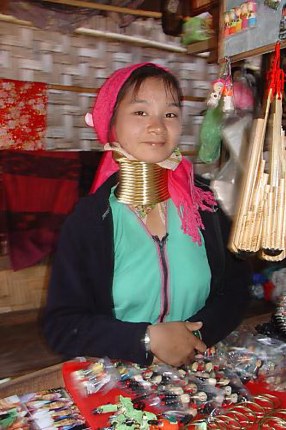 “Do they give you rice, something to eat here?” “Yes, they give us 180 Baht per person, per month. So, we take that money and we go to buy rice and food.” “If you don’t wear the rings, will they give you money? ” “No, if we don’t wear the rings, we don’t get the money. So, the men won’t get the 1500 Baht. They only get 180 Baht for rice, per month, per person.”
“Have you ever thought about going to work in town?” “No, I can’t go. I just can’t go.” “Have you ever thought about what kind of job you would want to get? ” “I have been thinking about that? Someday if I can, I would like to go to work in town. But, we wear this metal around our neck, so I don’t think we can go. I think we just can stay here and sell souvenirs.”

Thai spies, in yellow shirts, hung around, photographing my team and eves dropping on our conversations. Finally, to avoid putting ourselves or the Karen in jeopardy, we had Som Sak Seta take us to a “real” village, called Baan Nai Soi, where it was much easier to do interviews. Som Sak Seta explained the soldiers were only there to guard the border, merely a few kilometers away. While the soldiers sat on a cooler, sipping a coke, an eighteen year old Karen girl, named Zember, told her story. Zember only moved back to the village when she was about seven or eight, the age when girls take their first rings. She followed the custom, adding one ring per year, till she was sixteen. Finally, she had them removed in an attempt to gain more comprehensive citizenship rights and be able to migrate down to “urban” Mae Hong Son without being gawked at as a freak. Since removing the rings, she finds herself in a situation of double jeopardy. Now, not only does she still have the lowly status of being a stateless Karen refugee, living in a sideshow, but the Karen elders shun her as a traitor to the ring-wearing community. Zember said that she does make frequent trips down to the city during daylight . In recent years, Thailand, like many Asian countries, has been rewriting its laws to increase human rights and freedoms. The issues facing the tribal people do not seem to result from a lack of legislation, but rather, a lack of enforcement. Too often, it seems the whim of the local authority prevents people, both Thai and tribal, from accessing rights granted them by the federal government. High percentages of illiteracy and low levels of education among the tribal people also add to the problem.

Although none of the Karen came right out and said it, they must be living under tremendous pressure, knowing that they have no legal right of residence, no right to property ownership, and as far as they know, no access to legal recourse. Add war to this the ever present specter of deportation, where they are considered the enemy, and it is no wonder that the tribal people lack the internal strength to stand up for themselves. Tribal people tend to think in very tangible, concrete realities. As bad as the situation in Houy Sua Toa is, one reality which they see everyday is no one is shooting at them. Additionally, they have an income and they have their children and families with them. So, on some level, they are better off than they would be in Burma. And of course, at any time, they are free to return to the war.

The Puyai Ban, village owners who pocket most of the tourism revenue, evoke images of the war as a justification for what they are doing. Tourists, headed into Houy Sua Toa will notice a huge display of bombs and mines, right near the entrance. “They are just telling what kind of bombs and how bad it is for these people, so the tourists can know.” Explained Som Sak Seta. He told us that for a brief period the Thai government had been issuing ID cards to the Karen. “Now the Karen just don’t get the ID cards anymore.” Som Sak Seta. “They (Puyai Ban) prevent the people from becoming Thai citizens. They are trying not to give them anything.”

“If the government gives them the card and the people in charge of this income let them have the card and they become Thai citizens, the Long Neck Karen will disappear. So, no more income and no more attraction. They are trying to keep these people as Long Neck Karen and pay them 1500 Baht a moth, and keep them happy.” So, what if the Karen disappeared? Mae Hong Song province would just be short of income. Isn’t that so? “Usually there is a lot of income from foreign tourists. Normally the people who get the money for the entrance fee will develop the roads or build a temple or something in the village, but these people only develop their pockets.”

“The Karen said that if they had to relocate to another artificial village they would not go there. They would move into the refugee camp. They don’t want to go farther from the border, into the interior. Here, they have NGOs to look after them, like the UN. So, they might have a chance to go to a third country as refugees. Some of them have already moved to Holland, USA, and Australia. I think already, more than 500 have been resettled into third countries by aid organizations.” “If they stay here they are being pressured by the governors in charge. If they move into the NGOs it will be better for them; they have no freedom if they stay here.” The rings around their neck are cultural shackles. The Long Neck Karin are faced with a fatal alternative. Is it better to return to Burma and risk death, or better to remain as a stateless sideshow attraction in Thailand? On the other hand, the Long Neck Karin, because of their unique appearance, are the only one of Burma’s many ethnic minorities that have this option of escape.