I have visited Madrid, Barcelona and Seville many times but recently I discovered “The Most beautiful City in Spain”- Valencia. Then my adventure took me to a familiar stomping ground- Rioja. This is the story of my 10 days in Spain.

By the time you read this story the winner of the 32nd America’s Cup will have been decided. Not since 1851 has Europe hosted this venerable race which is the oldest active trophy in international sports, predating the modern Olympics by 45 years. In 2003 the Swiss boat defeated the New Zealand entry, in New Zealand. Not having an ocean, Switzerland put up for bids the location of their defense of the cup. Valencia won with an investment of over $235 million on a new harbor, a marina for 640 boats, docks, beaches, storage facilities, restaurants, entertainment venues and spectator comforts all befitting the over 2 million people who were expected in Valencia to view the races.

Learning about The America’s Cup is a lot like explaining cricket to an American. First there are a series of preliminary races to determine the boat that will race the Swiss. That is called The Louis Vuitton Cup. Larry Ellison of Oracle & BMW are co-sponsors of the American entry. Mr. Ellison’s 452 foot “cruise” ship Rising Sun was front and center outside the harbor. It was too large to berth. South Africa, China, Spain, New Zealand, Italy, France, Germany and Sweden competed in the elimination races. While I was in Valencia the wind died down and there were no races for several days. The finalists then compete in nine races to determine the winner of the America’s Cup.

Valencia has opened a metro line directly from the airport to the racing area and a new high speed train connects Valencia with all the major cities of Spain. It is the third biggest city in Spain after Madrid & Barcelona and the metro area has a population of around 1.8 million people. The Mediterranean climate has warm, dry summers and mild winters. The Silk Exchange from the 14th & 15th centuries has been designated a UNESCO World Heritage Site. The Central Market is one of the largest (26,250 foot) covered markets in Europe. Nearby are the 13th century cathedral and several museums.

The “golden age” of Valencia began a few years ago with the opening of the Hemispheric and its eye-shaped planetarium and IMAX theatre surrounded by a rectangle of water. The nearby City of Arts & Sciences is the largest cultural and leisure complex in Europe and contains a science museum, botanical gardens, planetarium, Marine Park (Europe’s largest aquarium) and opera house that rival Sydney’s in looks. It was designed by Valencia born architect Santiago Calatrava who is also the architect for the new Path station being built at NYC’s World Trade Center area. There is also a new Valencia Trade & Exhibition Center (Vinoelite took place here) with several multi-level buildings containing space for meetings, food service and trade shows. All of these architectural wonders did for Valencia what the Olympics did for Barcelona and the Guggenheim did for Bilbao. 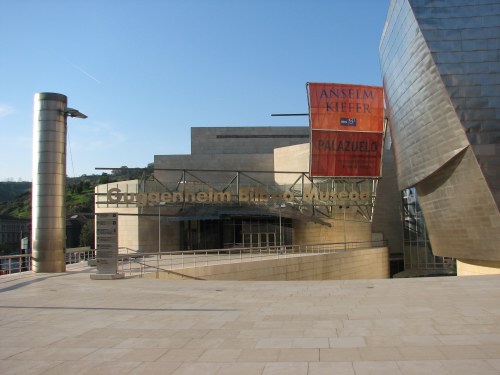 I was invited to Vinoelite, the first wine exhibit (100 exhibitors & over 5,000 trade visitors) sponsored by IVEX, the economic arm for all products in the Valencia region. There are 17 regions (states) in Spain and Valencia’s GNP is 12% of all of Spain. Think Valencia oranges, Paella Valencia, rice, wine, tourism and construction. The port is one of the busiest in Spain and handles 20% of the country’s exports. I was hard pressed to name a single wine from Valencia before attending Vinoelite. After visiting half a dozen wineries and tasting more than 50 wines my conclusion is- “the wines range from good to superb but very few have found US importers. Or, if they have, they are niche importers often covering just a few states.”

Grape varieties included: Mazuelo, Garnacha (Grenache), Tempranillo, Moscatel and Graciano. The venue for Vinoelite was beautiful but confusing. The names of the wineries were in very small print and not visible unless you walked right up to their booth. I had to ask several people to help me find wineries I wanted to visit. The seminars and tastings were the best thing about the show. I attended a fabulous tasting given by The Family Owned Wineries (Primum Familiae Vini), 11 wineries that are in private hands and include Antinori, Egon Muller, Mouton Rothschild, Torres, Drouhin, Hugel and Pol Roger Champagne. Since Robert Mondavi sold his winery there is no longer a US member. There were also 30 Masters of Wine present as part of their tour of Spain. Invited press included importers, sommeliers and wine writers from Poland, Mexico, China, US etc.

Ribero de Duero, Rueda, Priorat, Toro, Navarra are new names in the Spanish wine scene. And then, there is the old standby- Rioja.

My first trip was in 1964 while I lived and worked in Bordeaux. In 1977 there was a huge press trip to Jerez and then to Rioja. In the late 1990’s there was a small press trip only to Rioja and here I am in 2007. The kind folks from IVEX were happy to route my return trip to the US through Madrid so I could spend 4 days in Rioja, after the finish of Vinoelite. The PR firm handling the wines and region arranged my flight to Bilbao, my hotel stays and winery visits and got me back to Bilbao to see the Guggenheim Museum before returning home to the US. I wanted to know what Rioja was doing to reinforce its position as Spain’s number one wine region. My conclusions were more fruit forward wines, single vineyards, estate wines and cleaner, crisper white wines.

If you can possibly get a reservation at the Marques de Riscal Hotel, operated by Starwood as part of their Luxury Collection, grab it. Designed by renowned architect Frank O. Gehry, it is his second masterpiece in Spain, along with the Guggenheim Museum in Bilbao. With just 43 rooms, this is a tough ticket. It is a part of the City of Wine complex, with the winery only a hundred feet away. I recommend dinner in the Marques de Riscal restaurant with its 7 course Basque-Riojan tasting menu, with wine. The wine list features a selection of waters of the world (9 countries); 30 wines by the glass; 11 Riscal wines, 15 other Riojas, 10 other Spanish, 24 wines from Bordeaux, 4 from Burgundy and 5 champagnes. A bridge connects the main building to more rooms and the Vinotherapie Spa featuring wine therapy treatments, a fitness center, Jacuzzi, indoor pool and steam room.

I also visited the Dinastia Vivanco Wine Museum (El Museo de la Cultura del Vino) which is privately owned and includes a visit to their bodega. The 3,000 model corkscrew collection alone is worth the price of admission. Rioja is learning from many other countries and wine regions by erecting wine route signs.
My trip proved to me that you can teach “old dog’s new tricks” and make it work. Congratulations Valencia and Rioja, I look forward to my next trip.