I moved to China with my fiancé just over a month ago to teach English as a second language at a university in northeast China. Differences between life in Chicago and life on the other side of the world, in Qinhuangdao, a seaside city of almost three million, are as vast as to be expected. But big cultural differences in small, everyday rituals are what intrigue me the most.

Take the concept of a line, for example, at the bank. Should someone dare to break my set of rules and “cut” in Chicago, I might tap them on the shoulder and say, with a look that communicates Oh no you didn’t, “Excuse me, I was next. There is a line here.” An argument may or may not follow this perceived injustice. At my bank in China, a line is a guideline, not in any way a rule to be followed. If you are taking a long time with a teller, another customer might slide up to the window and make a case as to why he or she should be helped first.

And so, to blend harmoniously into my temporary society, I’ve spit in the face of some western manners that have been accepted norms since childhood. Yes. I cut. And it is starting to feel good. I repress my outrage when others cut, and it is getting easier. The following pieces of daily life are like this, one hundred eighty degrees different than what I’ve known, which is why, as I adapt to a new culture, I often feel as though I’m getting away with something. Keeping in mind that cultural rituals can differ vastly from region to region, and in some cases neighborhood to neighborhood, here are a few observations of my immediate surroundings. Here are a few customs travelers might expect to encounter:

“Don’t spit,” is what we’ve always been told. In the United States it is considered low-class, something reserved for tobacco chewers and those with generally bad manners. But here, expectorating is not as reviled; it’s normal and seen as necessary and healthy way to clear one’s throat of dust and phlegm, although it’s less common in more-educated cities than the countryside. Spitting, too, is more accepted when done in natural areas rather than on streets or indoors. The government tried to curtail the practice beginning in 2003 in Beijing, to help prevent the spread of SARS. In 2006, fines for spitting in Beijing were introduced in order to clean up the citizens’ imagefor the coming of the 2008 Olympics. News reports and my own students have told me that educated Chinese do view the practice as a bad habit. When we visited Beijing, we observed citizens both following the new rules and breaking them, though spitting in the capital was done far less than in our city.

I’ve tried to embrace phlegm-flinging in my own way: when I run. In Chicago, I would perhaps cover my mouth partially, aim into a trashcan or behind a tree when I spit. I’ve always been a phlegmy exerciser, you see. But here, I let loose my post-nasal drip with pride, wherever I may be running, whenever I feel the urge. I don’t look around first to make sure the area is clear of grandmas. No, I let it fly. I’m still working on really sucking my actually snot into my throat. I can’t seem to do it without activating my gag reflex!

Broken rule 2: “No shoes, no shirt, no service”

Of course the citizens of China wear shoes, but when hot, the men will simply remove their shirts in public. Women, who dress more conservatively than women in the US, of course, do not. The first time I observed a shirtless man was when I first arrived, at a restaurant in mid-September. I’ve also seen shirtless men on the bus. I am waiting for warm weather, when my fiancé might give this one a try. He can’t wait to bust the US shirt taboo.

“Do you always eat so quietly?” a student asked me as we enjoyed hot pot (Huo Guo), a Chinese fondue in which the diners sit around a boiling pot of flavorful broth to cook their own vegetables, tofu, noodles and meat. I thought about his question, and the admonition “Don’t slurp!” echoed in my head, a remnant of some childhood etiquette lesson. Why is it rude to slurp in the US? Who made up this rule? “It’s considered rude where I’m from, but I don’t know why,” I said. The Chinese do not mind a little noise made while eating; in fact, it is a sign you are enjoying your food. It’s also practical. Food, including soup, is served very, very hot. I find breaking my old rules to slurp and suck both soup and noodles to be very satisfying. However, in formal settings, I’m told, it is to be avoided.
There are in general fewer physical rules about eating here, but far more dinner customs and etiquette geared toward guest-host hierarchy. Among the other physical differences between table manners in the US and China: It is OK to put one’s elbows on the table. It is not a bad thing to get incredibly loud and rowdy at a restaurant at dinner. It is not OK to pick up a common dish and move it toward you; custom dictates that you are to move your bowl toward the common dish to get the food. You should leave a little bit on your plate at the end of the meal. It is a very bad idea to stick your chop sticks upright in your rice; this is seen as a bad omen. Sucking your noodles is only natural, and hunching and then bringing the bowl close to your face helps to do this.

Frankly, this has been the absolute hardest thing for me to get used to, let alone break. My goal is to one day be able to slide effortlessly into the first spot in line, something I’ve seen done especially well by Chinese grandmothers. Lines here are a loose guideline rather than a rule. A book I read described lines as more like a “swirling mass,” and that about sums it up. At places of travel, like train stations, lines are more like a crush. While returning from Beijing, a terminal packed with hundreds of people all pushed toward one open turnstile, for example. A nice older woman must have seen our panicky expressions and let us go in front of her to join the mass. In stores, I have finally worked up the courage at the store to just wriggle to the front and put my goods on the counter, whether there are people already there in front of me or not. Otherwise, I would never be served. 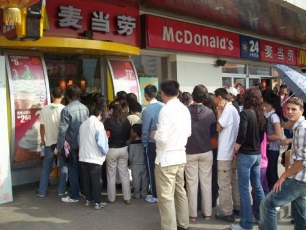 When I first arrived, I discussed the concept of the queue with my Chinese friend Luke (his chosen English name). “Is it that, people fear they won’t get the good or service? Do they think it will run out? They have to fight for what they have,” I guessed, dramatically. “No,” he said simply. “I think there are three reasons. In China, many people are not educated,” he said. “There are too many people. And, maybe they are just in a hurry.”

Public toilets, while enclosed in structure, sometimes have no stalls within, or only partial privacy, with no front door but side partitions. This has been interesting to get used to. I imagined that maybe it would be easier for the category of women who walk around stark naked in gym locker rooms. I do not fall in that category, though luckily, I’m also not the type who has phobia about “going” in public.

Bathrooms are also different in that there is no toilet bowl to sit on, but a squat pot, i.e., a hole in the ground. Sometimes toilets are hooked to a flush, sometimes the waste drops into the sewer system below directly. The smell is usually rank and ladies waiting in line cover their noses. There are “western” bowl-style toilets at some hotels and places like McDonald’s, though there are few of these establishments in Qinhuangdao. While squat pot bathrooms at my university and at gas stations and malls here have stalls, this is not always the case. Public bathrooms in my city have none. In Beijing, the bathrooms at the Palace Museum were like this. I felt sorry for the middle-aged British ladies in front of me, who said “Oh dear,” and looked at each other wide eyed and terrified as we entered the corrugated tin structure with a line of holes in the concrete ground that was the women’s room. But they got over themselves and so did I, dropping and squatting with the rest of them, totally exposed. I averted my eyes as a local woman squatted whilst reading her tour guide. My mind wandered: Could the bathroom squat be the secret to Chinese skinny thighs? I’m hoping my thighs will strengthen while my inhibitions about public bathroom business fade away, though I doubt I’ll be able to achieve total, ahem, success, like the local woman in Beijing.