People began congregating in the neighborhood of the Queen’s Hotel on the afternoon of October 1, 1887. Armed with crowbars, pickaxes and spades- the protesters began marching toward Latrigg, a favorite fell. They chanted “The lions of Keswick will break every chain, and open the footpaths, again and again.”

The object of their ire was Mr. Spending, the landowner that had closed the ancient pathway. His hired guards worked to build barricades of steel and logs topped with oozing black tar. This “crowbar brigade” was not going to cross his land. Anticipating small numbers, as in previous days, his hopes were dashed when the human mass poured forth from the valley below. Seeing the rubble, the crowd yelled “set fire to it”, and, for several moments, it appeared that would happen. Then Mr. Jenkinson, one of the leaders, climbed on top of the heap and with the help of others, cleared a path. Farther up the lane, more obstructions were knocked down until they reached their coveted mountaintop.

In the days, months, and years ahead, contrary to landowners’ desires, the English people would establish their right to roam on mountains and open spaces. One hundred and twenty years later, as I made my pilgrimage to the top of Latrigg, a soft mist rolled up from the peaceful village of Keswick. I silently thanked the band of warriors that had the foresight and determination to preserve this path for future generations. Their prudence and fortitude make England one of the most outstanding destinations for walkers today.

The Lake District in northwestern England is a prime destination for devout walkers. As a dedicated walker, not to be confused with alpinist, the Keswick area is my perfect match. This area offers recreational outlets for everyone from the casual day hiker to the serious mountain climber. The majority of well-maintained trails pass through privately owned lands ranging from small farms to wealthy estates. 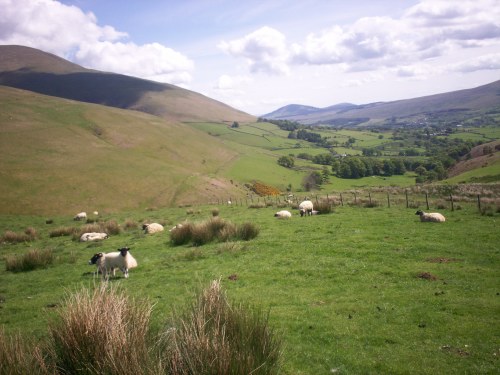 Keswick – pronounced “ke zick”- a small market town since 1276, is a convenient portal to the Lake District. Traveling by train from London (with one brief bus connection), I land in Keswick in the middle of Saturday market, people swarming the tents and hawkers selling their wares. Working my way through the crowds, I slowly move up the red brick street toward the reigning Moot Hall, a grey stone building with the famous one handed clock. Moot Hall is the home of Keswick’s Tourist Information Center, my first stop.

Armed with walking stick and water proofs (rain gear), I begin one of the many recommended hikes. The eight mile foot path gently winds around the Derwentwater, the third largest lake in the district. The first of many spellbinding views begins with Friar’s Crag, a grassy green promontory, which affords views across the lake of the Catbells, an emerald green fell with a lemon-shaped peak. These are the same views which inspired Wordsworth’s poems and Beatrix Potter’s beloved children’s stories.

The hills ring with the baas of sheep, confirming earlier signs on fence posts with warnings to keep dogs under control because it is lambing season. A fat old mother with dirty-yellow dreadlocks warily watches intruders. She hurriedly maneuvers her off-springs up the grassy knoll.

Spurts of rain are followed by soft shots of mist. Waiting out a downpour, a local rambler-dressed in hiking boots, and canary yellow rain-gear, provides a few sheep facts as we pass the time. “You think they all look alike, don’t you?” she asked. “There are over 19 breeds” she instructs, “but the old Herdwick is what we are best known for in these parts”. The lambs are born black and change to white as they age. True to a mother’s love, they know their own lamb’s baas amongst all the others. Most interesting is that the Herdwick is geographically bound, forcing landowners to sell land with the sheep in tow.

Realizing the English rain would not be ending anytime soon, we crunch forward on the wet gravel. The trail leads through bucolic pastures adorned with wildflowers in pastel hues of violent, blue, and yellow. Ramblers follow the trail signs over wooden boardwalks that perch on stilts above eco-sensitive marshes. Endless dry stone walls quarter the land. “Kissing gates”, self-closing, V-shaped contraptions allow passage. The gates were termed “kissing gates” because the custom was for the second person to kiss the first person before he or she was allowed through.

As I round the corner of the stone building at the Nichol End Marine, I hear a demanding bark of a dog. A group of walkers are standing next to the water’s edge, watching as black-and-white Border collie yelps at two young women. As one woman steps into the canoe, the other one pushes off. The dog leaps to the bow, front paws landing on the helm, her nose pointed into the wind.

Topping off the day, I land at Keswick’s Market Square at the Bank Pub. Since I visited on previous nights, the pub tender glanced up and immediately pulls a pint of my favorite rusty brown Snek Lifter. Regulars begin to enter the comfortable and unpretentious low wooden beamed rooms. Two old men, clad in identical tan corduroy jackets, gather to gossip and discuss world affairs with their contented border collies sleeping at their feet. Sipping my brew, I ponder experiences of early Lake District walkers through the lens of historic photos on the white washed stone walls. I once again thank those early warriors for having fought for the public rights of way, making this day possible for me and the many to follow.