Acapulco, Cancun, Iztapa-Zihuatanejo, Tijuana, Guadalajara and Mazatlan are cities in Mexico that I have visited in the past 10 years. An invitation to spend four days in Puerto Vallarta allowed me to visit “the friendliest city in the world” according to Conde Nast Traveler Magazine. Many airlines fly into the newly renovated and expanded Gustavo Diaz Ordaz International Airport, but I chose my favorite carrier- Continental. What was great about this trip was my ability to bring along my assistant Mark Owen who edits all my articles and maintains my website- http://www.ronkapon.com. Puerto Vallarta sits on the same latitude as the Hawaiian Islands, and enjoys a consistent sub-tropical climate throughout the year with the rainy season limited to June through September.

Puerto Vallarta is located in the state of Jalisco, on the Pacific coast of Mexico. It is the same state where Guadalajara and Tequila (yes there is a town with that name) are located. The area features 40 miles of coastline and includes tropical jungles, rocky river beds, steep mountain sides and arid flatlands. Its 220,000 residents welcome over 3.7 million visitors a year, second only to Cancun. It seems almost all of them come from North America, considering the passport line for Mexican citizens was empty and there were at least 500 people waiting on the visitor line. It is also a very popular port of call for cruise ships on Mexico’s Pacific Coast. The city was made famous (or infamous) by the 1964 movie Night of the Iguana, filmed entirely on location. John Huston was enamored with the city and built a house at a nearby isolated cove called Las Caletas (more of that later) where he lived part time until his death in 1987.

The city is divided into five parts. The South Shore is where the Sierra Madre Mountains meet Banderas Bay creating many secluded beaches, coves and rivers. Downtown and Los Muertos Beach is the heart of the city with restaurants, bars, nightlife and shopping. It is very walk-friendly with its cobble stoned streets, wrought-iron balconies and red-tiled roofs.

The Best of Puerto Vallarta

The Malecon (boardwalk) lines the beach for 10 blocks and is home to much of the sand sculpture and public art. Travel and Leisure Magazine named Puerto Vallarta the best beach in Latin America. It is here that the Arcos (Arches) lead to the town’s main square with their open air concerts and performances. The landmark Iglesia de Nuestra Senora de Guadalupe church is a must stop here. The Hotel Zone stretches from Downtown to Marina Vallarta and includes many high-rise condos, as well as hotels. We stayed in the Marina Vallarta area (Marriott- more later), Mexico’s largest with 500 slips, just minutes from the airport. There are shops, art galleries and restaurants as well as an 18-hole golf course. Nuevo Vallarta is a planned residential and resort community just north of the airport. 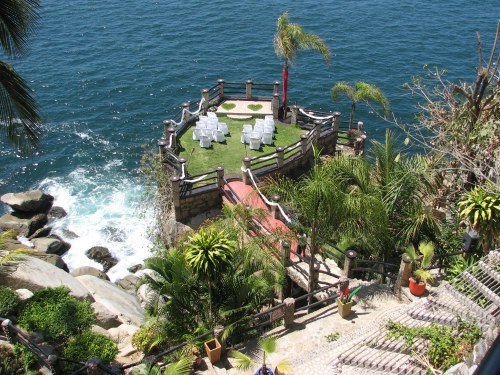 Best view of water from a restaurant – Le Kliff.

Perched on the edge of a cliff a short drive south of downtown it offers spectacular views of the ocean. The men’s room has a giant boulder formation over the urinals with constant water flowing. Seafood is their specialty.

Best view of the city from a restaurant – Vista Grill Restaurant and Lounge. Overlooks Puerto Vallarta and Banderas Bay. Temperature controlled wine room is next to the bar. It was awarded a Five Star Diamond Award from the American Academy of Hospitality Sciences. Sit outside on the multi-level terraces for a perfect view of the sunset.

Best children’s program and Spa. Best Tequila selection- Marriott Casa Magna Resort. The only hotel I have ever heard of that had its own resident clown to entertain the children of guests. The resort’s family pool includes a rock-garden island for the kids and in the water bar for the adult swimmers. The children’s club provides activities for kids 4-12. The hotel has its own tequila sommelier who oversees the collection of over 170 tequilas.

Most romantic hotel and best place to get married- Hacienda San Angel- 14 suites in this luxury boutique hotel located just up from the Guadalupe Church. There is a private chapel across the street for weddings with two suites for the bride and groom and their families.

Best in-town restaurant setting- Café des Artistes- Located downtown with two separate restaurants. We ate in the canopied multi-level garden with vertical lighting reflecting from the trees above the tables. They have a comprehensive wine library. “It is an environment in which patrons are inspired by the relationship between architecture and landscape”.

Best public art- Le Malecon- While we were there The Last Supper was on display made from the sand on the beach. There are also permanent sculpture pieces. Best beach- Las Caletas- Once the private home of film director John Huston, it is now a private beach hideaway (exclusive to Vallarta Adventure customers) on Banderas Bay accessible only by sea. This tropical beach hideaway has places for lunch/dinner, swimming, snorkeling, scuba diving, kayaking, sunbathing, strolling along the jungle paths or having a massage in the small hilltop spa. There is also a parrot, monkey, owl area with opportunities to learn about and pose with any or all of them. 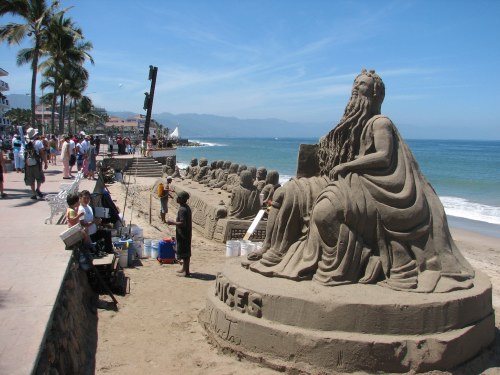 The best part of the trip was the reception accorded visitors. We were not treated as “gringos” but as friends. Tourism is the main industry and everyone we met treated us with respect. I can’t wait for my return visit.