I left the USA from Fort Myers,Florida at an unearthly time of day-9.30 in tthe morning-ok maybe its not an unearthly time for all of you out there, but what I had to face was a daunting., 23 hours of flying to Southeast Asia., Another world, somewhere mystical, I thought, reminiscing of my journey to Bangkok some 20 years ago. I knew it has a peaceful but hurried pace of life and was somewhere I thought would be a good starting point for my journey all around Asia.

I got to Detroit after a trouble-free flight from Florida, now thinking this is going to be easy. The North West airlines ogre at the counter harassed the woman in front of me for having too much luggage and in a surly way announced, “Well that’s your problem, Ma’am …pay the extra $25 or go get yourself an extra bag.” At which point she announced she only had four years till her retirement and she was not going to get reported for being rude and jeopardise that retirement!!!

Next came the TSA…a thankless job. I put down my tiny rucksack fitted with chains and padlocks to keep prying hands at bay when I put it down anywhere. Praying they were not going to make me unlock everything really did not do any good. I guess there was a line in the prayer department that morning as locks came off and investigative hands probed everything and asked far too many mundane questions.

With that done I was off to the Land of the Rising Sun. After sitting there for 13 hours my legs had all but gone to sleep, and now I know how it feels to have no legs, except, of course, for all the pain which resonated down my legs and the numbness of my right foot. The hours passed slowly as I looked at row after row of Asian faces all in the upright, fast asleep pose. Don’t Asians snore, I thought, perusing the assembled legions of faces… mmm, I guess not…Japan must be a quiet place at night, I thought to myself with a chuckle.

After eating my third meal of the day on NW Airlines, (mmm, gourmet it is not… and all on plastic trays, in fact plastic food on plastic trays!), I pondered what my insides were looking like right now?? We came in to land at Narita in Japan. What time it was and what day it was, I was uncertain. But just being able to move was a joy!

How different, I thought,Japan is such a breath of fresh air compared to the USA. The airport staff were so courteous, from the baggage handlers to everyone else who worked there. It was all orderly and clean beyond belief. It was as if none of them had hands… they all wore gloves and bowed and were ever so helpful and polite. Everything was just so meticulous, all on time and calculated. Nothing was off-kilter. it was, as Pink Floyd says, “the machine.” It was all so robotic in a way but nice, I have to say.

The bathrooms at the airport were incredibly spotless and the man who cleaned them seemed to take pride in his job, which others might have thought mundane. But this was his kingdom and he promised to keep it spick and span, through thick and thin. I saw him as the samura-mop in hand, guarding the entrance to his kingdom. Onwards! I thought as we boarded another plane for a further seven hour flight to Bangkok, that peaceful, fairly serene city of Southeast Asia.

Sawadii-The year of the Rat- was welcomed in ancient times as a protector and bringer of material prosperity. I’ve never been partial to rats, but then, who am I to argue with billions of Chinese, all celebrating? So finally, after another seven hours on the plane and five movies later, I can become a film critic, if anyone needs me to be??? 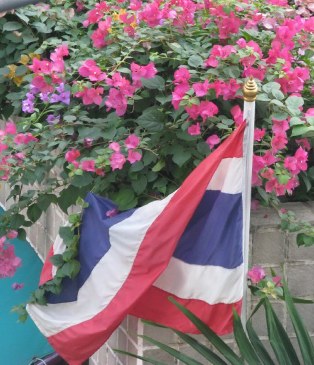 We come in to land in Bangkok… the city is aglow with orange lights for miles. This is not the Bangkok that I remember. It’s all changed! This has become an international city with tons of expatriates. The traffic is horrendous, even in the middle of the night, and you can cut the air with a knife the pollution is so bad! I board the bus which should take me downtown with a couple of fellow backpackers going to Khao San road, the haven of accomodations for backpackers, but I shall stay at a much more luxurious accomadation on Soi Road 8 off Sukumvit Road.

The bus drops me at what I thought was around the corner, to finally a bed, only to discover he has dropped me off in the middle of *&%***- nowhere, and it’s starting to rain. Being an adventurous and capable Brit, albeit with a limp, I wave a taxi and get taken to my base for the next few days. Trust me when I say luxurious, by whose standards I’m not too sure. I can barely get through the front door; i’ts so narrow… not made for strapping Americans. A bed, a chair, and a light, and a small balcony I can just about turn around on without falling over and dying…commiting suicide, as it would surely look to the police.

From here I gaze upwards on the white tower, an apartment block filled ,as it seems, by expats, all who have come seeking fame and fortune in the Far East. The Tower is guarded by sentinels, who check and recheck everybody that enters from their bouganvillia-adorned outpost. It strikes me, as I sip morning coffee on the balcony, that all who leave and go off to work for the multinational corporations here have no sense of what the real Thailand is about. They could basically be in any city in the world, as Bangkok has become a frenetic, hurried pace of life, abominable traffic and skyscrapers everywhere. These business people leave in their BMW’s and SUV’s and come back in the evening the same way as they left, never stopping to see what goes on in the Lane of Life. 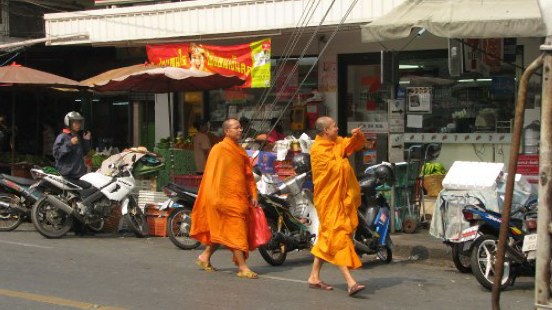 Let me explain this small street you could live all your life on and have what you need. There’s the wash shop, a hole in the wall with a washing machine. There are street sellers plying their food trade day and night; a barber; and then there are the bars and the ladies of the night…well, come to think of it, Ladies of the morning, afternoon, night, or whenever you are available, basically, and for such little pocket change. It’s so sad. There are the foot massager and all over massage shops, a tatoo artist, Indians and their restaurants…everything that one needs. But up there in the White Tower they are missing all that goes on in life down below.

I watch, taking it all in. I stop momentarily in a bar for a desperately-needed beer, to rejuvenate the spirit … you know what I mean!!!! I spy an Australian, seemingly lost in his thoughts. He’s the archetypical Aussie, a lined face, one hand on a beer the other with a cigarette, reading the morning copy of the Australian. I ponder why and what he’s doing here in Bangkok. He looks sad all wrapped up in his thoughts…no money, bad marriage…I know not why, but he just really looks incredibly sad. And just then, to lighten up the moment, a flower seller passes with gorgeous arrays of flowers on his cart but with slogans exalting Manchester United, and I chuckle.

But I digress; watching life as it unfolds on the Lane of Life, which is a far cry from what happens on the streets at the top of the Lane. I’ve missed out telling you of my first morning’s excursion. Not having slept in 23 hrs makes me feel like a zombie, and I catch a couple hours of sleep before I go to discover what else happens in Bangkok at 5:30 A.M. But thats for another story, which includes Bill from Saudi Arabia, The Russian from Georgia, the woman from the Kingdom of Saudi Arabia and her shopping and running foul of the Law…Was I to be imprisoned as in Midnight Express?