The moment I arrived from Paris to Russia, war broke out in Georgia and Ossetia, as a few close friends hastened to tell me on my Blackberry the millisecond I set foot in St. Petersburg. It made for interesting travel conversation. And tested the limits of once-ago glasnost and perestroika: Some were up to the contest; some were not.

Amazing how far-away-ness dims one’s need to be up on every single thing, but I did get into political discussions of the US presidential campaign, and of the lack of evidence of Jewish contributions to the Russians, monuments, signs, houses of worship and so on in the church- and cathedral/monastery/nunnery-rich landscape of Russia.

Strange for them to be so protective and proud of these obscenely gilded, artifact-choked venues of belief, when they have been so routinely atheist for so blatant a time. Not so strange was their instinct to defend Mamma Russia in the face of the world’s sound condemnation of Russia’s seemingly obvious aggression—whether to ‘warn the US not to overstep with reference to the Baltics joining NATO against their former patron,’ or for other Putinesque/KGB reasons we might not learn until some Muscovite historian scrivens the sorry details for us far observers, and it’s carried in the Times Literary Review.

No matter the ‘war,’ now presumptively laid tentatively to rest. Prices are astronomical. Billionaires abound –prices reflect an alarming casualness with poor people needing basics. Cars and consequent pollution smog up the works. Don’t drink the water, either. Kvass, though, is good. Despite its supposed non-alcohol content. Like drinking rye bread with a stomach ache.

Food is tasty, though ham and pork saturate every menu and meal and restaurant. I can now read in Russian, speak a few key phrases, and pretend I am part of their orgy of success of late–though the elderly babushkas (I saw hardly any old men anywhere) (one beggar, in Moscow, lay on the cobblestones of Red Square, surprisingly unechoed anywhere in the metro or the other streets) are still not rich, do menial work, are under-available — they close whole wings of the Hermitage, e.g, because there are too few ‘watchers’ to sit and keep guard over the priceless Surrealists and Impressionists and so on) and are still the backbone of neighborly nosiness and keep-to-yourself-ism.)

The subways are something. The escalators down to the subways are also something. I counted three minutes’ of descending. During the War, they were deep enough, and safe enough, to be bomb shelters for the citizens. They are a knockout. But I still prefer Singapore’s.

The young women are dressed to kill, with expensive high heels and high-high skirts, made-up to the nines, ensembles learnt from our glam mags and movies, but finessed a la Russe. They make our favorite actresses look dowdy, overweight and ugly by comparison. Still, the minute they are married or something, they resemble the Russian stereotypes of eld. 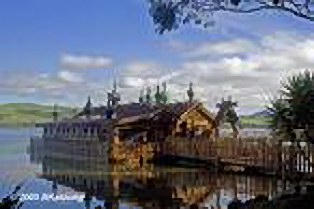 Dachas are big and eye-peeling. Yachts are in evidence along the Volga and Neva and Dvir, and the stores, such as GUM, are packed with goods from Italia, UK and France and the US–designer labels that cost a year of wages for the smallest bit of frou-frou.

Everyone has a hand out for bloviated prices, and the capitalist-phantasm is well-entrenched on the once-austere streets of most of the cities. There is disgust for even the attempt to bargain. Service industry is an alien term here; they are still at the ABCs of accommodating others. They are not very good yet. After a few days, they will reluctantly smile.

Embarrassment and fast-footwork over the Georgian enterprise, most people offhandedly telling one the “Georgians started it,” despite the Western ‘reality.’ People are quick to point out ethnics such as Kazakhstanis and Uzbeks, and their faces (and bodies) are distinguishable from the 90% mainstream Russians.

Russia is not the place it was. Flowerbeds adorn many a lawn, the dachas are summer’s hideaways for many, marriages are everywhere–I saw a minimum of 3 to 5 weddings a day in every place my foot set down. Even though divorce is a 50% discount of all marriages: Padlocks of all sorts and sizes attached to trees and gazebos and railings are supposed to ward off dissolution of marriages–not cheap ones, either–but don’t seem to do the magic they are invested to guarantee. Flats in St. Petersburg and Moscow are about $350,000 to several million, though they are mostly old and feature unshielded 40-W bulbs in dingy spaces. St. Petersburg is a northern Venice of gorgeous interlacing canals they fail to spackle with night lights for picturesque photographic yield. Of course, it was summer. It gets to -40oF or so in the winter, so maybe their first thought isn’t festooning the 39 canals with light-bulbs.

I sashayed around St. Pete, Yaroslava, Pushkin (the village), Uglich, Magornyi, Zagorzki and a few other places. That last is like a more interesting Vatican, frankly, with Russian Orthodox monks and high priest eminences in black headgear and skirts, and even a few nuns dressed similarly, walking among the faithful.

I was grateful for the many Russians seeking to pray to Jesus, frankly, as they represent another bulwark against the frightening juggernaut of Islamism run amok. I saw a number of hijab’ed women in Zagorski, strangely. In St. Pete, when I attended “Swan Lake” — playbill 500 roubles! thank you very much, not purchased–there were a few entire tiers of the refurbished and glittering theatre occupied by Muslim theatre-goers, I was surprised to note. The ladies wore large kerchiefs worn the way Russian bubbas used to (and still sometimes do), and few wore the hijab as we know it–but they were seated and snapping illicit telephone photos of the proceedings all the while, with their men seated near them. My travel companion, not that fluent in things English, whispered to me, “Mushrooms! Mushrooms.” She meant Muslims. It did seem odd to see them in a place where barefaced women went en pointe in diaphanous tutus and low-cut bodices. Muslims in Russia constitute 8% of the population. That is the second-largest bloc of ethnics in the nation, after the “Russian,” which is 85% or so. Wait a few years for the flare-ups of ungovernable “We wants!” from this segment.

My BlackBerry refused to connect to those contacts I needed to speak with in the rest of the world, though I had prudently paid for a chip enabling international calls. I fell into Dead Zones, apparently, every other hour. Not only did an official Russkie telephone lady inform me that the number I wanted was wrong, kaputyiski (it wasn’t) in Russian, but my email reception would go doggo for days on end. Nonetheless, there was comfort in carrying the leather-clad little bugger, in case it suddenly came to life with the latest in Obamessiah’s chosen acolyte VP or the running tally of dead or wounded in Ossetia by my gruff hosts. When the email did rouse itself to buzz in on vibration mode, my fellow writers overseas expressed concern, lest I too get blown away, as had four journalists thus far, even young as the war was.

In Zagorzki: Lots of women and children (some men, some little lads) kissing fetishes, crosses, coffins with saints’ blackened and hairy remains, icons, polished sarcophagi in all these ensembles of religiosity and prayer. Tiny girls wore kerchiefs, like their mums, as they whisked over the cobbles and prayed for blessings. As many tourists as anywhere except around the Kremlin. Thousands of believers, speaking many tongues, snaking into this exotic onion-domed chapel or that. In one sacristy, a five-pronged rough choir of elderly ladies sang in atonal sonorousness. In other ‘holy places,’ the choirs were extraordinarily beautiful, a capella, of course, and gave reason for the popularity of Gregorian chants in the musical canon. I was bewitched. But I did not buy their CDs ($50!) for remembrance.

I arrived on an “apple holiday” of sorts up there. Priests blessed apples that, once consumed, spread the benisons to one’s intestines and whatnot. For lunch, my restaurant not far away served me an apple–my order having been “fruit plate,” so I got a plate. And an earthy fruit–instead of ice cream. It was blemished, ungainly and not particularly enticing as a dessert. What made it most amusing, though, was the huge worm-hole in the side not facing me on my plate. I smiled and pointed to the black hole, and the waitress, in Cossack-red dirndl with rickrack (alas, polyester; I asked to see one outfit with a view to purchase) brought me one equally pulchritude-challenged, but lacking a readymade home for a creepy-crawly. I could not quite bear to bite into it, but thought it might be blessed, since this was the day for Apples Being Blessed, so took a nibbly gnaw for the blessing of it. Nyet. Nada. Nichi-voh.

The icons and paintings and gilt on every surface and ceiling and door are of course a treasury beyond counting, though it left me wondering why the serfs and kulaks and peasants had to visit their money while they starved in humble earthen huts and so on, while Catherine the Great gave platters of 18-carat gold away to her lovers as a knick-knack. Excess is a pallid account of the treasures of these obscenely wanton and spoilt czars and czarinas. Luckily, their penchant for assassinating and beheading each other, higgledy-piggledy, to ensure proper lineage and sovereignty occasionally relieved the populace of a few too-jarring rulers. Modern Putin, though, they seem to like quite a bit.
The dollar has been rising steadily, and is now a good 12% higher than at August first. So foreign tourists will stop buying up our cities, and our taxes will rise to make up the shortfall. Wall Street is slack, people losing their glossy jobs and tax-paying tickers, and Bloomberg will be looking for sources of revenue very soon, to hear tell the current mess. There was more, politics and expected arguments, but this is the accessible, acceptable stuff.