After carefully avoiding high mountain walls and nosing the plane down into s-curves paralleling the sinuous river below, the Druk Air pilot gave his passengers an unforgettable landing on the lone runway at the airport in Paro, Bhutan, the only level place in the entire country with enough length to land a commercial plane.

Grateful to be once more on terra firma, I was met by my driver, Dorje, and guide, Sonam, after I cleared customs. Dorje told me his Bhutanese name roughly translated to Thunderbolt in English, and Sonam told me his means Good Luck. Both good omens, I’d say. They spent seven days accommodating my every wish, ensuring my safety and educating me, as they provided a contemporary human contrast in this otherworldly country rich in spiritualism, Buddhist monasteries and religious history.
.
Prayer flags flutter; colorful strips of fabric send printed messages to the heavens. Travelers add their own silent dispatches, while spinning prayer wheels located in monasteries (called dzongs) or on town streets. This ethereal Himalayan kingdom appears to be a Shangri-la, but the Bhutanese government struggles to accomplish its goals of keeping the local culture and religion intact while dealing with difficult domestic economic and social problems and resisting the insistent pressures of tourism.
Travelers to this small country numbered fewer than 15,000 in 2005, and entry is strictly controlled by government visas handled exclusively by locally owned Bhutanese tour companies. Formerly, Bhutan was isolated by its geographical features; surrounded by mountain ranges and thick forests, it was able to retain its national identity, culture, religion, and native dress. Roads, hospitals, monetary system, telephones, television, and motorized transport have all been acquired since the 1960s. Believing that Bhutan should concentrate on developing its Gross National Happiness instead of its Gross National Product, the government limits the numbers of visas available for foreign visitors.

I chose to add a trip to Bhutan to a three week tour of northern India in April, 2006. With help from my tour leader in India and his Indian contact, Ranjith Henry (email address- kolam@vsnl.com), I selected Sakten Tours and Treks (www.bootan.com/sakten or email at sakten@druk.net.bt), a company headquartered in the capital of Thimphu. The 7 day tour by private car, hotel rooms and all meals, services of Dorje and Sonam, plus round trip air fare from New Delhi cost me approximately $2300. Since I was already traveling in India, my non-stop round-trip American Airlines flight from Chicago to New Delhi was previously booked and paid for.

Due to narrow mountain roads, traveling in Bhutan is time-consuming. Although it is about the size of Switzerland, seven days touring in Bhutan covers only the western half of the country. I wouldn’t recommend a shorter stay; and, if possible, I suggest spending 11 to 14 days in the country. I chose to spend time in Paro, a charming, quiet village and home to a historic fort and picturesque museum and monasteries; Thimphu, the capital and largest town; and Punakha and Wangdue Phodrang (affectionately called Wangdi by most). These two latter areas are home to huge, ornately decorated and brightly painted monasteries built in the 1600s. Photo opportunities abound!

Checking into the Gantey Hotel in Paro, I was shown to a room on the 2nd floor which overlooked the river valley, dzong, and unique shell-shaped National Museum on the far hillside, all of which I toured. Noticing a small sign at the reception desk advertising a hot stone bath for 650 Ngultrum, about $15 U.S., I promptly booked one for the following day, not knowing what pleasures were in store for me. When my hike up to view the famous Taktsang Monastery, also called Tiger’s Nest, was postponed due to rain, I gladly sipped hot tea and ate cookies as I waited for a local villager, Bai, to heat stones in a large fire near a shed behind the hotel where the hot stone baths are located. Three small wooden tubs greeted me. Each had dividers to keep the hot stones sectioned off from the soaking section, and I was grateful that I was the only guest parboiling in the sizzling water at this particular hour. Time stood still as I tried to relax for the suggested one hour’s stay. Giving up, I crawled out and collapsed on a nearby wooden bench waiting to regain my equilibrium and summon the energy to get dressed. This is definitely not an activity for the shy or faint of heart! Dorje had thoughtfully provided a post-hot stone bath treat of heated native wine, called ara, made from wheat. My Bhutan trip was off to a fun start as we sat in the hotel bar and drank this warm, pale yellow concoction complete with floating chaff (they drank more enthusiastically than I) while watching a hilarious Indian Bollywood movie about a magic car.

Dorje, my Amsterdam-educated driver, checks the temperature of my hot stone bath at the Gantey Palace Hotel in Paro.

Thimphu, the capital, is a town where almost anything can be purchased in the myriad of shops lining its main streets. The smallest national capital in the world with a population of about 75,000, it is home to a fairly large expatriate population who work for various international organizations. Against the backdrop of this bustling modern town filled with vehicles of all types and numerous construction sites are Bhutanese going about their work and schooling dressed in their native costume, at least during office and school hours. Males wear knee socks and the gho, a patterned knee-length robe of woven cotton tied tightly across the waist with extra material pouched above to function as a large pocket. Women and girls are attractively garbed in the kira, an ankle length dress.

My guide, Sonam, poses in his gho in the courtyard of the National Museum in Paro.

The National Memorial Chorten, located in the center of town, was recently built to honor the deceased father of the present king and is a sacred place to the Bhutanese, who prayerfully circumambulate it from morning to nightfall. While returning from a trip to the highest overlook near the Bhutan Broadcasting System, we visited the National Zoo, a large, fenced area housing only one variety of wild animal, the takin; all the other zoo animals having been released back to the wild in this nation of gentle people. The takin is the national animal of Bhutan and appears to be constructed from leftovers; the head of a goat appended onto the body of a cow. Thimphu is also home to many art workshops which train students in thangka (pronounced tong’ka) painting, wood carving, weaving and paper making. Nearby shops make these items available for purchase, though travelers should expect to pay in cash, as credit cards are still a novelty here.

Carving tools and crafts lie temporarily abandoned on a table in a Thimphu craft workshop.

On the drive to Punakha, we stopped at the 10,000’ pass, Dochu La, where a number of chortens or memorials (also called stupas in Sanskrit) and masses of prayer flags send respectful requests to the heavens for safe transit onwards for travelers climbing through this high pass near the confluence of two nearby rivers; both geological features are considered inauspicious for the Bhutanese and divine protection is deemed important, if not essential. In clear weather one can view the snow-capped Himalayan peaks marching in jagged formation across crystalline blue skies from the top of this pass.

The Punakha dzong, or monastery, was damaged in a recent flood and has been restored to one of the best and most picturesque examples of Bhutanese construction from the 17th century. It is worth at least an hour of your time to cross the small suspension bridge and explore the winter home for the monks of the central clergy of Bhutan. 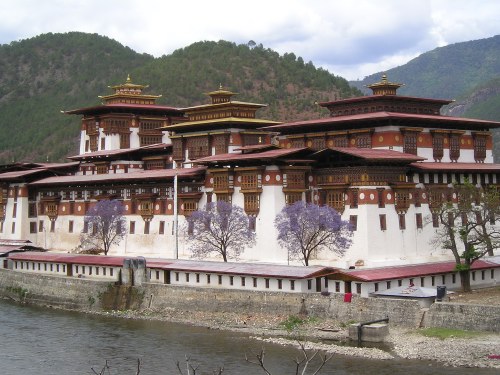 The recently restored Pungthang Dechen Dzong in Punakha, built as a monastery in 1637 was the capital of Bhutan from the time of nationhood in 1907 until 1955.

Two hours south is the town of Wangdue; its dzong hugging the top of a high hillside. Bursting at its seams due to increased population over the past 500 years, the town fears a devastating fire, and plans are being made to relocate it down the hillside to an open space now being laid out in grids. As you wind your way up and across the river to this impressive site, the picturesque village of stonemasons, Rinchengang, can be viewed. The ancient monastery will remain at its hilltop location casting its shadow on the surrounding villages and river and protecting travelers. My hotel, the Meri Phuenam, was new, clean and provided a idyllic setting to enjoy a cold beer and panoramic view of the river valley from its outdoor terrace.

Traveling in Bhutan is not only an eye-opening experience, but also provides a treasure trove of memories and mental images. However, travelers choosing to spend time in Bhutan must accept the fact that this is still an emerging country, without the typical support system for tourism. I found the hotels included in the least expensive tour with a fixed price of $200/day per person for a double (I paid $240/day as a single) to be clean and, for me, comfortable. All have private bathrooms, but expect the unexpected in décor. Beds and pillows are usually hard, and lighting may be dim. More upscale hotels, such as the recently opened 5-star Uma Resort Hotel and the Amankora Resort, are being built every year. These can be booked for an additional charge. The restaurants I frequented for lunch and dinner were selected by my guide. Six or seven different preordered dishes including rice, noodles, vegetables, meats and fish were served to my table or available on a buffet for me to choose from, and I never left hungry. Dessert was typically fruit, fresh or canned. Dorje and Sonam always chose to eat in the kitchen, savoring the hot chili dishes that make up their preferred diet. Be prepared for Nescafe and fried Spam for breakfast with toast and eggs, when available. Even though the food may occasionally disappoint, the service is always provided quickly and with a smile.

Sightseeing is unique in the sense that there are a limited number of sights to see in and around the towns. Be prepared to just enjoy being there in the present, and do explore on your own if you have an extra few hours of free time to walk around the towns. Crime against individuals is a rarity, and you will meet few other tourists (though when you do, they often are the same ones) as you go from point to point; unless, of course, you are attending a festival, which inundates the small towns with tourists and overloads the facilities. Also, a last caveat; nothing lies on a horizontal plane in this mountainous country. Every place you want to walk or every monastery, fort, museum or shop that you want to visit lies up or down hills and steps. Footing is uncertain, and the sleeping dogs do occasionally awaken and bite.