All over the village boys are fashioning bows from natural materials, preparing to compete in the big archery contest. Small children kick a Tagrow ball, a small hollow ball made of rattan. I pull out my camera, but the mothers quickly tell the children to hide their faces. Photographing people who are planning to live permanently at Loi Tailang is OK. But photographing civilians who plan to return to Burma is a No-no. If the photos get into the wrong hands, THEY, the SPDC, could find out that they have ties with the Shan State Army, and kill them. 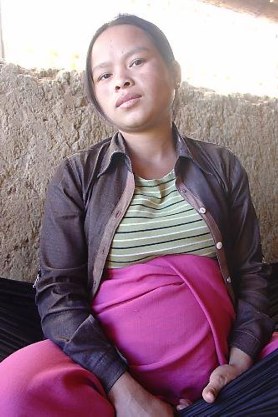 Just past the village square, we buy some treats at the SS Mart a convenience store chain, with three locations, conveniently located through out Loi Tailang. Each SS Mart proudly displays its colorful logo, with a Shan flag background. Perhaps you could be the first to open a franchise in your province. Walking along the main street, you won’t see the Cu Chi Tunnels, but the Shan have dug their own, less touristy tunnels and trenches as part of their defense system one more reminder that these kind, gentle people are living in a war zone.

There are about five restaurants in Loi Tailang, mostly serving noodles, which my translators Hsai Lern and Tun Yee love to eat. Some of the restaurants have my favorite, fried chicken. The boys know when I come to Loi Tailang they get to eat every time I do. They are always excited about eating noodles, it is a big treat for them. The normal Shan diet consists primarily of rice and soy bean. The Soy bean is sometimes ground and pressed into paddies, which are dried. These patties can be backed on a grill and used as a meat substitute. The other common source of protein is eggs. But not everyone can afford them. I let the guys order whatever they want.

In the school yard and in the various houses throughout the village, young people gather together to sing and play guitar. Singing clubs are easily the number one source of entertainment in Loi Tailang. Takraw is a close second. But nearly all Shan people sing well. They are the most musical people I have ever been around. When possible, the singing clubs like to hold a gin jot, a happy eating, when they all gather around mu gu taw, Thai barbecue. They sing and eat and drink beer, for hours, if they have the money. But for most of them this activity would be limited to Shan New Year when they get a small bonus from the Shan government. 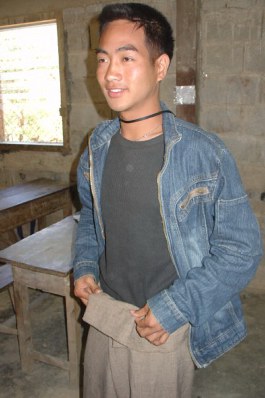 On Shan New Year, every soldier was give 200 Thai Baht. That night, all of the restaurants were full. Some soldiers had looked forward to eating noodles for months. The next day, there were gin jots in many houses. The Shan are normally a happy, positive people to be around, but when they have meat and beer, and there are guitars close by, there is no group I would rather be with.

Beside a small house, we meet a woman making thatch for roofs. It was toward the end of the dry season, when people would begin re-thatching their roofs in preparation for the rains. The army provides the civilians with food, but there isn’t a lot of cash floating around. Making and selling thatch is one way that people can earn extra money. The woman, Bamat, was forty-three years old and had lived in Loi Tailang for five years, since the SPDC had driven her people from their village. Now, her husband, an SSA soldier, was in hospital at Loi Tailang. He had injured his hand on a landmine out on the front lines. She had three of her children living with her. The other two left home, seeking work. She has had no word of them and doesn’t know if they are in Shan State or in Thailand. She told us that in the rainy season, they had a farm to grow some crops, but during dry season, she could only raise animals. The bulk of her family’s food came from an NGO who supports the IDPs. 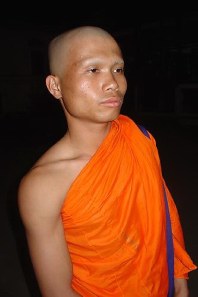 Most Shan would rather live free in their Shan State, but Bamat was not unhappy with her life in Loi Tailang. She was pleased that her children could attend the school on the base.
“It is safer here, and we have enough food. Back in Shan State, there was a school, but it cost money, so my children didn’t attend.”

The monk is Tun Yee, a young soldier, a former monk, who thought his family had been murdered. when he heard a rumor that his mother was alive in Thailand, he became a monk again and went with the head abbot to Thailand to look for his mother. Sadly, the story turned out to be a rumor. Shan people don’t have family names, so it is sometimes hard to match missing children with their parents.

At another home, an amputees, fifty-one year-old Tong Sai looked like he was seventy. He told us his sad story, of how the SPDC forced him to walk ahead of the Burmese army, as a human landmine detector. They had stolen him from his village and forced him to work as a slave, an unpaid porter, carrying the army’s heavy equipment through the jungle. He was initially arrested because the SPDC accused him of having had contact with the SSA rebels. After four years, they took him out of the jail and forced him to work forced labor.

“I was tortured frequently.” He told us. “We were fed a steady diet of soy bean and rice, twice a day. They forced us to work, digging by hand with no tools. And they beat us all the time.”

After he stepped on the landmine, the SPDC simply left him to slowly bleed to death. He spent six days, lying there, slowly dying, but luckily, he was found by an SSA patrol, who took him to Loi Tailang. In addition to tearing off one of his legs, the landmine had broken his remaining leg and one of his arms.

He showed us the massive, ghastly jagged scars on his elbow and his remaining leg.

“When I lay in the jungle, the insects were eating the flesh of my broken leg, and it never grew back.”

His leg wasn’t enough. The SPDC took even more from him. “I had a family before, but I haven’t seen them for years.” Unfortunately, he wasnt able to get a message to his family, so they think he is dead. He heard from others that his wife had remarried.

He didn’t have any information about his children. He shook his head and repeated. “They think I am dead.”

Tong Sai said he cant go back to Shan State. First of all, missing a leg, it would be impossible to walk so far. Even if he reached his village, the SPDC would arrest him, and probably torture and kill him.

“I will live here in safety till I die.”

He lives with another family now, and the children call him grandfather. He likes to come sit in the sun and watch all of the neighbor children playing football. When they take a break from their play, the children all gather around their adopted grandfather, climbing on his back or on his lap.

Hsai Lern told me that most of the children probably don’t have a grandfather because their grandfathers were lost in the war, or lived far away in Shan State.

I handed out cookies and drinks to the children. There wasn’t enough for all of them, so they imnmediately began sharing.

A little girl offered half of a cookie to Tong Sai. The old man smiled a toothless grin. The leg was missing, but his heart remained.