Florida has some very unexplored and beautiful places that are a must for travelers to see! Our trip to Florida consisted mainly of the sector between Fort Lauderdale, Key West and Miami. One of the smartest ways to get around the area is via hiring a car. Public transport is very hard to get around.

FORT LAUDERDALE
Fort Lauderdale, popularly known as the ‘Venice of America’ has become a major tourist destination over the years. Ft Lauderdale is typically more laidback than Hollywood and has some very interesting dining areas and nightlife. One of the important hotspots in Fort Lauderdale is the downtown area, especially around Las Olas Boulevard. The area has a number of new hotels and high-rise condominiums as well as boutiques, art galleries, and restaurants. Another interesting site to visit in the city is the Fort Lauderdale Swap Shop which boasts of the world’s largest drive-in movie theater with 13 screens. The Riverfront area and Beach Place make other fun visits.
Other special attractions include the IGFA Fishing Hall of Fame & Museum, that captures the thrill and beauty of recreational fishing from prehistoric times into the future. And if tropical gardens with birds and butterflies are your idea of fun, then head to Butterfly World for six aviaries, a bug zoo and a fascinating macaw landing!

MIAMI
At a distance of 26 miles away from Ft. Lauderdale lies the vibrant city of Miami. In terms of land area, Miami is one of the smallest major cities in the United States. Miami has been divided into a number of parts:

Downtown is the heart of Miami and is located on the east side. The area is South Florida’s main business district and home to several major financial and tourist attractions. Downtown has some fun joints to hang out in like Space, Nocturnal, PS14, Studio A, Circa 28, Grass, Karu & Y, Pawn Shop, Power Studios and Metropolis.
For a peek into the local music scene, Transit Lounge is a great place to go, as is Vagabond, Churchills and Circa 28 all of which offer a good mix of eclectic music and people. The southern side of Miami includes Coral way and Coconut Grove. Coconut Grove is a major hot spot for shopping. A popular hangout area, ‘The Grove’ has a number of clubs, one of the prime ones being Oxygen Lounge, which is underground. The western side of Miami includes Little Havana, West Flagler and Flagami. The area is home to a number of immigrants from Central America and Cuba. The area is also good for picking up some authentic Cuban food. Top picks include the Calle Ocho or Versailles. Stroll around to find cute little cigar shops and other little cafetarias there that provide a true Cuban feel. Sometimes if you are lucky, you might also catch some street action in the form of traditional festivals! Lastly, the northern side of Miami includes Midtown, a district with a great mix of diversity. 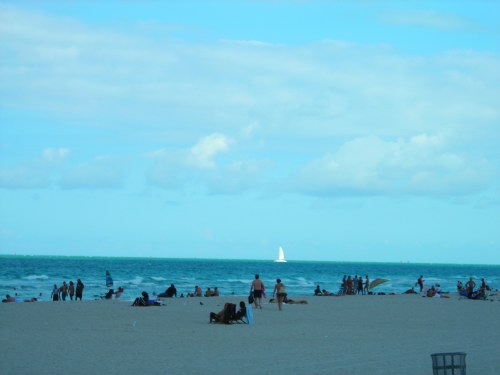 BEACHES
If beaches are what you love most, then remember the entire East coast in the area is a beach. So no matter where you are, head east until A1A and you should be walking distance from the beach. Some of the best beaches are on Key Biscayne, which is just south of Downtown Miami. At the end of the Key, lies Bill Baggs State Park and the Crandon Park, both of which make interesting sights.

South Beach
Undoubtedly, if you are looking to experience the real ‘glamour’ that Miami is famous for, head straight to South beach. Its main streets, namely Ocean Drive, Collins Avenue and Washington Avenue, are lined with hundreds of high-end stores, bars, boutique hotels and restaurants, making it a major entertainment hub. Ocean Drive is the easternmost street in South Beach and stems from south of First to 15th Street, running in a north-south direction. It is also home to several prominent restaurants, including News Café, Mango’s and the MTV-popularized Clevelander. Ocean Drive is also famous for being the site of Gianni Versace’s former ocean front mansion. The Carlyle Hotel on Ocean Drive near 13th Street is an iconic art deco landmark. Built in 1939, it is one of the most sought-after settings for photo shoots, televised programming and Hollywood films. Collins Avenue runs parallel to Ocean, one block west. Collins, too, is home to a number of historic art deco hotels and several nightclubs including Mynt and Rokbar.
Washington Avenue is one of the best-known streets in South Beach. Running parallel to Ocean and Collins, Washington is known for some of the world’s largest and most popular nightclubs like Crobar and Mansion.
South Beach has an active club and bar scene. It is host to more than 150 clubs and other venues, most of which close at 5 am. Overall, the clubs here have an exorbitant cover charge and are slightly overrated. Opium Garden, Prive, Snatch, Setai, Santo, Forge, Glass, Purdy Lounge and B.E.D. are some of the big names. There are also a number of fancy hotels in the area that are worth checking out. Try the Shore Club, a hotel with an outdoor lounge/pool area called Skybar. The hotel also has two restaurants downstairs called Ago serving Italian food and Nobu that serves sushi. Another promising experience is that of walking through Delano, another swanky hotel in the area.
A simply must-visit place to hit in South Beach is Lincoln Road, an open-air pedestrian mall as well as premiere hot spot for shopping. To spend a day of pure fun here, what is highly recommendable is to rent a scooter, eat Haitian food at Tap-Tap or Chinese food at Van Dyke’s and later proceed to Jazid for nightly music. An interesting way to spend time on Lincoln Road is by people-watching. For this, all you have to do is to get a meal in an outdoor restaurant. The area has several popular restaurants like Spris, Café Abacchi and Del Sole to choose from. If good Mexican food is what you crave, try the Homestead area in Florida City, which has a number of hole-in-wall type of places like Rosita’s, NicaMex or Los Azteca’s.

Apart from the above, South Beach is also one of the world’s foremost locations for fashion shoots, making Miami the model shoot capital of the United States. Approximately 1500 models live in the area, with many more arriving during the prime fashion shooting season between the months of October and March.

EVERGLADES
If nature is what gets you going, then a trip to the Everglades National Park should be high on your agenda. Right before dusk at the park, you might just be fortunate enough to spot an alligator coming out! There are also a number of interesting trails for visitors to walk through, the best being the Anhinga trail. The latter is a boardwalk and so involves easy walking. Here one can get to see a number of different birds, turtles and alligators. At Everglades, it is also possible to rent a kayak or canoe and spend time on the water. At the town of Homestead, there is also the Biscayne National Park where one can get a swamp boat ride or go on a glass bottom boat.

KEY WEST
Key West is an island-city perched on the southernmost tip of America. The city is located about 129 miles southwest of Miami and 106 miles northeast of Cuba. Key West is located on the dividing line between the Atlantic Ocean and the Gulf of Mexico, and stretches deep into the Atlantic Ocean.
The two main parts that the city is divided into are Old Town and New Town. The original Key West neighborhood in the west is called ‘Old Town’ and comprises the Key West Historic District includes the major tourist destinations of the island including Mallory Square, Duval Street, Truman Annex and Fort Zachary Taylor. The Duval street bar and restaurant district includes many different entertainment options, all within walking distance of each other. It is where you find classic bungalows and guest mansions.
The new section on the east is called ‘New Town’. It consists mainly of shopping centers, retail malls, residential areas, schools, ball parks as well as the Key West International Airport.

Many visitors rent a bicycle and explore the history and architecture of the Old Town. Walking tours, including a tour of the unusual Key West Cemetery, are also available. The Sunset Celebration at Mallory Square is a daily spectacle for visitors and residents. It is at this point that one gets to view a unique display of artists, vendors and other animation amidst a crowded street across from the ocean. The beauty of it all is unmatched and boat excursions and tours further provide an interesting way to view Key West from the water. A number of renowned artists and writers have passed through Key West, but the two most famous names associated with the island are Ernest Hemingway and Tennessee Williams. Nobel Prize-winning author Hemingway’s former house is in the Old Town, where he lived and worked for ten years, and is now open to the public as a museum. It is undoubtedly one of the most famous tourist spots in all of Key West. Legend has it that Ernest Hemingway wrote ‘A Farewell to Arms’ while living above the show room of a Key West Ford dealership at 314 Simonton Street. Hardware store owner Charles Thompson introduced Hemingway to deep sea fishing. Among the group that went fishing was Joe Russell, also known as Sloppy Joe. On Duval Street today, there is a pub by the same name.