The postcard was of the Spanish Steps in Rome and it showed a brightly colored tranquil and pleasant scene.

Five or six seemingly happy or contented people were sitting or lounging around the famed broad steps in the mid-day gold, sun-kissed Italian scene. Two in the picture looked to be lovers, another- a possible poet stared longingly at the nearby Keats-Shelley House, while the others had the expressions of genuinely satisfied tourists.

“Looks a little different than it does in the postcard,” said my wife glancing from the picture to the approximately four million, three hundred and thirty five thousand, two hundred and seventy two other tourists who just also happened to be visiting the steps at the same precise moment we were visiting the famous Roman landmark. An army of tourists and determined tour guides swiftly flowed up the 132 steps.

“Yeah, a little,” I said, as the surging crowd bumped and jostled us as we took it in the setting, or tried to. We quickly sought refuge behind a souvenir cart, the way some trout find pools away from a raging white water current. She was clinging onto my eleven year old daughter’s hand tightly, so she wouldn’t be swept away in the global swarming.

“Can you give me a hand?”
“I would, but, as you can see, I have my hands filled with a melting lemon gilatto,” I said and then added, “Look. She’ll only pull you in with her. Let her go. We have others kids.”

Once reeled in and safely behind the stand both my wife and daughter glared at me.
“What?” I said.
“Let her go. We have other kids?” said my daughter with more than a little indignation that should be possible from a child her age. Her mother was so proud.

“He’s joking, honey,” replied my wife, while my daughter held her judgment.
“So, creative postcarding, you think?” I said quickly changing the subject and drawing their attention back to the steps. 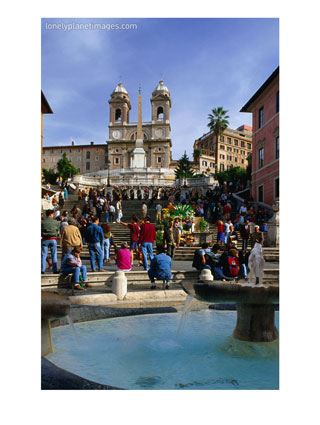 “Definitely selling the sizzle.”
That’s the trouble with postcards, travel posters or guide book photos of famous landmarks and historic places. More often than not they only show the romanticized or idealized views; views we would like to see, even if at times they are hard to find and difficult to duplicate.

It is smart marketing because attractive views do a lot to sell a popular destination. Whether it’s the Eiffel Tower in Paris, Big Ben in London, the Coliseum in Rome, Disney’s Magic Kingdom in Orlando, or any one of a number of popular locations, what we envisioned before we arrived owes a lot to creative photography.

Let’s be real: scenes that show row after row of diagonally parked tour buses or long serpentine lines of bored or agitated tourists waiting to get into wherever and whatever particular and popular site or monument aren’t exactly appealing. Those marketing the meat of the site, those purveyors of place, sell the sizzle, flavor and fire but seldom mention the actual heat. 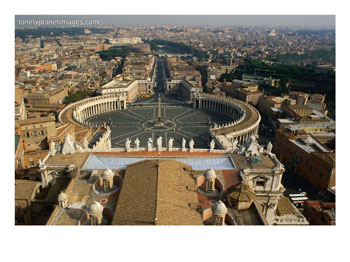 And speaking of heat, at St. Peter’s Square at the Vatican our one hour wait to get into the cathedral was in the one hundred degree (in early April Spring and not the more bust summer months) heat. Sun-burned necks and noses became common for those who didn’t have hats or umbrellas.

Afterwards, when I glanced at a postcard in the Vatican Post Office, I chuckled. The postcard showed a nearly empty view of the square in muted, soft lighted tones. It was a small sin of omission but then theVatican isn’t alone. 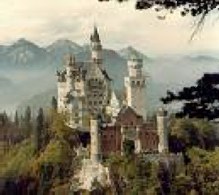 Ever see a poster or travel brochure picture of mad King Ludwig’s fairy tale like Neuschwanstein Castle in Bavaria? It’s something, isn’t it? Well, from some views it can be. In fact, at certain times of the day- usually in the morning – you can find just the right angle and light to get your own interesting and even artistic photographs as well. This strategy works well in the late afternoon too, once the large crowds have thinned a bit and you’ve staked out your view of interest.

During the summer months- May through September the world-favorite tourist spots become flooded with camera clickers and adoring, semi-adoring, or not so adoring visitors. Crowds, cranks, and crass commercialism steal some of the luster and charm while the idealized photos and even some of your own can give some of it back.
In the off-season and winter months the sites take on different character and the winter tilt of the light adds a different dimension to the photographs.

So, when you plan your trip to Europe or any other popular destination, think beyond the picture. Consider the time of the year, the popularity of the place, and toss in a certain amount of patience and understanding too.

Oh yeah, and buy the postcards anyway to look back on where you went, if only to grin, smile, or swear. Crowded as the sites are, many of us still opt for the idealized postcard views anyway. After all, it’s what we all want to see.

When I said as much to my wife and daughter they nodded.
“Pictures sometimes lie,” said Katherine, while my daughter agreed with an almost angelic-like grin.

“Uh-huh,” she said. “In your wedding pictures you actually look intelligent.”