Valley Forge: In the winter of 1777- 1778 General George Washington picked the Valley Forge area to encamp and train his Continental Army into a fighting unit. No battles were fought yet some 2,000 (out of 12,000) soldiers died from hunger and disease. “To see the men without clothes, blankets, shoes, or a hut yet submitting without a murmur is proof of obedience.” The Continental Army arrived at Valley Forge on December 19th, 1777, after a tough campaign of battles with the British. General Washington’s forces were the most racially diverse of any US army (until Vietnam) with almost 5,000 soldiers of African descent and members of the Oneida Indian Nation also participating. The Valley Forge National Historical Park has Washington’s original headquarters (under renovation when I visited), the log cabins housing officers and soldiers and statues and monuments throughout the park.

I visited the home commandeered by Baron Friedrick von Steuben who was in charge of training Washington’s army. The park is right off the Pennsylvania turnpike and the Welcome Center features exhibits, artifacts and an 18-minute introductory film. One of the park rangers (part of the National Park Service) took us on a scenic tour throughout the park, which weaves in and out of local streets. The hardships of ordinary soldiers has become legendary and made Valley Forge a renowned part of the American Revolution. There are 30 miles of trails for walking or biking. If you have a cell phone you can call (484) 396-1018, press the stop number and listen to a short explanation about that location.

There are other notable historical sites to visit in the area. The John James Audubon Center at Mill Grove has 175 acres as a haven for birds and wildlife. There are seven miles of trails and a stone farmhouse that was the first American home to John James Audubon. It is now a museum displaying original Audubon prints, oil paintings and Audubon memorabilia. The Wharton Esherick Museum in Paoli was the home of the “Dean of American Craftsmen.” On display are many of his original furniture designs. The Stoogeum is the world’s first and only museum of Three Stooges memorabilia. With close to 100,000 pieces of Stoogeabilia the museum is open by appointment only. It is also the headquarters of the Three Stooges Fan Club that has an annual meeting of relatives, impersonators and fans. The Barnes Foundation, founded by Albert Barnes in 1922, houses one of the finest collections of French Impressionist, Post-Impressionist, and early modern paintings in the world. There are 181 Renoirs, 69 Cézannes, 59 Matisse’s and 46 Picassos as well as many others. It is moving from Merion to Philadelphia sometime in 2009.

I stayed at the Crowne Plaza Hotel Valley Forge which is located directly across from the King of Prussia Mall. With 3 million square feet it is the largest mall in the US in terms of retail space. Lunch was at Creed’s Seafood & Steaks directly off the Pennsylvania Turnpike and dinner was at Legal Sea Food, also within the King of Prussia Mall. The whole area is just 25 minutes northwest of Center City Philadelphia. 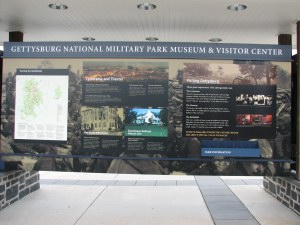 Gettysburg: It is about 2 1/2 hours from Valley Forge to Gettysburg, Pennsylvania, where I was invited for the 145th anniversary of President Abraham Lincoln’s Gettysburg Address. The issue of slavery precipitated the war with the North opposing it and the South’s economy (cotton) depending on it. The Battle of Gettysburg (present population of 7,800) took place July 1-3, 1863 with the largest number of casualties in the American Civil War (over 51,000 killed, wounded or missing). It is frequently cited as the turning point of the war when Union Major General Georges Meade’s Army of the Potomac defeated General Robert E. Lee’s Army of Northern Virginia, ending Lee’s invasion of the North. Lee believed that by winning a victory in the North Lincoln might then seek peace. Day one was a victory for the Confederacy; day two went to the Union. On the third day of battle, July 3rd, General George Pickett’s Charge was repulsed by Union rifle and artillery fire and General Lee retreated back to Virginia. The war did last two more years with 600,000 deaths and over 3 million casualties on both sides but the Confederacy never recovered from the losses of Gettysburg. Remarkably, only one Gettysburg citizen was killed during the battle. On November 19th, 1863, President Lincoln dedicated the Gettysburg National Cemetery and gave his historic two-minute Gettysburg address, “Four Score and seven years ago.”

Every year nearly two million people (2.9 million visit Historic Gettysburg) visit the 5,733-acre Gettysburg National Military Park, which is the largest battlefield shrine in America with over 1,000 monuments, cannons and 40 miles of trails. I started my visit at the Gettysburg Museum & Visitors Center where I watched the film, “A New Birth of Freedom,” followed by a viewing of the Cyclorama Painting recreation of the battle, featuring Pickett’s Charge. After looking through the museum I was ready for a drive through The Gettysburg National Military Park with my licensed Battlefield guide. They are the oldest guide service in the US, and he really knew his stuff.

The town was filled with re-enactors dressed as Union or Confederate soldiers and their ladies. This was all in preparation for the Remembrance Day Parade and Ceremonies. I spoke to Fife & Drum corps from Georgia; grandparents with their children and grandchildren from Virginia, Florida, Kentucky, Illinois and as far away as California. My host from the Gettysburg Convention & Visitors Bureau took me on a whirlwind tour of Historic Gettysburg including stops at the Lincoln Train Station Museum where one can ride the train with President Lincoln as he traveled to Gettysburg. The American Civil War Museum has 35 Dioramas with life-sized wax figures and a digitally enhanced Battle of Gettysburg recreation. We stopped in at General Lee’s Headquarters which is now a small Civil War Museum. The Shriver House Museum tells the story of the Confederate occupation of Gettysburg. The US Christian Commission Museum told the story of the care and faith this organization provided for soldiers in the battle. It is the only one of its kind.

There are organized walking tours of downtown and all the historic sites that last about 90 minutes and leave from the Gettysburg Hotel. But having my own private guide made it so much easier to get in and out of places at our own pace. I wish I had had time for a performance at the magnificent Majestic Performing Arts Center, but the parade was about to start. We were allowed to sit on the porch at Rupp House, which is a private organization of the Friends of Gettysburg. The parade ran almost two hours and the weather was cold and windy.

The Eisenhower National Historic Site was the home and farm of President & Mrs. Dwight David Eisenhower. It is located adjacent to the Gettysburg Battlefield and can only be reached by shuttle bus from the Visitors Center. It is worth the effort. Right after sunset we were off to the Illumination at Soldiers’ National Cemetery. With hundreds of volunteers all 3,500 graves had an American flag and a candle next to it. On a signal all the candles were lit and left that way for several hours. What a sight! It was even colder and windier, and I was ready to find someplace warm.

I stayed both nights at the Eisenhower Hotel and Conference Center, which is adjacent to the Allstar Events Complex featuring Go-Karts, miniature golf and indoor soccer. A great place to stay during the summer with your kids. We ate at several restaurants including Garibaldi’s in the new Gateway Center complex of movie theater’s, shopping and restaurants. There is also the Farnsworth House which is on the Register of Historic Places. You can still see 100 bullet holes from the battle at this historic inn. The Dobbin House is the oldest building in town dating from 1776.

There are many other events one can visit Gettysburg such as the Living History Encampments, Civil War Heritage Days, Civil War Battle Reenactment, Eisenhower World War II Weekend and the Autumn Civil War Show. Maybe after reading my story they will invite me back when the weather is a bit warmer!