Did you know bourbon is the only true American spirit? The enterprising early American settlers, taking advantage of the fields of corn surrounding their cabins, discovered they could use corn to brew whiskey. Today bourbon must be made with a minimum of 51 percent of corn and aged at least two years in white oak barrels that have been charred.

Charring is produced by setting fire to the barrel interior, the process lasting for less than one minute creates a layer of charred wood. The charring in the barrel gives the liquid its rich amber color as it ages. In keeping with modern marketing techniques the Kentucky Distiller’s Association in 1999 formed the Kentucky Bourbon Trail after observing tourism and marketing opportunities in California’s wine country and Scotland’s Whisky trails. Today the Kentucky Bourbon Trail has become a fast-growing tourism attraction, drawing visitors from all 50 states and many countries. As an interesting aside: Kentucky produces ninety-five percent of all bourbon.

Eight of Kentucky’s signature distilleries make up the Trail: Buffalo Trace, Frankfurt; Four Roses, Lawrenceburg; Heaven Hill, Bardstown; Historic Tom Moore, Bardstown; Jim Beam, Clermont; Maker’s Mark, Loretto; Wild Turkey, Lawrenceburg and Woodford Reserve, Versailles. Getting right to the point—if you are going to visit Kentucky you simply must be introduced to their elixir-of-life, good ol’ Kentucky bourbon. The best method of learning about the actual production of bourbon and forming a real appreciation of the drink should not be missed. How you ask? By all means take a distillery tour!

I toured the award winning Buffalo Trace Distillery and was fortunate to have Elizabeth Shraberg and Freddie Johnson as my guides. Tours are given Monday through Friday on the hour from 9 a.m. to 3 p.m.—Saturdays from 10 a.m. to 2 p.m. Additionally, a “Hard-Hat Tour” is given to adults only and includes an insiders view of the entire distilling process.

Before your tour slip into your comfortable shoes and prepare for hundreds of footsteps around the property as you witness a first-hand view of row upon row of pipes and large copper and steel tanks; this along with the aroma of grain and yeast make for an interesting adventure. One of the most amazing parts of the tour is walking into the warehouses where hundreds of barrels of this precious brew sit in solitary splendor quietly aging and awaiting their debut. Your tour guide will make it a spirited trip while sharing fascinating historical points with you along with a keen insight into today’s bourbon industry.

You will have an opportunity to view the workers at their appointed tasks, many of whom are second and third generation employees. They are passionate about their individual jobs and take a great deal of pride in knowing each task is essential in producing their favorite quality product—Kentucky bourbon. Before you leave be sure to visit the gift shop where all sorts of Buffalo Trace gift items are offered for sale along with various selections of Buffalo Trace Bourbon. Bring your check book; you simply cannot go home without something to mark this excursion! The distillery is located about 27 miles northwest of Lexington, Kentucky. For further information call: (502) 223-7641 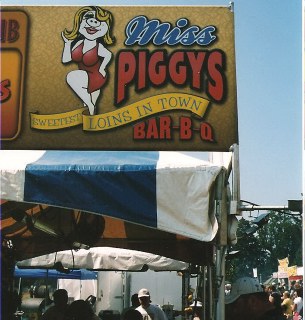 In September people by the thousands flock to the distillery area to experience a five-day event called the Kentucky Bourbon Festival. With Southern hospitality at its zenith the event was held in Bardstown, Kentucky, this year. I attended the festivities … great entertainment, historical tours, along with a grand assortment of booths displaying local foods and crafts were offered.
As I walked onto the festival grounds, a musician stepped up on a stage and picked up a microphone. With the aid of a drummer (connected electronically to a big booming sound system) he flung himself into a song by shouting: “LORD! HAVE! MERCY!” As my ear drums reverberated in shock I held my hands over my ears and shouted, “AAAMEN!” Talk about starting off with a bang, this man had a handle on getting attention. Entertainment for children enjoyed a brisk business. Rides on a little choo-choo train looked like fun, but my favorite was a strange air-filled contraption called “Excalibur” where little kiddies were directed to crawl up a ramp and upon arriving at the top were supposed to sit and slide down. However, I observed that when the three and four year old rebels arrived at the top they simply began to laugh, jump up and down and wave their little arms in the sheer delight of their freedom. Mothers stood at the bottom shouting, “COME DOWN THIS INSTANT!” No response from the fun seekers.

As the day wore on I left the festival area and walked a few blocks to downtown Bardstown. It is a peaceful small community filled with a mid-century ambience where mothers, fathers, grand parents with an abundance of dogs strolled along the sidewalks all while pushing babies
in strollers. The very essence of all that is good in America. Since my time was limited, I entered only one store, “Spalding & Son’s. The store—the same family in the same location—has enjoyed
a thriving business for the past 150 years.

Several stories were shared with me while I visited, my favorite being the following: as the Civil War raged across the country the Yankees marched into Bardstown and appropriated goods, food and animals that would have been used for the Confederate Army. Grandfather Spalding, a strong man dedicated to his family and property, realized his means of transportation was at risk. Under cover of darkness he silently brought his favorite white horse into the store, and with grim determination guided him down the steps into the basement where the horse resided in comfort until the Yankee soldiers left town. Visualize that!

My day concluded in a whirl of activity with the excitement of the seventeenth annual black-tie extravaganza: the “Great Kentucky Bourbon Tasting and Gala.” An elegant evening ensued with gentlemen dressed in spiffy tuxedos along with ladies strolling about in their most fashionable gowns all created an air of excitement. The press, equipped with cameras, were evident, mingling with the crowd while looking for a good photo op and a quick interview. This signature event of the Kentucky Bourbon Festival began with the sampling of the finest Kentucky Bourbons from the area distilleries. As I interviewed dignitaries, I was pleased to meet Jimmy Russell, master distiller of the Wild Turkey Distillery. At his suggestion I sampled Wild Turkey Bourbon and found it has a smooth, honey sweet taste … a mellow drink. Russell has worked in the distillery since 1954. He smiled as he mentioned Wild Turkey Distillery has expanded its distribution to include Australia, China and Russia in the last several years and is currently working on a thirty-eight million dollar expansion.

When the tasting concluded 1,200 guests were admitted into an elaborate dinning area where a delightful Kentucky buffet was served. The dinner entrée was intriguing since it followed the theme of the evening and was billed as: “Bourbon Basted, Grilled Filet of Tenderloin with Bourbon Peppercorn Sauce.” A small musical group played while dancers stepped out on the floor to dip, turn and twirl to their favorite tunes. All in all it was bodacious bourbon evening enjoyed by all. For reservations and tickets for next year call: 800-638-4877.

If you are in Kentucky next September you might wish to attend the Culinary Art Bourbon Style Cooking School. A talented chef prepares tasty menu items, followed by a short discussion and food service to the guests. The dessert this year was a bonus: “Bread Pudding with Jim Beam White Label Bourbon Hard Sauce.” (Bourbon, bourbon everywhere!) If you are looking for comfortable accommodations with well trained employees consider the Homewood Suites by Hilton in Lexington, Kentucky. The old adage: “home away from home” holds true there since the rooms are stylish with a nicely equipped small kitchen. To top the attraction, a complimentary hot breakfast is served daily along with a light dinner Monday through Thursday. A talented cook, Catherine Martin, keeps the meals simple but tasty. Hotel guests dine in an attractive dining & kitchen area surrounded by bright Southwestern colors. Good simple food served in a bright sunny décor. Who could ask for more? For information: 1-859-223-0880.

Regarding Kentucky: I can’t wait to return!