Two weeks in Florence, Italy. What a luxury! Instead of whizzing through the Uffizi, the Duomo, the marketplaces and piazzas, there would be time to savor this city of the Renaissance. The luxury came about because my friend, Sue, had found an apartment to rent. Soon five of us were ready to roll into the roomy, three-bedroom/two bath, kitchen/dining room space — a bargain compared to hotel rates.

Caught up in the Slow Food idea that started in Italy, we made “go slow” our theme: tour museums and churches, slowly; sit down and savor food; stroll narrow streets between tall, centuries-old buildings; sit a spell in an outdoor caffe; people-watch.

The apartment building opened onto the Piazza Ciompi along Via Pietrapiana with shops and wine bars and restaurants packed into a few blocks. We soon found streets that led directly to squares and churches and museums from the 14th and 15th century with glorious paintings, statues and tombs of Florentines like Dante and Michelangelo.

We traveled in early November, wondering if we should have chosen October for better weather, but jobs and commitments intervened. The weather was pleasant, although jacket and scarf weather. We bought scarves for more than the weather – to also look like the fashionable Italian women with their Made-in-Italy long knit scarves. Each week brought sporadic rain and drizzle, but only one day of heavy rain.

The first few days we ran a bit faster than planned, taking two out-of-town day-trips and two Florence walking trips. Elana, our master organizer, had researched tours with contacts in Italy and everyone voted for a day in Tuscany’s wine region. We decided on the Montalcino area via an arranged van tour. For the second trip, we rode the train to Siena, the biggest medieval city in the world.

Elana, a Slow Food devotee, brought The Food Lover’s Guide to Florence. We used its restaurant recommendations and agreed to a two-hour food tour with the author, Emily Wise Miller. Another day we did a two-hour Dante Walking Tour to tuck in some literature.

Emily’s food tour began at the Mercato Centrale (Central Market), the nineteenth century building that simulates an expansive train station. We sampled for two hours . . . wonderful cheeses like pecorino, a sheep cheese from Tuscany which we enhanced with fig jam. Travelers can bring cheese into the U.S. if shrink-wrapped. Some of us bought balsamic vinegar. It ranges from just-made to aged-in-oak for 25 years, like fine wine.

Upstairs in the huge “station” we viewed fresh produce. Signs were posted on displays and with prompting, we could read the Italian: Don’t squeeze. Don’t touch. After more wanderings in the Mercato, past truffles and fish and horsemeat, with stops for cappuchino and expresso coffee, we went on to lunch across the square at Pepo on Via Rosina for tagliatelle al ragu and creamy panna cotta.

Since we are writers, we felt a Florentine writer should be included, so we picked a two-hour Dante walking tour, led by an artist/literature teacher named Sean. With that came a short talk about Dante’s book, The Divine Comedy, particularly The Inferno, over coffee and pastry in Gilly’s restaurant at the edge of Piazza de La Repubblica. We then walked across town, past Dante’s house and hang-outs and ended the afternoon with more food and wine.

After several days, we slowed the pace to enjoy restored palazzos and art museums and churches with magnificent art portraying the Christian message. Each day we made time for a relaxed (slow) three-course lunch with a bit of wine, and a mid-afternoon latte or “American” coffee (watered down expresso). For dinners, we consulted Emily’s fail-safe restaurant guide. One evening we had a “home-cooked” dinner with Mercato purchases, including porcini mushrooms, parmesano-reggiano cheese and fresh pasta that we watched being made.

A DAY IN TUSCANY

Our two-hour van ride from Florence to Montalcino took us past green fields, rolling hills and tall cypress trees lined along the top. We reached Montalcino, 1800-foot elevation, and drove down into a valley to San Polino Winery and vineyard. There, we toured and tasted one of Italy’s top red wines, Brunello of Montalcino, a Sangiovese varietal. It’s designated a D.O.C.G wine, controlled by government edict all the way from vineyard pruning to its 5 years of aging.
Back in the van, we moved on to an olive grove for an Italian lunch equal to a dinner, in an olive press room. Full of food and still sipping wine, we learned about olive oil from the pressing of olives to the oil’s enemies: light, oxygen and temperature. A drive to the top of the town ended our day at La Fortezza, a 14th-century fort with a modern wine bar (enoteca). Some of us climbed stairs to the ramparts, outside, for a back-in-time sense and a marvelous panoramic view of the valleys spread out below.

Still so much to see – slowly, we vowed. Walking and more walking set the pace, but occasionally a cab took us home. We investigated chapels and towers, and marketplaces to buy shameful touristy stuff like Michelangelo’s very bare David on an apron. We did a walk through Santa Croce Basilica with its big-name tombs and frescos, and then wandered through the connected monastery to the Leather School. Students tool leather here. There’s also a shop, one of many leather shops in Florence.

On the last day our gang was down to two — Elana and me. We waved Sue off in the early morning (the others left for jobs a few days before), and went off alone to do last minute catch-up. I thought, “Slow day, no hurry,” and began my wanderings in the misty rain, staying dry along narrow passageways sheltered by four story buildings. 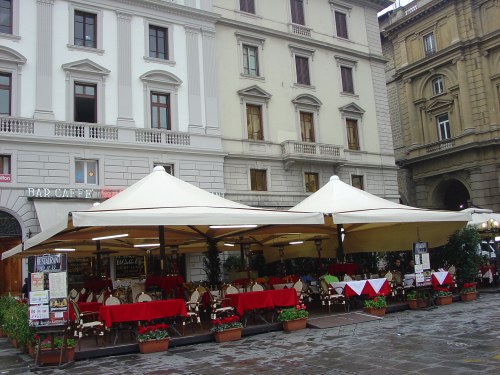 I headed for the Piazza della Repubblica, for old and new memories. The city’s triumphal arch, in the spot of the original Roman forum, celebrates the 1860’s unification of Italy. The old-world Hotel Pendini by the arch brought memories of my trip to Florence a decade ago. On this trip I added piazza memories of the glorious music of a soprano and an accordionist from Romania. Nightly, they sent their melodic music out across the square, compelling us to stop to listen as we walked through.

I crossed the square and headed for an old church a block away, Orsanmichele. Outside, niches hold bronze and marble statues by masters such as Donatello and Ghiberti as well as decorations by Della Robbia. This magnificent old ornate church had been a granary in the 13th century and evolved into a church-sharing storage room in the 14th and 15th centuries. Magnificent altars, painted ceiling arches and stained glass windows pulled me to a pew to sit and take it all in. I dropped into the one-of-many caffe bars for lunch — a warm panino and a glass of Pinot Grigio. Doors were wide open onto the sidewalk with counters for food choices along its other three sides. I hurried a little more than I intended because I wanted to walk beside the Arno River on both sides by crossing two of its bridges – Santa Trinita and the famous Ponte Vecchio.

The serene Arno River repeats the views alongside it in its mirror-like surface: the old buildings and towers with their colors of brick-orange and blue and gray façades, the three arches of each bridge. I looked up-river and down-river, and then walked to the Uffizzi art museum, past the Palazzo Vecchio and out into its square. There, I clicked pictures of dozens of people clicking pictures in front of buildings and statues. 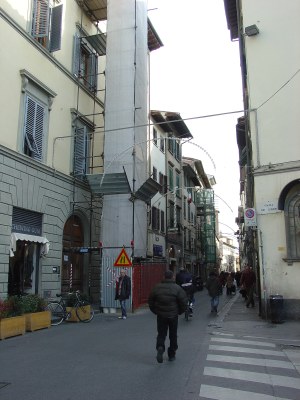 And then it was time to meet Elana, so I walked past the squares and buildings that now looked familiar to me. I felt I had become a part of Florence. We walked to a restaurant recommended by Italian residents, La Vin dell Acqua. Wow. Try the linguine with lobster that has superb flavorful sauce. We also had mista, a green salad, Valdadice wine, a crisp and flavorful Pinot Grigio, and creamy tiramisu for dessert. All that wonderful food took three hours to eat. The bill was 90 Euros — $135.

The next morning the trip was over. I took a cab to the airport, Elana took the train to Rome. Of course, everyone is ready to go to Florence again. Maybe spend one of the weeks in a villa in Tuscany?