“Seeing” is the oversimplified verb used to describe traveling to, eating, sleeping, walking, viewing and experiencing a place. You might hear a lusty traveler, replete with camera bag, water bottle, hat, sunglasses and guidebook, declare “I’m off to see Venice” or “I’m off to see Mozambique.” “Seeing” can be done quickly, but shoddily. A careful plan and a little spontaneity can work greater wonders.

I had a problem in January 2009. I had resolved to “see” Seoul, South Korea, during Seolnar, the Korean New Year. I had a five-day weekend at my disposal, but I was at the opposite end of the country—Geoje Island, just off the southern coast near Pusan. Adam, Elaine, and Jeff (three fellow expatriates) and I realized that getting there and back would occupy the better part of two days. That left us a scant three or so to “see” Seoul, a city of over ten million people and 600 square miles. This is how it fell out.

After a three-hour ride on the surprisingly slow KTX (the Korean bullet train), I found myself standing in at the top of the steps at Cheongdam station, getting my first look at Jamsil, Seoul, in the chilly January breeze. It struck me favorably. The gleaming edifices of high-rise apartments and Nestlé’s Korean headquarters reflected sunlight muted by thin gray clouds. The six-lane avenues were largely deserted in reflection of the holiday. I breathed in a lungful of crisp air, readjusted by camera bag, and went in search of accommodation. Described in the guidebook as being “like an old pickup truck…not pretty, but it gets the job done,” the Tiffany Hotel was just a few notches above being one of the hundreds of sleazy “love motels” that dot major Korean cities. The interior was somewhat shabby and I had to shell out a deposit, but the room itself was clean and bright, and I didn’t complain about paying 20,000 won more than that guidebook said I’d have to pay.

I dumped my stuff off and sallied back into the windy winter’s evening to hit the first stop on my “see” list: COEX Mall, supposedly the largest subterranean mall in Asia, and a Korean landmark. It was a quick walk over the hill. After a little difficulty finding the entrance (also subterranean) I entered and spent the next five hours roaming the labyrinthine hallways of this massive place. COEX might not be the biggest, but if it isn’t, it’s certainly a contender. There are enough curio shops, clothing stores, and restaurants to keep a generation of mall rats happy for years. In addition to the usual stores, COEX also sports: a duty-free shop (disappointingly filled with designer handbags, shoes, and perfumes); an arcade; an enormous bookstore (Bandi & Luni’s, where legions of studious Koreans were sitting and poring over volumes in both English and Korean); and an aquarium. I saw it all. The aquarium was impressive and included several animals I wouldn’t have thought they’d allow into a shopping mall: penguins, seals, and sharks. Unable to resist the nostalgic allure of the video arcade I got 2,000 won in change and spent a few minutes lassoing African animals, as the line waiting for House of the Dead 4 was prohibitively long. I dined at Uno Pizzeria and Chicago Grill, where only the name was strange. I had pepper steak, a baked potato, broccoli cheese soup, breadsticks, and a Coke. It was a little taste of home I hadn’t had in seven months. 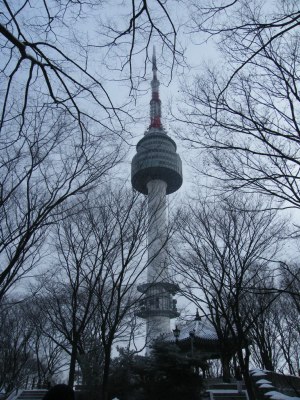 The following day we were slated to meet up at Namsan Mountain in the center of Seoul. I rose early, caught the subway to Myeongdong and managed to link up with Jeff and his friend Bryan. We had to wait a little while for Adam and Elaine, who had quite understandably been out partying hearty the night before in shakin’ Sinchon (the university district, where all the bars are) and who had woken up a little late. We took a cab up the mountain to the cable car station and rode in a little glass box with 30 other passengers the rest of the way. I nabbed a spot in the front left corner and was treated to a fine view: Seoul under the winter sun and Namsan mountain’s rugged contours in a gossamer gown of powdery snow. The meal at N’Grill, the rotating restaurant which sits atop N’Seoul Tower at the summit of Namsan, was small but tasty. Disappointingly, we were there two hours and rotated through only 270 degrees of the compass.
That night we rode the train back to Sinchon for the best wild night Seoul could offer us. After a few bars and a couple of dives we found ourselves blind drunk in a noraebang, or “singing room,” the Korean take on karaoke. You’re given a private room, a television screen, low lights, as much booze as you can drink and a few tambourines and are allowed to belt out as many songs as lustily as you want. The night ended with Bryan on the couch in a swoon, me reaching for my beer and missing by a few inches, and Jeff videotaping Elaine’s ever-more-heartfelt crooning.

The next morning, my head feeling like it was about to split open, I took a hot shower, ate a hearty breakfast (uh, brunch) at the Sizzler steakhouse across the street, and then walked down to the Han River, feeling somewhat better. It was my intention to rent a bicycle and pedal along the riverside and take some pictures. Here I met my first snag—the bicycle vendor was closed up for Seolnar. Only slightly disappointed, I enjoyed the rest of my unexpected stroll around the riverfront and across the Yongdong Bridge, eyeing the half-frozen river. I snapped a few pictures of Ttukseom Park and the Ttukseom ferry station, which resembles a vast, alien space station constructed mistakenly on an Earthling riverbank, with eldritch domes, protuberances and once-vibrant colors.

That evening, the last evening in Seoul, I waited until I could see the golden sunshine peeping in my window before grabbing my coat and heading down to the subway station. I boarded the train at Cheongdam and rode two stops east to Olympic Park, emerging from the subway station just as the evening sun’s radiance was taking the park full in the face. The staircase tilted up quite sharply and opened out, making me believe I was about to step off into the brilliant blue sky…but then the impressive façade of Olympic Park reared into view, and the World Peace Gate spread its angular wings to greet me. It was something to behold. Under the gate an eternal flame burns near an inscription, a memorial in six languages to the 1988 Summer Olympics held there. Behind it lies an ice-skating rink (doing good business at this hour), a hill with a half-excavated fortress from the Imjin War, another memorial with flags of all the competing nations arranged in concentric semicircles overlooking the river, and the Olympic Museum (also shut for Seolnar). I took a few pictures, observing loving couples pedaling around on side-by-side double bicycles (insulated from the cold by plastic sheets). I got a gigantic oatmeal cookie with raisin-paste filling at a nearby bakery and went back to the subway in the dying twilight.

On the final morning, I packed and checked out, and with several hours and a little whimsy to spare, I went to see Bongeunsa, a Buddhist temple indicated on my map a stone’s throw from my hotel. In the soft midmorning light and semi-quiet of Seoul’s family fun district, it was sublime. I bowed to the four Buddhist icons at the gate (as I’d seen the other visitors, reverent Koreans, doing) and strolled through the temple grounds as humbly and respectfully as I knew how. Inside the main temple I observed prayers; people were bowing, lighting candles, and moving enormous floor mats to and fro between the floor and the great piles of them at the sides of the room, watched over by a multicolored, ornately-carved ceiling from which cubes and blocks protruded at geometric angles, and nearly life-size dragons perched on rafters and peered down at the supplicants. Outdoors, I saw other pilgrims meditating in front of a huge 50-foot statue of the Enlightened One on a polished marble platform untouchable by shod feet. On the way out I saw one young woman snapping pictures. That is the generation gap in Korea: either you pray or you take pictures.

Thence it was but a short subway ride, a leisurely wait in Seoul Station, another disappointingly long three-hour jaunt aboard the KTX, and a bus ride from Pusan back to our little town of Gohyeon. As I suspected, though I’d seen and done a lot, I’d only just begun to “see” Seoul. This energetic, Westernized, user-friendly city requires months and even years to “see.” Three days dropped the first tantalizing hints. The full meal lies beneath. It only remains to begin.