Friends have said to us, “You are going to Thailand – again?” We reply, “We have been there a dozen times and there is always something wonderful to do.” This trip was no exception.
Any reason is a good reason to visit Bangkok. My husband and I are frequent travelers in Asia and we make sure that Bangkok is on the itinerary. Some of our trips are long – some are as long as three months. During our three-month trips, John and I plan mini-vacations – our R&R time. On our most recent Asian trip we decided to treat ourselves to a stay at one of the world’s most famous hotels, The Peninsula Bangkok. We walked taller when we exited the new Bangkok airport and saw the sign for the Peninsula and knew it is for us. Nothing so plebian as the guest’s name on the sign board! A slight nod and the tuxedo-clan sign holder quietly acknowledged, “Mr. and Mrs. Scott. Welcome to Bangkok. Your car is waiting.” Shortly the black Mercedes pulls up. “Here is a chilled bottle of water and today’s paper. Relax and enjoy the 40-minute ride.” And we do. My husband whispers, “Let the relaxation begin!” It is like returning to an old friend as we marvel at things that are uniquely Bangkok – the mystical figures gracing the flower-clad roadway, the bright pink taxis, the Chao Phraya River, and other familiar sights.

We barely noticed the call the driver made alerting the staff of our arrival assuring that they were out front to greet us. Everyone needs to feel special and important – and at the Peninsula Hotels everyone does. The award-wining hotel is so tech sophisticated that there are buttons for everything from closing the drapes to dimming the lights. The bathtub has a built-in TV and a valet button. I wonder, “Why does one call for the valet when in the bathtub?” There is a small box near the closet that can be accessed from the hall. Shoes placed in the box at night are returned shined in the morning. When the red light is on it means the box contains a message or the newspaper. Very cool!

Besides being an amazing hotel the Peninsula has the three most important aspects of any property – location, location, location. The hotel is located on one of our favorite rivers, the Chao Phraya. All the Peninsula rooms have a river view. Watching the Chao Phraya is as mesmerizing as watching a campfire. It is a vital river with tiny tugboats pulling barges up and down the river. Long-tail boats zip along reminding us of a James Bond movie. Ferryboat attendants whistle their arrival at a dock. Thai-style boats from the Oriental and Peninsula Hotels crisscross the river. In the evening the lights of the city are reflected in the river, plus the brightly-lit dinner boats add a festive look. We started each day with a long leisurely breakfast at the water’s edge and ended the day lounging in a sala by the pool with the river always in view. 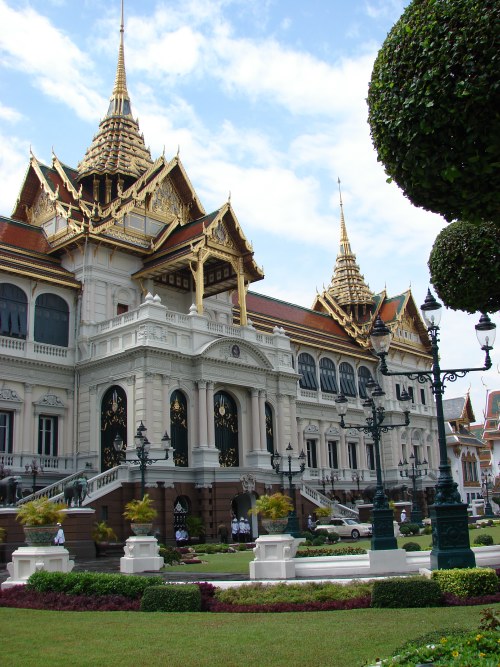 We have transited through Bangkok many times, and there is always something to do. This time there were many colorful signs wishing the Thai monarch, King Bhumibol Adulyadej a happy 80th birthday, so we felt a visit to the Grand Palace was appropriate. He has been king for 61 years making him the world’s longest serving monarch. He is much loved by his people for creating royal projects including tree-planting programs to protect the environment long before it was popular to do so.

The expansive grounds of the Grand Palace are awash with golden temples and glittering mosaics. The most revered temple in Thailand is the one that houses the Emerald Buddha. The small Buddha is actually made of jade and has a fascinating history of being captured and recovered, then lost and found. According to reliable chronicles, lightning struck a chedi in Chiang Rai, Northern Thailand, in 1434 chipping the stucco off the Buddha image. The abbot of the temple noticed a green color showing through. He removed the stucco covering and found the Emerald Buddha. And that is only part of the amazing story of the Buddha. The last time it returned to Bangkok was when a rainstorm washed away the plaster that had kept it hidden for a century.

We have so much to learn about other countries’ religions and cultures. I am always embarrassed by our ignorance of Thai culture and the Buddhist religion. We try to learn a little more each time we visit. Within the palace grounds are scenes from Ramakian, the Thai version of the Hindu epic, Ramayana. The scenes depict the Thai creation story. I liken our learning to the beautiful and intricate mosaics that decorate the buildings and statues. Each time we visit Bangkok we learn a few more pieces of their colorful history. Maybe someday we will have the whole picture. Regardless, I appreciate the beauty and intricacy of the temples and find the impressive statues of the mythical guardians especially intriguing. 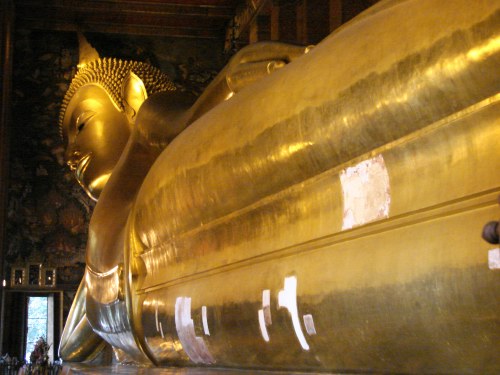 One of my favorite places in Bangkok is the Wat Pho, Temple of the Reclining Buddha. Each visit reveals a new level of understanding. We always marvel at the size of the reclining Buddha, which is 151 feet long and 49 feet high. “And to think it isn’t even the largest in Thailand!” I tell John, but he is busy getting change so he can make his merit offerings in the 108 bronze bowls. On this trip I was surprised to learn that Wat Pho is considered Thailand’s first public university. The murals spread throughout the temple complex explain a wide variety of topics from geography to science to religion. It is famed as the birthplace of Thai Massage.

“Welcome back, Mr. and Mrs. Scott.” How do they do that? How can the Peninsula staff remember everyone’s name? One of the staff asked, “Have you seen our new spa? It is only one year old and quite beautiful.” A Thai massage seemed like just the thing after visiting the birthplace of Thai massage. There are spas and there are spas but there is only one Peninsula Bangkok ESPA. It was like entering another dimension. The music whispered, and the candles flickered as we were shown to our private salon with a Jacuzzi, steam bath, reclining lounges, and herbal tea. After tea and enjoying the Jacuzzi, our therapists arrived and we relaxed totally. As if we were not relaxed enough, after the treatment, we went to the relaxation room, put on headphones, listened to the music, gazed out over the pool to the river, and watched nighttime arrive.

At dinner in the Thai-style Thiptara Restaurant, we listened to traditional Thai music and enjoyed the river scene. I savored the Thai spicy soup with prawns and lemon grass while John delved into the green mango salad with grilled prawns. “I wish we could stay forever.” John reminded me, “If we don’t go we can’t come back.” Hum, I guess that makes sense.

We drove about one hour from Bangkok to the ancient capital of Ayutthaya and boarded a rice boat on the Chao Phraya River. Boats are no longer used to transport rice, so some of the teak boats have been converted into restaurants and a few into houseboats. Our boat could accommodate 12 passengers; however, we were lucky because there were two other guests along with our two guides, a cook, and the boat’s pilot. Interestingly, the other couple only lived 200 miles from us.

We traveled the river for two days and one night stopping along the way to visit small villages sometimes by bicycles, which are provided, sometimes by walking. We slept in the lower portion of the boat where the sleeping area was divided by curtains. There were two bathrooms and one shower. The main deck had ample sitting area and a small upper deck had a few chairs.

Many people still grow rice, but during the time when they are not busy in the fields some families have created small businesses to make extra money. Everyone in the family works together. We visited families that make bricks, drums, incense sticks, and charcoal. Especially interesting was learning how they grow mushrooms. They are so successful that expansion is planned. Regardless of the product, each process was so much more complicated than we thought. Mainly the families make things that can be used by people in their community. 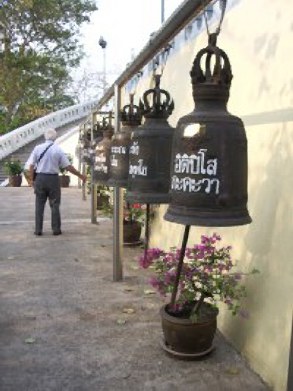 Buddhism is the main religion in Thailand and our houseboat usually tied up by a Buddhist temple, which is the center of the community. Buddhist monks live a very simple life without any personal belongings so the people of the community give them what they need including food. One morning we got up before the sun and with food our cook had prepared waited for the monks to walk by so we could give them the food. The monks in Thailand wear saffron colored robes, sandals, and shave their heads. We had a bowl with rice, and the cook had put a soup-like mixture that contained chicken and vegetables in small plastic bags. In a show of respect for the monks we took off our shoes, bowed our head, then divided the food between the four monks. After the food was distributed the monks thanked us by chanting a blessing and went on their way. Buddhists believe that if you do good then good will come back to you. If you do bad, then bad will come back to you.

One day we visited an orphanage with 1400 children. It was dinner time so one group at a time chanted a prayer of thanks and then got in line for their dinner of rice and a mixture of vegetables. We saw many boy scouts helping to distribute the food. We also visited a school. The children were so excited to see us. They all wanted to have their picture taken with us. Before we entered the classroom we took off our shoes. Thai people do not usually wear their shoes inside their homes, temples, or schools. Surprisingly the students knew how to say many words in English, including how to count.

When our houseboat was traveling down the river toward Bangkok, we relaxed, waved to people on the shore, and watched the activity along the river. People were fishing, watering their crops, and just relaxing by the river. The barges were especially interesting because families live on little houses on the barges. They were cooking meals, doing laundry and other daily chores. We saw the barges being loaded with sand. Now we know where the barges come from. It was an amazing trip that was over way too soon. 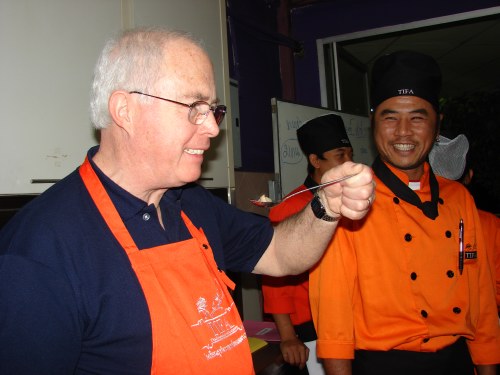 Thai food is popular the world over, so we decided a cooking lesson was in order. Just mention the name “Yingsak” and everyone breaks into smiles. Flamboyant Chef Yingsak is the most popular chef in Thailand with his own TV show and cooking school. My husband and I joined one of his classes for the morning. We were given a booklet with the recipes for the items we were going to make then watched a video on how to prepare them: Miang Kwuay Tiao (rice noodle packets), Kaeng Keow Wan Sai Kok (green curry with sausage) and Kaeng Liang Pak Ruam (clear spicy soup with vegetables). Chef Hoon went over the instructions verbally adding more tips. Luckily there were students with an excellent command of the English language to help us when we needed translations. Then we all went to the kitchen where working as a team we helped to prepared various parts of the food – chopping, slicing, stir frying, and so on. It was an incredibly smooth team effort that ended with tasting everything.