Let’s start with my impression of Branson before I arrived and compare it with my thoughts after spending 5 days there. Over 8 million visitors a year come to town, and over 100 million live within a day’s drive, though that is about to change; almost everyone drove as the then nearest (Springfield/Branson) airport is in Springfield Missouri, an hour’s drive. I was invited to Branson for the opening of their new airport located 15 minutes from downtown Branson. This airport is privately owned, and it is thought to be the largest privately owned commercial airport in the United States. Its construction involved flattening the tops of a series of Ozark Mountains. The city is in the southwest corner of the state, and not many people would visit except for the 50 theatres and 130 shows, though I am getting ahead of myself. First we’ll explore a bit of history first.

In the 1880’s Marvel Cave was opened, and in 1907 Minister Harold Bell Wright wrote The Shepherd of the Hills about the Ozark Mountains and their people. He was the first American author to sell 1 million books. The opening of the hydroelectric Powersite Dam in 1913 along the White River created Lake Taneycomo (Taney County Missouri). It was too cold for swimming but great for trout. In 1950 Hugo Herschend leased the Marvel Cave, and his widow and sons took over upon his death in 1955. The cave has been designated a National Natural Landmark. In 1960 they opened Silver Dollar City on the site of the cave. The park is an 1880’s themed experience that fits Branson’s vision as a family-friendly vacation destination with down-home charm. The U.S. Army Corps of Engineers completed Table Rock Dam on the White River in 1958, drawing many vacationers to the newly created Table Rock Lake. In 1959 the Mabe Family created the Ozark’s Jubilee Music Show that became the Baldknobbers and was the first show in town. The Presley family became the first to move their show to Highway 76 in 1967 (which would become known as the “strip”). In 1983, Roy Clark opened the Roy Clark Celebrity Theatre, becoming the first famous country music star to have his own venue in Branson. Many of the performers who have played in Branson got their start at that venue. In the 1980’s there were 16 shows and today there are 130. There are also 12 golf courses. 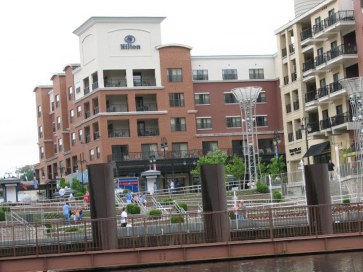 How many shows could I see in my 4 1/2 day stay? The kind folks at the Branson Lakes Area Chamber of Commerce and Convention & Visitors Bureau managed to get me to seven, added several non-theatre experiences, get me fed and put me up at the Hilton Promenade Hotel located at Branson Landing shopping center and overlooking Lake Taneycomo. Branson Landing (modeled after River Walk in San Antonio) is a $420 million public/private project with 450,000 square feet (85 acres) of waterfront shopping, dining and entertainment. The Water Fountain is synchronized to light, sound, music and fire. There are condos for rent and sale as well as a 1.5-mile boardwalk and marina. Directly across the street from my Hilton Promenade is the Hilton Branson Convention Center. My hosts arranged to pick me up, drop me off and pick me up after every experience. In chronological order here is how I spent my time in Branson:

I arrived at Springfield Missouri airport and was driven one hour to my hotel. There was no time to unpack because my first show Circle B Chuck wagon Theatre, included dinner and free popcorn. This was my only country & western experience as the audience watched Lone Ranger, Gene Autry and Roy Rogers movies to put us in the mood. The Horn family including father, mother, son, daughters and granddaughter as well as a few non-relatives, entertained us as the Riders of the Circle B in a very light-hearted cowboy music show. I had an hour before the #1 Hits of the ‘60’s show began. There were a lot of energetic young people who interacted with the audience. I was called on stage to dance with them; audience participation is one of the keys to all their shows. The performers meet with their audience at intermission and after the show, selling their CD’s, t-shirts, hats and books. This was one of my favorite shows although none of the performers were born until the 80’s.

There is a free shuttle between the shops at Branson Landing & Historic Downtown (not that long a walk but it is uphill). Everything in Branson seems to be uphill. Rather than spend $15 for breakfast at the hotel I spent $6 for 3 giant pancakes. I noticed the sky suddenly became VERY dark and the wind was really whipping up. The lady next to me said, “It’s just a tornado coming our way. ” WOW! I want to go look. Her reply: “You are from out of town- right. No one in Branson goes looking for a tornado!” Then it was time for the 10 AM World Famous Platters Show. Two of the members were Platter replacements. I walked to lunch at Montana Mikes, and it was the 2 PM ‘50’s At The Hop Show. I love 50’s music but this young cast seemed bored; not one of my favorite shows. I had rest time and spent an hour in the pool, whirlpool and exercise room. The hotel had free wireless in the lobby (why charge for it in your room?), and I caught up with all my messages. Dinner was at Dick Clark’s American Bandstand Grill Restaurant. Reasonably priced comfort food. Branson is not a haven for food & wine lovers. The prices are very reasonable for both the shows (average about $30) and restaurants. Wine is basically red, white & rose. The basement of the Dick Clark Theatre has the 1957 Car Museum, the world’s largest collection of 1957 cars and trucks. I loved it. The 8 PM Legends in Concert was upstairs & featured performers copying the style and looks of famous performers. They change several times a year. My show had a fabulous Blues Brothers & Rod Stewart. Tina Turner, Elvis & Alan Jackson were also good (I had to ask who Alan Jackson was).

A change of plans for the day as I was driven about 45 minutes to the afore-mentioned Silver Dollar City Theme Park with 30 attractions & rides. There are 60 craft shops and 40 shows daily, plus 12 family friendly restaurants. I finally saw people under 60 with lots of children. At every show and event there was a salute to US veterans of all wars. The American flag was raised at the opening of the park and the Pledge of Allegiance was recited. On this third day I loved the difference between big cities and rural America. After 3 hours I was ready to rest and chose to visit museums the rest of the day. Veterans Memorial Museum honored our veterans from WWI to Desert Storm. There is a bronze sculpture depicting a soldier from each of our 50 states. The Roy Rogers/Dale Evans Museum had Roy Rogers Jr. performing. The world’s largest Toy Museum holds the Harold Bell Wright Museum (the afore-mentioned author of The Shepherd of the Hills). 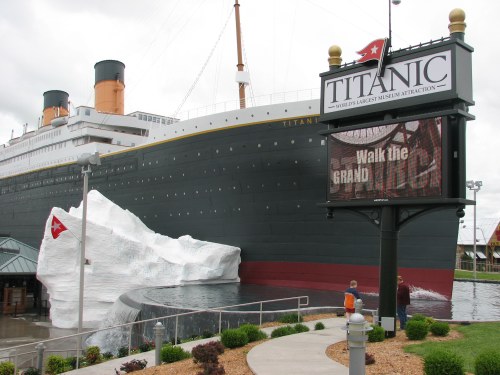 The 2-story Titanic Museum is a 1/2-scale replica of the ship. There are 400 artifacts, and one can actually touch an iceberg. Dinner that night was at the Osmonds’ Family Theatre where for an additional $10 one gets a 3 course meal. The Magnificent Variety Show features 7 decades of music and 300 (that is correct) costume changes. Led by Joe & Tamra Tinoco it also included their 4-year daughter and a young, energetic cast. This was another favorite of mine. As mentioned before, the cast talks to the audience during intermission and after the show. It makes everyone feel like family (are you reading this, Broadway?). 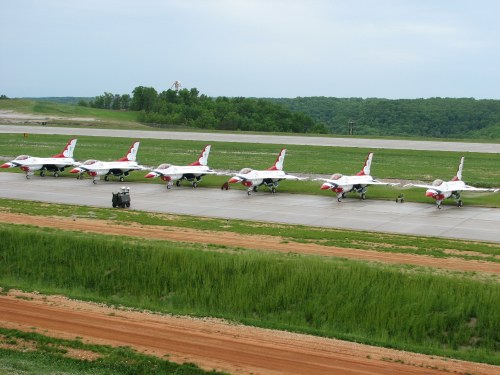 It was the second day of the Branson Air show. Although the droplets of rain were an inconvenience, the sun came out just as the US Army Golden Knights parachuted presenting the colors. There were vintage airplanes, aerobatic teams, a wing walk, pyrotechnics and finally the USAF Thunderbirds closed the show. Famous Dave’s BBQ was served in the VIP tent and was so filling I skipped dinner. I was given a tour of Branson and the surrounding area and drove by many of the shows that I could not get to visit. Andy Williams invested in Branson 50 years ago & still performs here many times. Other performers who either live in Branson or perform there a lot include: Yakov Smirnoff, the Russian comic, Tony Orlando, The Osmond’s, Mickey Gillies, Jim Stafford (20 years here), the Hughes Brothers who are the world’s largest performing family (5 brothers, wives and 25 kids). Noah The Musical is the largest grossing show in town and includes a 40-foot Ark. I was told that Daniel O’Donnell, the Irish singer, sells out his concerts a few minutes after they are announced. He might be the most popular unknown (?) singer in the world. I was driven to the Shepherd of the Hills Homestead and the highest point in Southwest Missouri, the Inspiration Tower. I wish I had the time to see the Branson Divas and Sons of the Pioneer show (75 years performing). My last show was my absolute favorite. At the Andy Williams Moon River Theatre I saw 1960’s legend Paul Revere & The Raiders. That is his real name (who knew). He is 71 years old with a full head of hair and is a really funny comedian. The band behind him also is part of the Bill Medley show that follows. After the Righteous Brothers’ were inducted into the Rock & Roll Hall of Fame in 2003 Bobby Hatfield passed away (they were not real brothers). I remember “You’ve Lost That Lovin’ Feelin” and “Unchained Melody.” Bill’s daughter performed 3 songs, one a duet.

I was off to the opening of the Branson Airport. Sun Country was the first flight to arrive from Minneapolis, and I was on the second: Air Tran from Atlanta, which then returned me to NYC. Lee Greenwood, who has had 20 country albums and is best known for “God Bless the USA,” performed for the Air Tran opening. More Famous Dave’s BBQ and I was on my way home. I had never considered going to Branson, but now I can’t wait to return (that is a hint, Branson!).