There are some real travel bargains available now. If you can take advantage of them, try Quebec City — this UNESCO-designated World Heritage site is a treasure. And getting there takes about the same time as a flight from San Francisco to New York. Quebec means “there where the river narrows.” Indeed, Quebec City sits atop the banks of the St. Lawrence River. French may be the official language, but English is spoken widely. A few months ago, I joined a gourmet cuisine tour to get inside access to some of the best this historic city has to offer.

Quebec City recently celebrated the 400th anniversary of its founding in 1608 by Samuel de Champlain. In its early years, there were many spirited contests on the Plains of Abraham (once a battlefield, now an expansive park) between the French and the British over who would ultimately control this gem. The city is divided into two parts — Vieux (old) Quebec (Upper Town) and Vieux Port (Lower Town). Visitors are either inside or outside of the stone walls; seven medieval gates are virtually the same today as when they were first constructed. In fact, Quebec City is the only fortified city in North America north of Mexico.

During my culinary excursion, my base was a former wharf and cannon battery known today as the Auberge Saint-Antoine. Located next to the St. Lawrence River, the Auberge’s restaurant used to be a maritime warehouse. During recent reconstruction of the property, archaeologists uncovered artifacts from the 1600s, which are now on display. The rooms have everything one would expect at a luxury boutique hotel — sumptuous bed, silky linens, high-tech access, heated bathroom floors, friendly service, and a knockout view of the river.

While it’s tempting to kick back and relax, keep moving, for there is a lot there to explore — starting with Panache, the hotel’s restaurant that has garnered rave reviews since its opening. The ambience is warm and casual as you sit amid stone walls and massive wood beams with the river right out the window. French Canadian cooking at Panache uses fresh ingredients, local purveyors and everything else a San Franciscan would expect. Start with the white coco bean (it has nothing to do with chocolate) cream soup that conceals a wild boar and truffle mousse at the bottom of the bowl. The spit-roasted local duck, tender and juicy and glazed with maple syrup, is a signature dish, served with asparagus, mushrooms and a spinach mousse, and paired with a 2005 Dominique Portet Fontaine from the Yarra Valley (Cabernet, Shiraz and Merlot blend). I was happy my room was only an elevator ride away.

Laurie Raphaël was the destination of choice at lunchtime. This modern and creative restaurant is conveniently located next to the Marche Vieux Port. The daily “Chef! Chef!” menu is a surprise, and the three courses are put together at the last moment depending upon the chef’s inspiration that day. Laurie Raphaël’s unique concept of restaurant, workshop, boutique gives patrons the opportunity to sample culinary delights. Try out their skills in the demo kitchen, and purchase house-made creations. 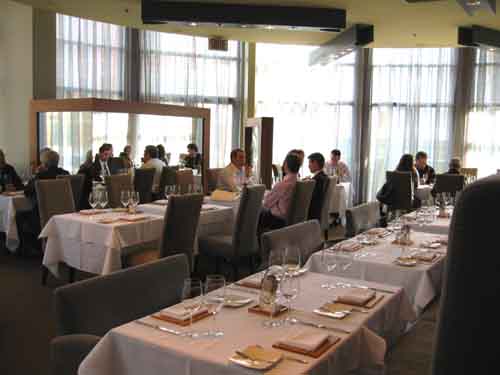 Before or after dinner, take time to sneak into Le Pape George. This intimate wine bar offers numerous wines by the glass, tapas-like treats, and great music in the evening.
When dinnertime rolls around again, visit one of Quebec’s City’s long-standing favorites: Le Saint-Amour. The front room is small and cozy, and in the rear of the old stone house is a delightful and airy dining room. Think about the strip loin of beef, with Yukon gold potatoes and caramelized cipollinis paired with a 2005 Jackson-Triggs Cabernet Shiraz blend from Canada’s Okanagan Valley.

The next day, we toured Ile d’Orleans, 15 minutes outside the city. This charming rural island is home to artisan growers and producers and is known as the “Garden of Quebec.” It’s easy to create your own gourmet tour of the island, topped off with a stay at an auberge (inn). One stop was Cassis Monna et Filles where we tasted luscious black currant jams and authentic cassis. The family there is the fifth generation of liquoristes and began operating in 1872. Next stop: Le Canard Huppé, where local lamb was a winner. There’s much more after these adventures, so save room for the wines, chocolates, sweets, and smoked treats available all over the island. 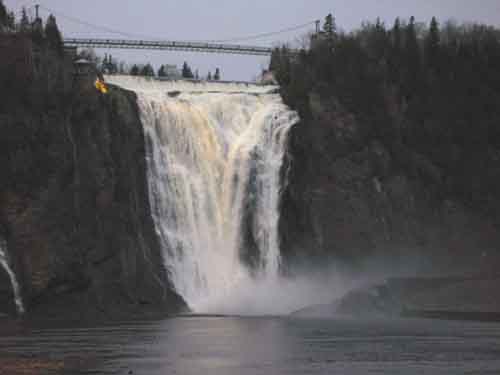 Montmorency Falls is visible once you’re back across the bridge that connects Ile d’Orleans to the mainland. From a height of 83 feet, watch over 9,000 gallons of water per second cascade down the cliffs. They can be viewed from several angles via cable car, footbridge and stairs. The final evening, we were hosted by the only female chef in Quebec City — Marie-Chantal Lepage at Le Monte Cristo Resto Lounge. Located just outside Quebec City in the five-star Chateau Bonne Entente Hotel, the restaurant combines the best of New York and Las Vegas. It’s trendy, yet rustic and locally inspired. We savored maple-glazed breast of quail with smoked lardons and roasted lamb chops with a wasabi crust, both served with a 2005 Clos La Chance Pinot Noir from our own Santa Cruz Mountains. The combination of flavors and the ambience was a delightful feast for the senses.

There’s no significant jet lag involved in this trip to a taste of Europe in North America. Try it — it’s delicious.