Vietnam… this is the place to visit, many have told us. Being from the generation raised during the Vietnam War four decades ago, we hadn’t really thought of this as a tourist destination. But reports, regarding how interesting the country is and how friendly the people are, perked our interest. Thus, when we read about Crystal Cruise’s 11-day Exotic Asia Cruise in late April, we signed up-the itinerary included four days in Vietnam.

Statistics show that over the past 10 years Vietnam has seen an extraordinary growth in tourist numbers-almost 300 percent since 1998. Of course, with the current economic downturn, tourism is off. This may be a good time to sign up, with travel bargains in the offing.

On the cruise, we embarked from Hong Kong, and crossed the South China Sea. First port-call was Chan May, not far from Hue. A guided tour of the ancient capital was the first of several excursions we would take while on the cruise.

Our first stop was at The Royal Citadel, a walled imperial city from the 18th Century. On a hill, it impressively rises above the city. We were struck immediately by its resemblance to Beijing’s Forbidden City, on which it was modeled.

The complex is like a series of boxes within boxes. Surrounded by a wide, zigzag moat, the first structure consists of the defensive wall fort with 12 gates. Within, there are two other monarchal areas, the Imperial Enclosure and the Forbidden Purple City, reserved for the private life of the royal family. We were particularly impressed by the beauty of this section with its red, purple and gold columns and lavish furnishings.

Following this visit, we boarded a “dragon boat,” colorfully painted, with the bow, a fearsome dragon head and the stern, a long dragon tail. Our group then settled in for a leisurely sail up the Perfume River, observing the river life on houseboats and sampans.

After a half hour, the towering 17th century seven-story pagoda, Thien Mu, perched above the shore, came into view. Ironically, it was the site of violent protests in the early sixties against the U.S-backed Diem regime. Today the temple is a serene place where monks deliver incantations.

Next, we went to a local hotel for lunch. Prominent on the buffet table were shrimp, prepared in various ways. Farm-raised shrimp and seafood are among Vietnam’s staples and one of its fastest growing exports.

After lunch, we entered the vast Dong Ba Market, one of the must-see sites for its size and variety of commodities. The intense colors and mix of smells is almost an assault on the senses. All manner of food-vegetables, meat, fish, seafood-as well as clothing, crafts and jewelry is on display. Everything appears fresh, but in the stifling 90-degree heat and high humidity, the sight of un-refrigerated pork next to writhing crabs didn’t seem appetizing. 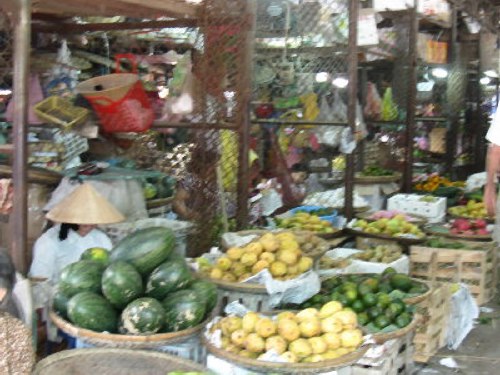 Back on the bus, there was one more stop-the magnificent tomb of Minh Mang, considered the most brilliant of the Nguyen Dynasty which reigned in the 19th – 20th centuries.

This turned out to be one of the highlights of that day’s tour. The tomb is located eight miles outside of Hue in a beautiful country setting. It overlooks the Perfume River, on one side, and a lake, on the other. Cool and tranquil. Statues of horses and elephants guard the entry to a series of temples and pagodas, leading up to a massive burial mound. The tomb’s lovely green and yellow tiles glisten in the sun.

Because of road-repair work, our return journey on the two-lane highway that connects north and south was particularly tedious. During the war’s aftermath, the population has exploded, and the country’s infrastructure has yet to catch up. Our driver also had to be wary of the trucks which were often stopped by officers along the roadside. He said that the cops were “shaking down” the drivers. “The police are getting rich this way,” he said, cynically.

Our next day at sea took us farther south toward Ho Chinh Minh City, Saigon, as it was known before 1975.

A sea day gave us another chance to appreciate our ship, Crystal Symphony. Not only beautiful, she is well-planned with numerous comfortable lounges in which to relax or listen to live music or enrichment lectures.

Those waking up in time could avail themselves of breakfast in the Crystal Dining Room or in the Lido Cafe, a buffet on the pool deck. Either spot presented attractive and delicious offerings such as light, crisp waffles, fluffy omelets or assorted hot and cold cereals.

Executive Chef Markus Nufer and staff presented the finest cuisine we have ever had on board a ship. From the Bon Voyage Dinner through the Farewell Dinner, each evening’s selections were attractively presented, delicious and just the right size. One of our table mates enjoyed duck prepared numerous ways over the course of our journey, while the rest were enthusiastic about the various steak, lamb and seafood offerings. Another at the table was on a gluten-free diet and was pampered with special breads by Mukesh, our efficient and friendly server.

Two other dining rooms-Silk Road for Asian fare and Prego for Italian-offered outstanding options, the latter renowned for its signature cream soup of selected Italian mushrooms. Twice on our 11-day journey the crew prepared a luncheon buffet poolside-one an Asian buffet and the other an All American barbecue with meats, chili, apple pie among the tasty selections. 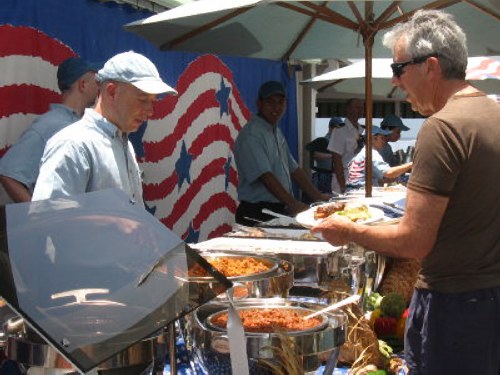 The attention to details is what makes this ship so special. Whether it’s the decor in the dining rooms or the design and colors in the staterooms it is a gorgeous ship. Thick pile carpets in either blue, rose or lavender mark the cabin passageways. Once inside, cabins are light and airy and feature a large closet with sliding doors.

The cruise also had a golf theme. For golfers our stops in Chan May, HCM city and final destination, Bangkok, Thailand, provided opportunities to play. Crystal offers three golf-themed cruises a year in destinations throughout the world. As ours did, each has a PGA instructor on board to give special attention to players.

We had two days in Ho Chi Minh City which gave us many options for activities. A city tour was our first-day choice; the next we went on our own.

Going to town, we noticed the bus was in a thicket of motor bikes. Only an occasional car or truck was spotted amid shoulder-to-shoulder cyclists. Of the near seven million people in HCM City, we learned, one-half own a motorbike. With virtually no public transportation, all day seemed like rush hour.

Nearly every family member-husband, wife, teenagers-have a motor bike, our guide said. He also pointed out that there are an alarming number of accidents; careless driving and hazardous roads are a major problem.

Because Vietnam was a French colony-French Indo China from 1887 to 1947-there is a decided European influence on the city’s architecture. On the list of tour stops was the mammoth Central Post Office. This gothic building was designed in the early 20th Century by famous architect Gustave Eiffel. Its high ceiling brings to mind Parisian market halls; fans hum among ornamental pillars and sunlight streams from windows above.

Across from the post office, we visited Notre Dame Cathedral, built in 1880. With white twin spires atop the red-brick building and beautiful stained glass windows inside, this is a stately companion to the lively Buddhist temple close by.

The exquisite 19th Century Thien Hau Temple is the country’s most popular religious site. The Vietnamese are largely Buddhist and, along with monks and tourists, there were many worshippers. As we entered, incense wafted amidst twirling metal mobiles hanging from the ceiling–the total effect was dizzying. Along the temple wall, were delicately carved scenes from epic battles and daily life. We could have spent a half-day here, but it was soon time to move on.

Next, we went to the impressive Reunification Hall. The seat of government for President Diem of South Vietnam at the beginning of the war, it became the site of the official handover of power to the Communists after the fall of Saigon in 1975. This is the location of the only large, park-like green area in the heart of the city. Young and old gather here to stroll or relax on benches.

While heading back to port, we noticed many small, narrow three-to four-story buildings. The guide said that numerous extended families, including his own, live in these type homes. Since government provides no social security, he said, the young have to support the old.

Typically, three generations live in one dwelling. In the guide’s family, his parents live on the first floor. He and siblings with their families live on the other floors. His sister-in-law does the cooking, and the household of 12 eat together every day. Since every family member from teenage on needs a bicycle, he said finding parking places for them could be a problem. In the city, we had seen as many as five on a bike, though.

The last day we first visited the controversial War Remnants Museum. Divided into five sections, the museum deals with the cause and origins of the war, according to Vietnam officials, that is.

The “Requiem” part is the most moving with photos taken by journalists worldwide; the most contentious portion is the “Vestiges of War Crimes and Aftermath,” showing photos of war victims, injured from such as bombings and “Agent Orange” attacks. The photographs of the debilitated and dead are both haunting and sickening. As guide books point out, this exhibit is not politically balanced, with much undocumented.

We later talked to Vietnam War veterans aboard ship who had visited the museum. Some were angry about the exhibits; others moved by them.

Regarding the Vietnam War, there were several ship excursions listed, most notably Memories of War. This included a stop at the Cu Chi Tunnels, an immense network of connecting underground tunnels located near the city. These are part of a much larger network of tunnels that underlie much of the country.

The tunnels were used by the Viet Cong as hiding spots during combat. They served as supply routes, hospitals, weapon caches and living quarters. The role of the tunnel systems in winning the war should not be underestimated, experts say. Among other things, the tunnels indicate the stubborn persistence of the North Vietnamese in prolonging the war, eventually persuading the weary Americans to get out.

For lunch, we wanted to go to eat pho at a place where the locals go. We had eaten pho a few times in Southern California’s Little Vietnam and loved this succulent noodle dish. We asked our guide about it the previous day. He recommended a couple places but stressed that we go to Pho 24. When we got there it was obvious that this was a cut above small eating places we had passed. With its decorator touches and clean cut furniture it looked more like a Corner Bakery in the U.S. It became obvious the guide thought we should go to a sleeker place.

We found later that this is one of a chain of several in Vietnam and Cambodia, geared for the better-off and tourists. As it was, the pho was great…the bill for two, plus drinks, only seven dollars.

Time to say goodbye to Vietnam. We sailed that night for Bangkok. For us, Vietnam and the cruise were everything we hoped for and more.