As we circled to land at Kilimanjaro Airport, seeing the famous 19,341-foot (5,895 metres) high snowy peaks above the clouds was thrilling. The city of Arusha, about a half-hour away, has about 400,000 residents and a second airport for small planes. We were surprised by the choices of modern hotels, restaurants and shopping facilities, obviously serving many western ex-patriots and tourists. The city also has charming buildings and parks from the time of British colonial leaders, as well as many little shops and a huge market for the Tanzinian locals, many of whom come from surrounding tribal villages. The colorful mish-mash in the busy city streets made us wide-eyed with fascination. The women wore lots of beads with their two colorful, printed cotton kangas, the typical African dress of a shawl and skirt. As they walked along, erect as soldiers, chatting happily with their friends or holding a baby, many were balancing huge loads on their heads. Some men wore jeans and T shirts, but the most interesting ones were wrapped in bright blankets of different colored plaids, which indicated their tribes. Our main impression was the huge white smiles on the happy, black faces. Tanzanians seem to be perpetually happy as well as very welcoming to the thousands of visitors who flow through this interesting city each year to get supplies for safaris of all kinds. Of course, as in any city, one must be careful for pick-pockets.

Our first day in Tanzania was a long one, having flown overnight from another part of Africa, but this first day of Safari was so very exciting. We went immediately from the airport to nearby Arusha National Park, the smallest of the National Parks in Tanzania and often missed. Abrojaley Africa Ajabu tour company, which planned our entire trip, provided the two of us an EXCELLENT guide, Manase, who drove us in a well-equipped and comfortable Toyota Land Cruiser very carefully over the bumpy terrain, which climbed quite high so we could have good views of the crater valley and the 4,500-metre peaks of Mt. Meru within the park. This park covers 137 square kilometres (52.0 square miles.)

The park is surrounded by thick forest reserves, which are soon to be protected within its boundaries. These consist of many ancient cedar trees, which serve as good cover for the herds of mountain elephants who eluded us all day, although we saw their tracks. These are smaller than the savannah elephants of other parks. But we did see many species of African wildlife as we traveled all day through this special preserve.

We loved watching the black and white colobus monkeys, who resembled skunks, swinging through the trees. And our favorite was to laugh at the antics of the families of baboons who travelled the road with us and picked insects off of each other and ate them by the roadside. September was the season of many nursing babies, attached to their caring mothers. The interaction of the families was so similar to that of humans. 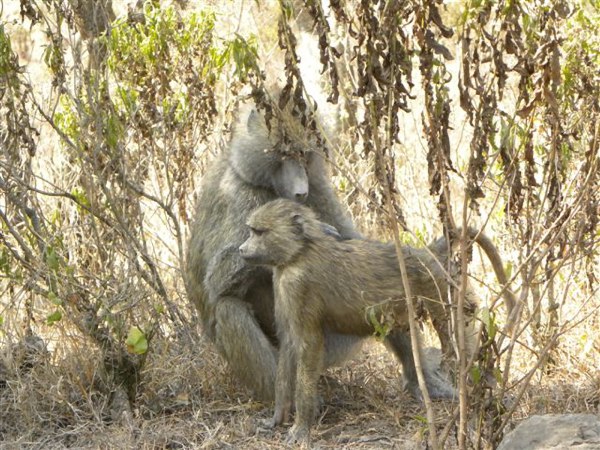 Arusha National Park is in a densely populated area of Tanzania and is a great treasure to have been set aside as a preserve for the native animals and their natural, undisturbed habitats. The park includes the Meru Crater, an extinct volcano, where there are several lakes and the area is swampy. This attracts thousands of birds and over 400 species have been identified here, either residents or on migratory journeys. Manase could spot birds that we never saw until he carefully pointed them out, telling us all about their habits and having us listen to identify their calls. At home I can never seem to photograph a bird because they are too swift. Here they must be on the African pace of “pole-pole” (slowly, slowly, arrive home happy… a wonderful slogan to remember and follow!) We were able to get many good photos of the various, beautiful species because they seemed to pose for the shots. 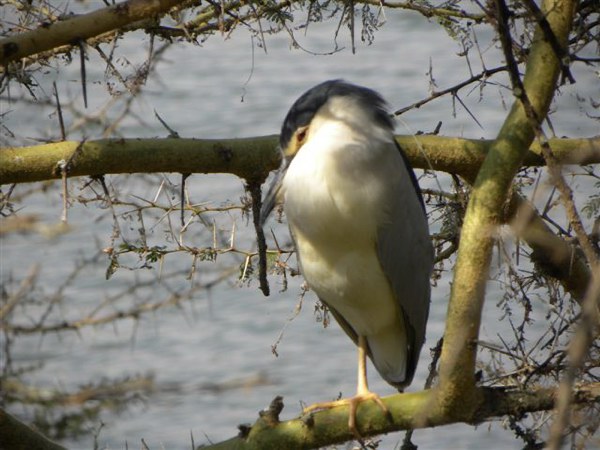 After riding all morning and seeing so much wildlife, I was getting hungry and realized we were miles from any store or restaurant and wished I had brought a candy bar and soft drink. Since this was our first safari day, we didn’t know what to expect, but no sooner than the idea had crossed my mind silently, Manase stopped at a nearly hidden picnic table and brought out individual picnic boxes of home-cooked and specially prepared meals for us. We had a delicious lunch of bar-b-cued chicken, a large sandwich, cookies, candy, fresh fruit, vegetables, hard-boiled egg, and bottled water! Each box held about twice as much food as we could eat, but it was delicious!

As we ate I spotted a yellow hornbill bird, which I had learned about in a TV documentary and was fascinated to be able to see it in person. I think it was a male, and as we watched this weird bird, he either brought food to place into the mouth of his mate who was sitting in the nest closed up within the hole in the tree, or he was cleaning the nest from the droppings of babies. We could not tell which, but he repeated the motions with his mouth the entire time we watched and photographed him along with some other tourists nearby. He was so intent on his job he never seemed to notice that he was the fascinating subject of many huge cameras pointing at him!

We visited a small museum within the park and were able to learn the names of many birds and animals we could see here. The restrooms at the park entrance were amazingly pretty, clean, modern with western style flush toilets with paper, running water and soap. These are details every tourist can appreciate! 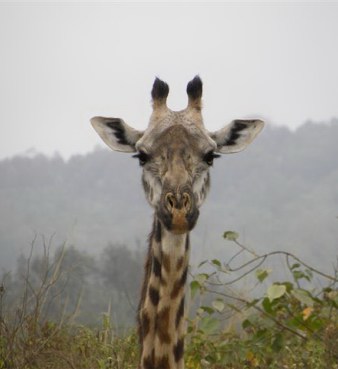 As we bounced along through this park all day we saw herds of Cape Buffalo, giraffe, zebra, warthogs, and bushbucks and many other individual animals. We came to the Momella Lakes, which are highly alkaline and salty. Flamingos love the fine smorgasbord they find here and we saw literally millions of them. The flocks line the edges of the lakes, making a pink border. In one place we saw white flamingos swimming serenely like swans. This was a lovely scene to end our day, and Manase returned us to the city to meet the head of Abrojaley company, Abdul Meena. We found him to be very personable and friendly, as well as thoroughly knowledgeable of his country and all its wonders.
He shared with us his exciting plans for our week of Real Travel Adventures in Tanzania, and we were so keyed up we could hardly fall asleep. A wonderful beginning for our week of Safari.