Disoriented in the darkness, I saw an outline of my husbands’ body lying next to mine. Shouting and loud explosions knocked against our window, shaking the narrow building we had been sleeping inside. In a moment I recalled the country, the city, the reason I was there, here, in India. India, extraordinary… country of extremes, from great riches to the walking dead, dramatic landscapes reaching Himalayan heights, to the dry devastation in central valleys below. We had entered Uttar Pradesh and I was in the city of contradictions, Varanasi. (www.varanasicity.com) One of the oldest cities in the world, one of India’s holiest and one of the most deceitful.

Getting out of bed, I pulled a comfy sweater over my head and peered over our balcony. The streets were celebrating the end of Diwali the Hindu festival of lights, homecoming of Rama. (www.diwalifestival.org) Firecrackers were being tossed in all directions, distant drums passed along the small alley below my room and cheers rose above all other noises. It was the drummers who first caught my attention, with their passionate beats, arms wailing against the skin of the instrument. Men were dancing between the crowds and ladies looked on from a distance as did I. Generals marched by with rifles and swords slung across their shoulders. Then I saw the camels and behind them, dead bodies resting on wooden carts.

My husband and I had arrived in Varanasi earlier that day on a train coming from the far north. Crossing the Indian border from Nepal, we had homed in on the green, white and orange banner welcoming us. As worn down westerners carrying all our worldly possessions by backpack, we were obvious candidates in need of passport control. Some locals did point us in the right direction without hesitation. Waiting on our arrival, two officials greeted us alongside the main road connecting India and Nepal. Dust had settled over the portable table and documents. We took a seat and waited. When passing through immigration I always have a slight panic, a thought that just maybe I will be refused entry, but when the officer signed my visa and threw it back at me I felt welcome enough. The next hurdle was transport.

Catching a bus heading south our goal was to get in touch with India’s broad-gauge railway. The bus was one of the nicest I had been on since touching down in Central Asia, fairly clean, padded seats, not a jingle of loose bolts, with digital entertainment of the latest Bollywood smash hit. Not long after we commented on the appealing condition, the engine fired-up and the refreshing breeze from my window ceased. Our bus pulled to the side of the road. We were about an hour into a three-hour journey to Gorakhpur. This was not the first time a bus had fallen victim to an overworked and under attended day, but when the driver began to dismantle the clutch we hailed the next passing bus. 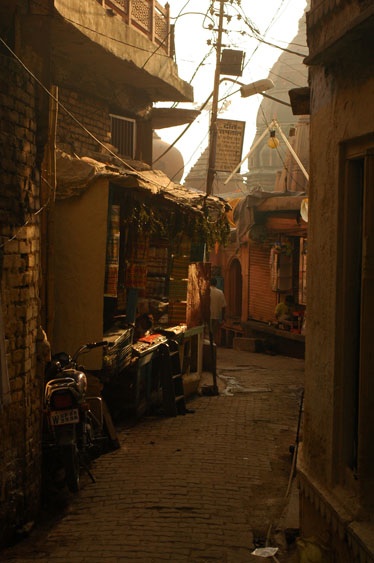 Our efforts most likely got us to the grubby city of Gorakhpur hours earlier then fate had intended and from there we got on the next train to Varanasi. “From which country, madam?” Our rickshaw driver reached to the back to greet me. I pretended not to hear the question, while my husband sat quiet next to me. I gave him a welcoming smile towards the rearview mirror, “We just came from Nepal,” I shouted through the thick air. The engine revved, there was no point now in continuing the conversation, I sat back just in time to see the drivers face smile at me. Red beetle nut juice oozed between his long narrow teeth and he clicked the stereo on.

As deafening as the music was in my ear, I was literally sitting atop the speaker, the sound quieted my mind and I watched the city of Varanasi unfold before my eyes. The scattering of shops spilling out into the street, block upon block, metallic containers, rainbows of bangles shimmering in the sun, greased motor parts, jewelers dressed in white cupping hot tea, young women hovering around fruit stalls and cows grazing through the garbage. The low rays of the sun tangled in the mess of dust particles as we veered into a small alley, avoiding collision with an ox cart. Our driver then dropped us in old town Varanasi.

Walking alongside the Ganges River, sweat began to build on my forehead, passing the burning Ghats, funeral after funeral; this was after all, where people come to die. Ash from the burning wood and bodies’ fell like snow, reminding me that death is as ordinary as life. Depending on their cast, bodies are burned on the sacred ground or raised platform after a ceremonial cleansing with the river water. It is believed that if you pass in Varanasi the vicious life cycle will come to an end, and eternal peace is yours.

With each cautious step as to avoid the cow dung, dog crap or human waste, we were approached by someone. People asked if we needed a boat ride, a tour, a guesthouse. Can we donate to this funeral or that funeral? Do we want this or that? Anything! One child after another, “what country? Where are you going? Where did you come from?” Men stumbling for words, holding chrome pots for donations, fakes I am sure they were, touts, commission hungry, every one of them hoping to drain a little something, appearing from dark alleys and cracks in the walls. We ignored them for the most part, but with the increasing smell of urine, falling ash and buzzing flies there left little calm in me. Turning down an alleyway, in a crazed state, I jumped towards a doorway to the right just after seeing a guesthouse sign.

It was a clean quiet place, an oasis of calm. The owner ushered us upstairs on arrival to a spacious room and we checked in for a two-night stay at Sankatha Guesthouse. At the rooftop café human existence was scarce; the tables were of course exposed to the outdoor elements, with a layer of fine grey ash. But I was too tired to complain and scanned the menu. Meanwhile the owner sat down with us and told us a story of recent guests, their personal trials and tribulations and their quest for silk. He explained how to tell the difference between polyester and silk, then went on to explain if we were interested, he could escort us to a silk shop in the morning. With pleasure he spoke of the favor he would doing us. Of course, not seeking a commission as other hotels are doing.

I of course declined and retreated to my room, showered and collapsed in a heap on the bed. It was hours later that I was shaken from my sleep and crept to the balcony to witness the festival of lights.
Sword dancers paraded down the narrow passages in masked costumes, drifting between the streets, and ghostly floats carried small bodies of children neatly wrapped in silken cloth from head to toe. Sitting lifeless atop wooden poles, rocking with the movement, lit by lanterns, their shadows would go racing down the narrow alleys towards the burning ghats. Families on rooftops huddled together to watch the performances in the street, and bodies continued to pass wrapped in silk, peacefully laid upon wooden frames. Members of each funeral procession passed, some quiet and some grief stricken wailed in remembrance of their loved ones. I had never felt so immersed in death and it was then that I remembered the holiday being celebrated on the same day back home, it was Halloween.