One summer 2000, after kayaking for a week in the outer islands of Tonga, I touched a whale.
Tonga is an island nation in the South Pacific, the only island group in Oceania that wasn’t conquered or colonized by a Western nation. It is the only surviving hereditary monarchy of the Pacific island nations. Tongan kings traditionally weigh over 300 pounds and wear an apron woven from pandanus reeds.

The week of kayaking was guided by a local company, Friendly Islands Kayak Co., which is owned by a Kiwi couple. Our group was an eclectic and cosmopolitan group made up of a Swiss couple, an Aussie couple, two Canadians, a Swede, me (American) and two guides, a Canadian and a Tongan.

We paddled around the Vava’u group of islands, tent camping and cooking out on pristine sand beaches. We had several tough paddling days battling wind and surf, but each day we arrived at our campsite with time for snorkeling and exploration of the mostly deserted islands. 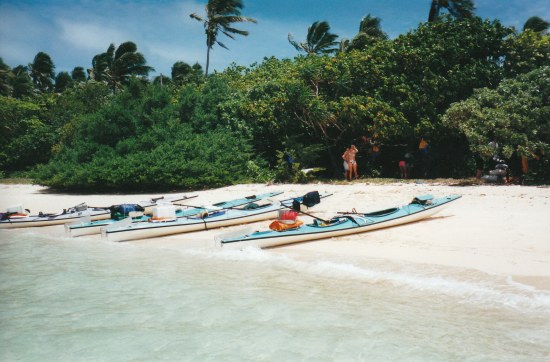 The social highlight of the kayaking expedition was an ‘umu feast in a remote village called Mata Maka on one of the outer islands. We dined with the village elders while the village girls entertained us with traditional dancing. The dinner featured pig, which was roasted in a wood-fired pit-oven for twelve hours. But it included about thirty different dishes spread out on the floor in front of us. Our group made a small dent in the massive amount of food prepared for us. But no one felt bad about the leftovers, because everyone drank so much kava (the Polynesian version of distilled spirits) that no one felt anything other than a delightful alcohol-induced party high. 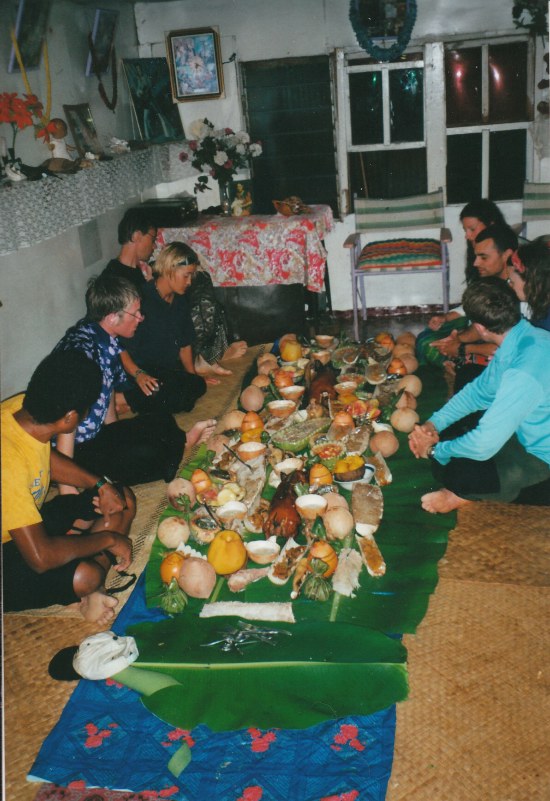 After we paddled back to Neiafu, the only city in the Vava’u islands, I had a few days of free time before my flight to Auckland and then home. Neiafu turned out to be a wonderful place to kill time. I participated in a fruit bat hunting (with cameras) expedition in the jungle led by a New Zealand research biologist; crewed in a yacht race on a French-captained yacht; hung out with a couple Englishmen sailing around the world; shared poetry with an American who was sailing around the world but met and married a Tongan woman and had instead anchored off Neiafu for ten years; and had tea each afternoon with four Kiwis in their seventies who had spent their childhoods in Tonga but had to flee the islands to avoid capture by the Japanese during World War II. The most memorable experience, however, was swimming with a humpback whale and her calf.

I spent half a day on a whale watching boat. We spotted a bull, mother and calf humpback whales. Several hundred humpbacks spend July to October around Tonga mating and birthing and then training their calves before swimming south to their feeding grounds in Antarctica. Adult humpbacks are forty to fifty feet in length.

The bull kept its distance, but the mother and calf teased us. Whenever we got within fifty yards of them, the whales would dive. Anjo, a speedboat captain who I had met in my wanderings around Neiafu, offered to take three of us off the slow moving whale watching vessel to try to get close enough to the whales to swim up to them. The superior speed of the speedboat might allow us to approach the whales before they dove away from the boat. A Floridian, a Japanese guy, and I jumped at the chance.

Fifteen times we approached the mother and calf when they surfaced, and then we jumped in the water and swam as fast as we could toward them. Each time the whales sounded before we reached them. The boat captain gave us one last chance as he was low on fuel and it was time for us to get back on the slower boat to be taken back to Neiafu. The three of us dove in with fins kicking as hard and fast as we could. Anjo told us splashing bothers whales, so we kicked with our fins below the surface and didn’t stroke with our arms to minimize splashing. 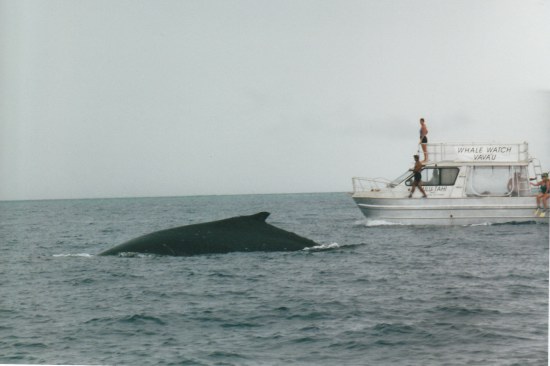 The mother and calf didn’t dive this time. They swam just below the surface staying about twenty yards ahead of us. Tashio, the Japanese guy, tired from the fifteen times we had already swam after the whales, gave up the chase after about fifty yards. Kevin, the Floridian, broke off after one hundred yards. I kept kicking. After another fifty yards of pursuit, the whales stopped. The mother let me swim up beside her, but kept her baby on her other side away from me. I swam up beside her huge eye, turned on my side and looked through my snorkel mask into her eye, which was as big as my head. She looked back at me. Our eyes locked. Time stopped. It was if we were looking into each other’s souls.

She rolled and nudged her calf with her flipper to encourage the calf to swim over to me. The baby whale swam up to me, swam under me, then circled around me, and let me caress its tail. It was extraordinarily smooth to my touch. The calf returned to its mother’s side. They began to swim off slowly. I swam with them for about one hundred yards, but then another whale-watching boat approached. The mother gave on great flick of her tail and they vanished deep into the dark water below me.

I stroked back to the speedboat and clambered up the ladder and dropped over the gunwale. I could barely stand. My legs were vibrating and shaking so much from the thrill and power of the encounter. For a few moments, the otherness separating the mother whale and me had vanished. We looked into each other’s eyes and saw trust and acceptance, instead of fear and danger. She trusted me to caress her baby. I trusted that she would not crush me like a minnow with her gigantic tail. I can still see her awesome eye in my mind’s eye. And I remember how she trusted me with her baby. It would be a good thing for our finite planet if humans could see the soul of all other species, especially the endangered ones. 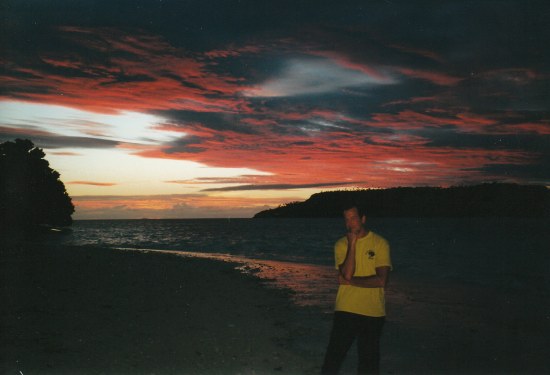 The Author; Nightfall on the Outer Islands of Vava’u