Have a hankerin’ to experience some great, old-West history? Try Southwestern Wyoming’s Fort Bridger State Historic Site. A visitor pamphlet states that in 1841 mountain man and explorer, Jim Bridger, said to some would-be suppliers on the Oregon Trail, “I have established a small fort, with a blacksmith shop and a supply of iron in the road of the emigrants on Black Fork of Green River which promises fairly”.

Bridger’s words proved prophetic because not only did the location “promise fairly,” it proved to become one of the main hubs of westward expansion used by other mountain men and Indians at various times over the years, as well as pioneers, the U.S. Army, the Pony Express, and the Overland Stage, as well as the Union Pacific Railroad.
It’s been said that if anything of importance happened in the opening of the American West, it affected, or was affected by, Fort Bridger.

A new, exciting 30-minute film shown at the on-site museum highlights the 150-year history of the fort, divided into the five “M” periods of its history: the first “M” was the Mountain Men Era when Jim Bridger first built his trading post, followed by the next “M”, the Mormon Era when Mormons and other pioneers stopped here for provisions. The third “M” was the Military Era which lasted from 1859 to 1890 when Army soldiers occupied the Fort. Fourth “M” was the Milk Barn Era when the fort was sold to the public and one of the larger buildings was used as a dairy farm. The final “M”, the museum Era began in 1938 when the site was sold to the State of Wyoming and later designated as a state historic landmark. 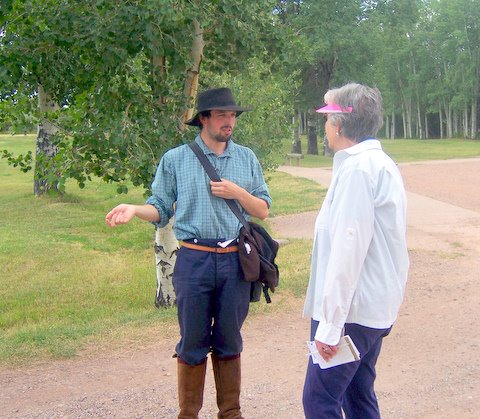 The past comes alive at the site through living history interpreters, life-like and well-designed, interactive museum displays, as well as a careful reconstruction of many of the buildings, including the trading post, barracks, post commissary, bandstand, and Victorian-style homes where officers and old-time wealthy families once lived. 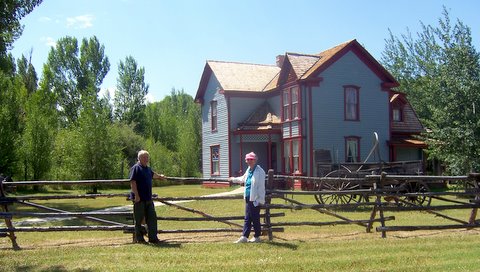 As the two of us walked the stately grounds studded with stands of white-barked aspens, we thought of Montana which has the famous “River that Runs Through It.” Here at Wyoming’s lovely historic site, clear and sparkling streams also “run through it,” and the entire park has much to recommend it as a great place to visit.
An interesting sidelight to the Jim Bridger story is that Chief Washakie of the Shoshone Indian tribe gave his daughter in marriage to Jim Bridger, helping to effectuate a peace treaty in 1863. There’s a pleasant picnic area at the park, but no overnight camping. The site is open year round from 8 a.m. to sunset daily. The museum is open from 9 a.m. to 4:30 p.m. May 1 through October 31.

To learn more about Fort Bridger and other Wyoming State Parks, go to http://wyoparks.state.wy.us/