Can you even imagine living in your car at this place and conceiving and rearing three children here? That is how dedicated Louis and Mary Leakey were to their archeological research for the British Museum. They came to this site in 1923 and spent most of the next 70 years here, finding fossils 150 million years old, stone tools, animal and human signs. In 1960 their son Johnathan found a sabir toothcat fossil next to what Mary recognized as humanoid fossils.

Ultimate finds in this Laetoli layer brought about their making one of history’s most important discoveries: The foot prints shown here were discovered in volcanic ash which had turned to stone. This find showed that humanoid beings, homo erectus, walked upright 3.6 million years ago. The Leakeys also found tools made by these humanoids.

We picnicked at the crest of the plateau overlooking the Olduvai Gorge, which is a 30 mile long and 295 feet deep ravine in the Rift Valley in Northern Tanzania in the Eastern Serengeti Plain. The site is named for the stone tool technologies, called Olduwan, which were made 2,100,000 years ago until 15,000 years ago. These are among the oldest stone age tools ever discovered. There is even a stone dwelling 1.5 million years old. We owe much that we know about the Cradle of Civilization to the work of the Leakeys. The archeological research continues today and you can visit some of the sites.

The little museum here has some interesting displays of fossilized animal and hominid remains with good explanatory signs in English and many photographs of archeologists at work. Discovery of wildebeest skeletons show that these animals have not changed in two million years. Although they are funny looking they are perfectly adapted to this environment. 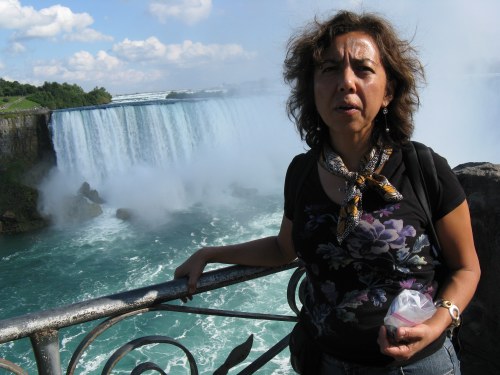 Just outside the museum are tables of crafts made by the Masaai tribe. It is a good place to make your purchases, as the prices are much cheaper than in some of the other places we saw the same designs for sale. And you can bargain with the native sellers.