An invitation to visit a few of the 12 family-owned wineries along the UnCork York Wine Trail led me to do more research on the York County area. Located about 4 hours from NYC, the city of York is also less than 55 miles from Baltimore, Gettysburg’s Battlefields, Harrisburg (PA capitol), Hershey’s Chocolate World and Lancaster’s Amish Country. Having been to all of the other five I decided 3 days in York County would work for me. Available tours include a brewery, a weaver, woodcraft, a farm dairy and of course Harley-Davidson Motor Company. York Barbell is a reseller of barbells and other equipment for weight training and bodybuilding and is the home of the USA Weightlifting Hall of Fame.

The historic York Fair, which claims to be the country’s oldest, traces its roots to 1765. It runs every year in September for 10 days. I wish I had more time since I was there during its run. When you get hungry there is always Hershey’s Chocolate World, Martin’s Potato Chips, Revonah Pretzels, Synder’s of Hanover, Utz Quality Foods, Wolfgang Candy and Stauffer’s Biscuit Company. One can visit more than 20 factory tours to discover how America’s favorite products are crafted and all are made right there in York County.

Nothing was more than 35 minutes from my other stops and both Map Quest & my GPS system kept me from ever getting lost. I only wish the State of Pennsylvania was more accommodating to the wineries by allowing Wine Trail signs and did not charge an arm and a leg for the few signs they did allow.

York was founded in 1741 by settlers from the Philadelphia region and named for the English city of the same name. York was incorporated as a city in 1887. During the American Revolutionary War (1775–1783), York served as the temporary capital of the Continental Congress. The Articles of Confederation were drafted and adopted in York. During the American Civil War (1861–1865), York became the largest Northern town to be occupied by the Confederate army.

My first stop was at Susquehanna Glass in Columbia, about 30 minutes from my home base of York. Founded in 1910 it is still in the Rowen family today. With a few exceptions the equipment is the same used almost a century ago. My private tour showed me how personalized engravings were made on different styles of glass. The company does not make glass but purchases standard sizes and makes them special. Have a favorite NFL, NBA or MLB team? They will use the official logo for that team and add something personal (name, occasion etc). While in Columbia spend a few minutes at the National Watch & Clock Museum. There have over 12,000 treasures of time. 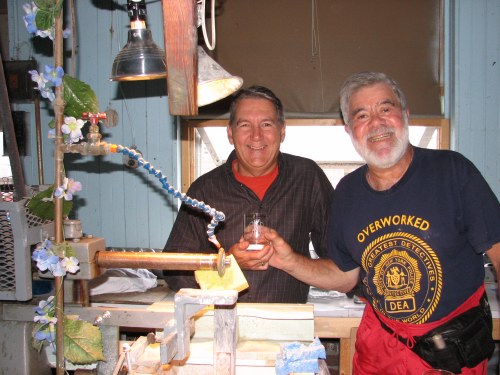 My home for two nights was the Lady Linden B&B in a restored Victorian Queen Anne style B&B built in 1887. Jim & Jean Leaman lived across the street and decided to lovingly restore the 3 bedrooms available as well as the parlor, dining room and grounds to its former splendor, as well as moving in upstairs. Dinner the first night was at the Commonwealth Room of the Yorktowne Hotel which opened in 1925. It is York County’s only AAA Four-Diamond restaurant. They are a member of the Historic Hotels of America. Chef Mark Pawlowski prepared a 7-course winemaker dinner, with wine pairings, just for me. I never made it through the 7 courses. 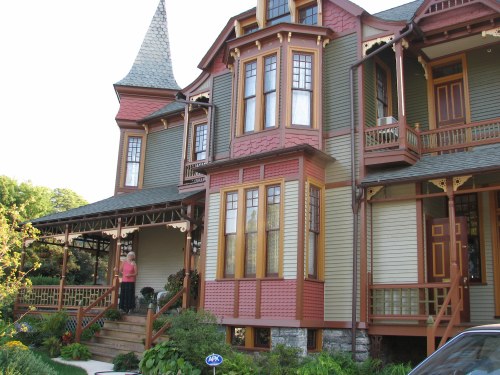 The next morning I walked around the historic downtown district past the Strand-Capitol Performing Arts Center to the Central Market House. Fresh produce, meats and cheeses along with assorted gift items filled one of the oldest market houses in the country. It was now time to begin my UnCork York Wine Trail adventure. On Friday-Sunday November 20-22 from 11AM-5PM Wine Just Off The Vine allows participants into the cellars of 10 wineries for tank and barrel tasting of newly pressed wines fresh from the harvest. For $10 you receive an UnCork York Wine glass and a 10% discount at participating wineries. I was able to visit 4 of the 10 wineries starting with an old friend Dick Naylor, owner of his namesake Naylor Wine Cellars. He believed that York County could produce premium wines when he started 30 years ago. As an aside he is still active in his mid-80’s but his mother is 107 and still going because she has a glass of his wine every day. We used an ATV to tour much of his 27-acres of vines with over 40 varieties. He has a pavilion for musical presentations along with a wine and food stand. 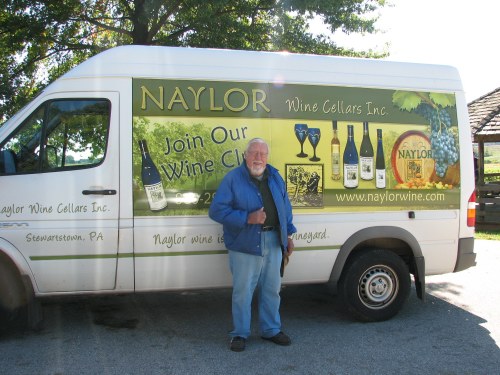 William Penn brought grapevines with him to the New World in the 1600s. Traditional native grapes such as Concord, Niagara & Catawba along with hybrid varieties including Chambourcin & Vidal Blanc are grown in certain parts of the state. The humid summers and often-frigid winters dictate which grapes grow where. There are parts of the area that are warmer and have cool microclimates that allow the classic European vinifera grapes Chardonnay, Riesling, Cabernet Franc and Cabernet Sauvignon to flourish.

Who knew that I would find paradise in Seven Valleys where I spoke to co-owner Charles Aldinger at his boutique (1,000 case) Four Springs Winery? I loved his labels for Fat Cat red wine and City Kitty white wine because Renoir, my 2-year-old city fat cat, loves sipping wine. Across the street I had lunch at Serenity Station Deli Café. The building houses a day spa run by Barbara Smeltzer while her husband Steve tends to the restaurant and gave me a history lesson. The building is 170 years old. The old Northern Central Railroad ran along what is now the York County Heritage Rail Trail located at the rear of the building. The “Freight Room” has photos & documents of the history of Serenity Station. From the Maryland state line to Seven Valleys it is 11 miles. The outside garden houses entertainment on Friday & Saturday nights through October 16th.

I had two appointments in Wrightsville, which was an easy 30-minute drive. The weather was perfect with sun and temperatures in the high 70’s so I spent most of the time talking to owner Jim Miller at his Moon Dancer Vineyards & Winery on his patio listening to a jazz trio and looking at the Susquehanna River. He had another band performing that night. Dinner was at John Wright Restaurant along the same Susquehanna River. You can see the remains of the civil war era historic Wrightsville Bridge while you dine outdoors. The Union Army blew up the bridge so the Confederate Army had to move the long way, by land. The John Wright Company specializes in cast iron products for the home & garden, selling shelf brackets, fireplace and woodstove accessories, Christmas tree stands and more. It is worthwhile strolling through the store before, or after your meals.

My last morning was spent at Allegro Vineyards where co-owner Carl Helrich spoke about his choice to make wine and skip the entertainment opportunities at the winery. He does sell his wine at 5 other company owned outlets in the region. Pennsylvania law allows up to 5 outside sales sources. The winery was founded in 1980 and Carl and his wife Kris Miller bought the property in 2000. It was an easy 4-hour drive back to New York City as once again the sun and temperature made for a lovely 3-day visit.