History-rich Rhodes and the Dodecanese Islands off Turkey’s southeastern coast offer some of the prettiest ports and most charming villages in the South Aegean Sea.

If you’d like to become a Rhodes scholar, researching the whitewashed homes and labyrinth alleyways of the largest island in the South Aegean up close and personal, consider a bike-boat tour of the idyllic Dodecanese Islands off the southeastern coast of Turkey. Blessed with a rich history and studded with dozens of Byzantine churches and medieval castles, this necklace of 12 larger and 150 smaller Greek islands boasts some of the prettiest ports and most charming villages in Greece. I had the pleasure of visiting a trio on an eight-day, seven-night “South Greek Aegean by Bike and Boat” adventure in May 2009. 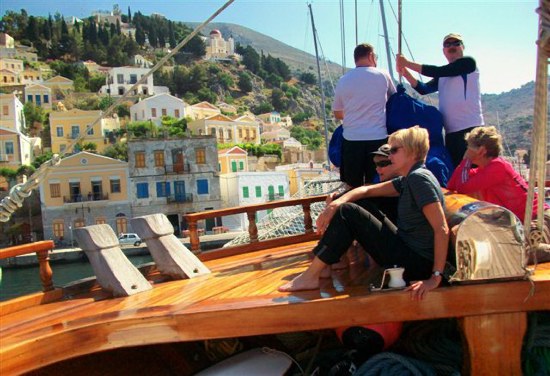 After flying to Dalaman, Turkey and transferring to the port of Marmaris, I boarded the luxurious Bahriyeli, a three-masted motorized sailing yacht with gleaming woodwork, decks cushioned with lounging mats, and a spacious outdoor dining area. Inside, the comfortable ship sports an elegant salon and full bar on its main level. Downstairs, 12 roomy cabins with ample baths accommodate up to 24 passengers.

For the next week, I shared the 145-foot Bahriyeli with 11 likable cyclists: three retired and near-retired American pairs who convene annually for cycling vacations, a young German couple from Hamburg and three singles from Germany ranging from their mid-20s to 60 and beyond in age. For this trip designed for cyclists in good physical condition, all arrived with a solid base of riding experience, ready to climb the hills our itinerary promised.

With genial Ali Sonay, a sultan-like Turk with a contagious joie de vivre and a love of bike touring as our capable guide, we set out each day on 21-gear trekking bikes outfitted with comfortable touring saddles and panniers for carrying water, jackets, snacks and souvenirs. While challenging, our daily rides rewarded us with views of idyllic bays rimmed with white sand beaches, tiny Greek towns and ancient monuments offering evidence of turbulent histories marked by successive invasions and dominations. Indeed, if the landmarks we encountered could talk, they would surely have recounted tales of great battles and wars that stretch back thousands of years before the birth of Christ.

In English and German, Ali filled us in on the legends and history of a picturesque archipelago once ruled by Alexander the Great, where the Macedonian, Byzantine and Ottoman Empires collided centuries ago. At our first stop, tiny Symi, we learned about the divers who contributed to the island’s once flourishing sponge trade, at its height in the 14th century when shipping and ship building also were thriving.

After saddling up and checking out how our bikes fit, we headed for Symi town, riding along the turquoise bay by a Byzantine monastery before starting our ascent past tier upon tier of white and pastel-hued Neoclassical houses. At its apex, the paved road affords a breathtaking view of Symi’s stunning harbor below.

We turned our bikes around here and returned to sea level to refuel with Mythos beer at a taverna set on the ivory sand of the isle named after the nymph Symi, who married Poseidon, god of the sea. That evening, a group of us climbed some 500 steps to the island’s highest point and hand-picked our dinners in a local taverna, pointing to dishes prepared with goat, calamari, octopus and fresh Mediterranean produce.

Our first trek was typical, in terms of topography, of what lay ahead. Because sea-level harbors often anchor more interesting scenery above, nearly every ride began with a demanding climb leading to a panorama overlooking red tile roofs and sapphire inlets. Averaging 25 miles (40 kilometers) through hilly to mountainous terrain, most ended with endorphin-inspiring downhills to our floating home moored in the harbor where we would spend the night. Back at the ship, we relaxed, swan, socialized over cocktails and shopped in town for local treasures.

On this half-board trip, our daily meals included a hearty breakfast and one hot repast prepared by our inspired on-board chef. Enroute, we stopped at local cafés to refuel with salads, grilled fish and other Mediterranean specialties.

Our second ride was challenging, for we climbed the steep road leading to the Stephanos crater on the volcanic island of Nisyros. Situated between Kos and Tilos, the mountainous isle was formed, according to Greek mythology, when Poseidon cut off a part of Kos during a battle between gods and earthly Goliaths and threw it onto the giant Polybotes to stop him from escaping. Pinning Polybotes under its weight, the land mass became Nisyros, according to legend.

Today the conical-shaped island is a peaceful place largely undisturbed by tourists, with white cubic houses draping its dark, volcanic earth. Since Polybotes is still mythically pinned underneath, his sighs and groans explain the steaming sulfur springs of the still active volcano. At the plateau of Lakki, we climbed down steps leading into the island’s crater and walked on its hot, layered surface, feeling like a troop of Neil Armstrongs arriving on the moon.

From Nisyros, a six-hour crossing took us to Rhodes, largest of the Dodecanese islands in both size and population, where a medieval Old Town has been declared a World Heritage Site. At the hillside village of Lindos, we explored the birthplace of Chares of Lindos, creator of the Colossus of Rhodes, one of the Seven Wonders of the Ancient World. For 56 years, the 107-foot statue straddled Rhodes’ Mandraki Harbor before it snapped at the knees when an earthquake hit in 226 BC.

With its mixture of Gothic, Byzantine and middle Eastern architecture and its elaborate stone carvings framing doorways and windows, Lindos has a well-preserved sense of antiquity. Adding to its charm are ever-present donkey trains ready to carry tourists to the island’s acropolis high above the sea.

From Lindos, we rode south on Rhodes to the cerulean bay of Plimiri, where our ship was moored. Another ride took us through forests and villages, past the party resort of Faliraki to Rhodes City, where we pedaled along medieval walls to Mandraki Harbor to meet the Bahriyeli. Our final ride was up to Rhodes’ acropolis with its ancient columns and sanctuary of Apollo, through remains of the medieval town within the Old City walls. Descending to Mandraki Port, where statues of a male and female deer guard the harbor of the 2,400-year-old island, we concluded our riding adventure. 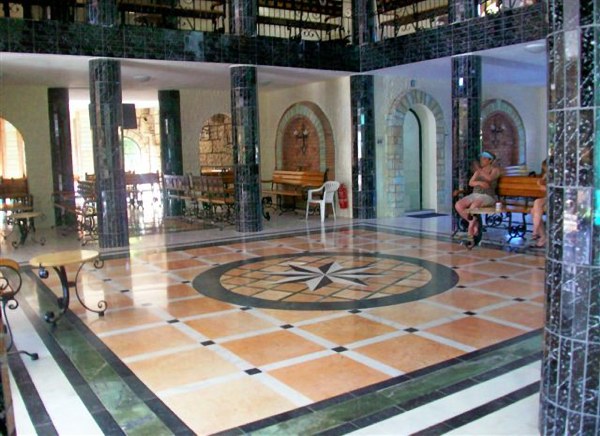 After sailing back to Marmaris, our group decided to celebrate our week together at a local haman—a Turkish bath. At this not-to-miss cleansing and relaxation ritual, we stepped into a dry sauna where we sweated out toxins and reminisced about island pleasures. A wet sauna in a mosaic shrine followed, then an exfoliating scrub and oil massage. After lowering the temp with a cold shower, we amped it up again in a warm Jacuzzi where we relaxed sipping watermelon slushies. A total body massage concluded our ritual. Aaaaaaahhh… higher education never felt so good.

The “South Greek Aegean by Bike and Boat” is offered by Inselhüpfen (Island Hopping), a firm based in Kostanz, Germany, that specializes in guided and self-guided tours combining the active pleasures of bicycle touring with the relaxation of luxury yacht cruising. They are represented in North America by BikeToursDirect, a one-stop resource for European bike tours. The Tennessee-based company doesn’t organize its own tours but represents more than 40 Europe-based bike tour companies with 200 excursions throughout Europe.

Getting There
From LAX, Air France, American, British Airways, Delta, Lufthansa, Turkish Airlines and United offer connecting service (change of plane) to Dalaman and Izmir, Turkey. Alternatively, book a lower cost flight to a hub city in Europe and fly Pegasus or another budget European airline to Dalaman or Izmir.