Quebec City celebrated its 400th Anniversary in 2008. Capital of the province of Quebec, it is in this unique city where French civilization first took hold in Canada. UNESCO in 1985 designated Quebec City a World Heritage Site. From Carnaval-the largest winter carnival in the world, to the Quebec City Summer Festival, there is every reason for the city celebrations to party on!

Quebec City, in Canada’s largest province, Quebec, is North America’s only walled city with nearly five kilometers of stone walls from 1690. Massive archways and fortification encircle the historic section of the city – Old Quebec City. The only thing old-fashioned about the city is the sense of security in walking the cobblestoned streets from the 17th and 18th centuries. The city was built atop a steep rocky bluff overlooking the St. Lawrence River in hopes of dissuading invaders by sea or by land. Even after walled fortification, the city fell in 1759 during the Seven Years’ War on the Plains of Abraham where the armies of Montcalm and Wolfe fought to the death. Lord Dufferin, governor general in the 1870s, proclaimed the walls that surround Old Quebec not to be dismantled but retained, cementing to this day the city as one of the world’s most popular European-style cultural attractions.

Old Quebec City is divided between Upper Town and Lower Town. Around almost every corner of the narrow streets is a sophisticated sidewalk café and delectable restaurant. Museums and nightlife coexist. Both areas are serviced by complimentary tourist shuttle buses. Another way to access both of these historic areas is to take a ride on the funicular that operates on rails at an angle of 45 degrees between the two street levels. To get to the funiculaire in Lower Town use the 16, rue du Petit-Champlain entrance-near Place-Royale. Place Royale is the oldest historical district dating from the 17th and 18th centuries. This area eventually leads to the historic Port area, Musee de la Civilisation (with an open rooftop garden ideal for both adults and children) as well as other museums and attractions. The ferry to Levi is here. In Upper Town, the entrance to the funiculaire is on the Dufferin Terrace overlooking the St. Lawrence River near the Fairmont Le Chateau Frontenac. The Fairmont Le Chateau Frontenac offers one of the best vantage points for viewing the St. Lawrence. Certain sections of ground near the hotel are under archeological excavation with free tours offered. 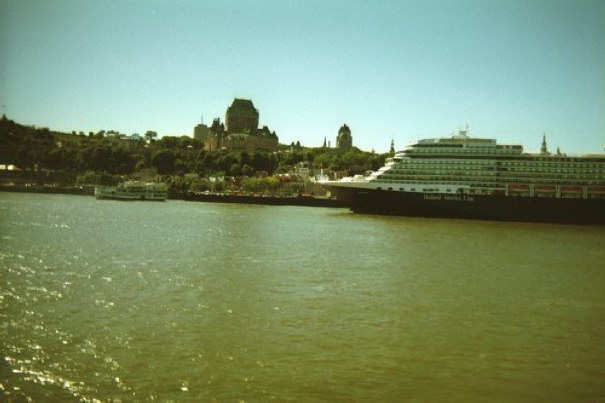 One of the best examples of a fortification archway is from St-Louis Gate in Upper Town. Behind the fortification is the recreation of Quebec’s 400-year history. Museums offer multimedia exhibitions, artifacts, historical monuments, live interpretative centers and a model city built to scale. If you want to see how the military high brass enjoyed their meals you’ll see a beautiful dining room table set with lovely china, silver and glass. The morning I toured the fortification freshly baked bread samples were offered. The aroma was delicious. Spectacular views of the St. Lawrence River where now luxury cruise ships dock and of the surrounding architectural gems may be viewed along the paths from the ramparts. The Citadelle du Quebec is close to the St-Louis Gate area and offers guided tours. This area offers an old French powder magazine (1750) and a former military prison (1840) and changing of the guard daily from June 24 to September.

A great place to make home base is hotel Manoir Victoria, within the walled city, and about a ten minute stroll along narrow café-lined streets to the St-Louis Gate. Take a horse-drawn carriage through the Gate if you prefer. The tourist shuttle bus is just across the street from the hotel; but the area around Manoir Victoria is perfect for long walks up and down gently sloping streets, shopping, and sightseeing. Jean-Lesage International Airport is 13 kilometres. Befitting an historic city, the hotel dates from the early 1830’s. Millions of dollars have been spent in renovations. In the spacious lobby you’ll see large armoires, plush leather sofas, paintings on high-ceiling walls and an out-of-the way backstreet entrance to Le Saint-James bistro open until 1: am weekends. The hotel has indoor parking, fine dining, business centre, spa, indoor pool and sauna, free wireless high speed Internet access in the room, and what I like best- room service. I enjoyed in the hotel’s dining room a Quebec-style breakfast…dark brown maple-syrup infused beans, luscious fresh fruits and local cheeses, croissant, eggs to order, and bacon. The area is quiet, ideal for family visits, solo travelers, and honeymooners.

June to September for the next four years The Image Mill visual projection performance takes hold of the Port area in Lower Town once night falls. The free performance set to avant-garde music against a canvas of towering cement silos on the waterfront is the brainchild of artists extraordinaire Robert Lepage and Ex Machina. A ten minute bus ride from the Port area to the trendy Saint Roch district is the Cirque du Soleil street performance held Wednesday to Sunday evenings during the summer. The performance is a colossal extravaganza of costumed street performers heralded by sound effects and lights show as they make their way throughout the streets beneath the Dufferin Montmorency highway underpass to a huge stage. Children and adults gather on a grassy knoll to watch the 90-minute spectacle. I was spellbound for the entire performance.

Hotel Pur, a contemporary boutique hotel ten minutes’ walk from Dufferin Montmorency, was ideal for taking in the Cirque show. Conde Nast Traveller listed Pur in their 2009 Hot List. This place is full of twenty-something travellers, the neighbourhood trendy and full of affordable and hip restaurants, lively cafes, shopping, a movie house, and public bus stop around the corner from the hotel. Contemporary minimalistic-styled room, free Internet in the hotel lobby and free gourmet coffee from a high-tech machine to serve your java just the way you like it, 24-7! I enjoyed gourmet French pastry, fresh fruits, croissant, cheeses and delicious coffee bedside for breakfast before hitting the fitness centre with pool. Great hotel for a girlfriend’s getaway.

Old Quebec City is truly a remarkable city-and walkable. Quebec architects made use of their fine sense of line and appreciation of the city’s founding fathers in modern application for heritage buildings. People live, work and enjoy life in the old quarter and welcome visitors with open arms. Permanent and travelling exhibitions in the city’s large and small museums you will see nowhere else make a visit to Old Quebec City a cherished lesson in history.

Note: The city of Montreal, Quebec is a few hours’ from Quebec City. One or two days in each city makes for a wonderful cultural experience. The Fairmont Queen Elizabeth hotel is adjacent the VIA train terminal in Montreal. I find this glamorous hotel ideal for a quick shopping/sightseeing sojourn in the city. Everything is at your fingertips when at the Fairmont. I walked from my hotel along Rene-Levesque Blvd West through the downtown business section towards Mont-Royal where you’ll find a huge park area and McGill University nearby. In September when I visited the area was full of excitement with students finding their way around the university grounds perhaps for the first time. After McGill I walked to Sherbrooke Street West, a major cross street. I had a quick pedicure at Spa-Eastman’s city location before visiting various churches and museums. It felt so good to have my tired feet massaged. Tip: the view of downtown Montreal from the spa is fabulous. The Montreal Museum of Fine Arts is on Sherbrooke Street West. Until August 29, 2010 there is the story of how Cirque du Soleil inspired the House of Boucheron to create a collection of luxury jewellery. Toe ring anyone?