There are few experiences in this short life that can rejuvenate your soul like being covered in whale snot. It is like being blessed with Nature’s holy water. And to think I didn’t know about this special experience or how close and easy it was to have it! In the USA there are laws which keep humans at a certain distance from these magical creatures, but in Mexico they have found a way to let you bask and pet and snuggle and learn and love these magical animals without hurting them. I’m talking about the Gray whale breeding ground in Baja Mexico. There are three lagoons on the Pacific side of Baja; Guerrero Negro, San Ignacio and Magdalena where the whales come to breed and give birth every year between December and April. There are a few ways to get to these places; most
people rent a car either at the border in San Diego, California, and drive south or fly to Cabo San Lucas and drive north. We went the road less travelled. Flying to San Diego, we caught the Flyer bus, # 992 which you catch right outside the airport terminal. The bus will drop you off at the trolley on “C” street and you catch the blue line to San Ysidro. It is an interesting ride with an overview of San Diego culture such as the mural proclaiming All American pride and glory next to the “bail bonds” sign. The trolley ends at the border with Mexico and you just get off and
walk across a bridge to Tijuana. There were no guards or customs and it was a bit disconcerting to enter another country so easily! 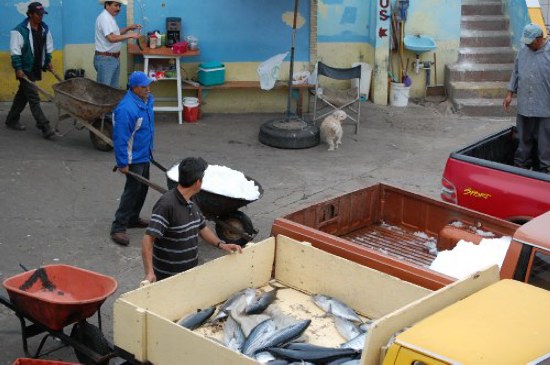 A short block and a half walk gets you to the ABC (Autotransportes de Baja California) bus terminal. Here, for about $10 U.S. dollars (they will take either dollars or pesos) you can get to Ensenada. The buses are comfortable, clean (except for the bathroom) and show dubbed American movies that I really wouldn’t want to see in any language. But, it is a quick hour and a half and voila, you are in Ensenada. There are many hotels, but we chose the Hotel Ritz which was on the corner of 4th and Ruiz, an easy walk to the waterfront. Our room was about $35 U.S. and we had a lovely balcony looking over the city. A huge balcony really, but the funny thing was, there were no chairs! I guess that is extra. The staff spoke English and were wonderfully helpful. We walked around the harbor in Ensenada and ate fish tacos at Lupitas right on the waterfront watching the fishermen bring in the days catch. 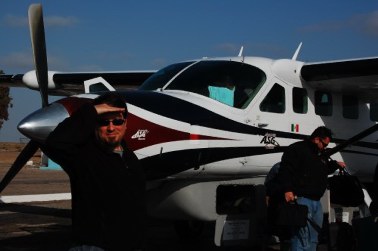 We had come in to Ensenada to spend the night with the plan to catch a small plane down to Guerrero Negro the next day. The small plane company is Aero Servicio Guerrero and they only fly on Mondays, Wednesdays and Fridays (about $240 round trip). We took a taxi to the military airport early Friday morning and thoroughly enjoyed our four hour delay watching the goings on of military base local transport life. I had been in phone contact with the small plane business and felt like family with Carmen and Ruben after arranging our flights. They are used to locals only and were wonderfully trusting that we would show up to pay since they did not have an international billing system in place. They checked and weighed every passengers luggage which still seemed like an incredible amount to fit on such a small plane! There were boxes and boxes of medications, food, suitcases and even a satellite dish! There were 13 passengers and this made my superstitious mind a bit nervous until I realized the pilot would make 14. The small plane was quite an adventure as we were so low and close to the mountains kissed by clouds on one side and the ocean breakers right below. The plane pauses at Isla Cedros briefly before making its final approach to Guerrero Negro. The entire flight time is about one and a half hours, and the view and exhilaration and intimate contact with the pilot checking his cell phone was just another part of the adventure, and we weren’t even there yet! The scenes below were extraordinary with the ripples of sand dunes and the winding entrance to the famous Scammons Lagoon, also known as Ojo de Liebre (eye of the jackrabbit). 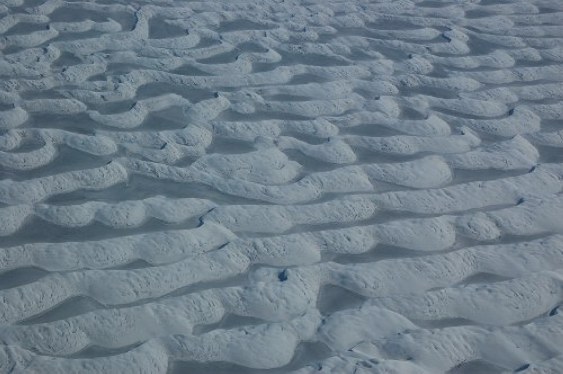 Landing at another military air base we easily caught the one and only taxi there to take us into town. They must have known we were coming because everyone else was local! Mostly enormous firemen! Again I wondered about our weight limits. We had made reservations with Mallarimo, touted as the best motel, restaurant and whale tour company in Guerrero Negro. This town is a one road desert and cactus village with no stop lights to speak of. A few businesses, one bank, taco stands and of course, whale tours because that is all there is to do here! There is a salt mining company and we learned that they supply at least 25% of the world’s salt. There are also the sand
dunes and the migratory birds. But it is the whales that draw the crowds. 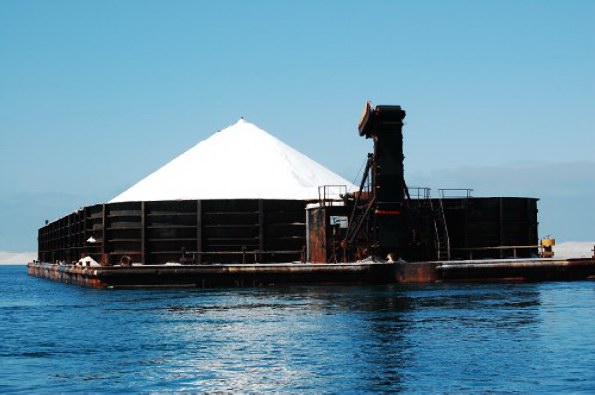 Our motel was lovely, quaint and comfortable. I had packed summer clothing with bathing suits and sarongs only to realize that here it is usually cool and windy so we ended up wearing our traveling jeans and fleece the entire weekend! Again the staff spoke English and were gracious and helpful. It is one stop shopping here at Mallarimo
so we barely ever left our motel grounds. On Saturday we left early for our pre-booked tour to see the whales. Arturo, our guide was well versed in history and science and covered it all on the drive to the bay. We boarded our pangas (small motor boats) to head out to the lagoon to find some whales or let them find us. The Mexican
government long ago realized that the money was in the tourism by protecting this lagoon and its yearly visitors. We met people who come every year to experience this phenomenon.

The boat ride out to the lagoon takes about 20 minutes passing lovely white undulating dunes, tug boats pulling barges piled high with salt, migratory birds and sea lions. The boat drivers are on their radios with the other 3 boats to keep each other notified of whale sightings. We were seeing lots of whale blows on the horizon or even
close by. We saw lots of whales up close, mostly a mother with her baby. The whales breed here but earlier in the season. By now, March, most of the males were already heading back up north to Alaska. We also saw a lot of dolphins. And toward the end of the afternoon we were gifted with a breaching whale! It was spectacular! This whale, right off the bow of our tiny boat leapt out of the water a total of 13 times in a row! But, no whale came close enough to touch. And I was rather disappointed. 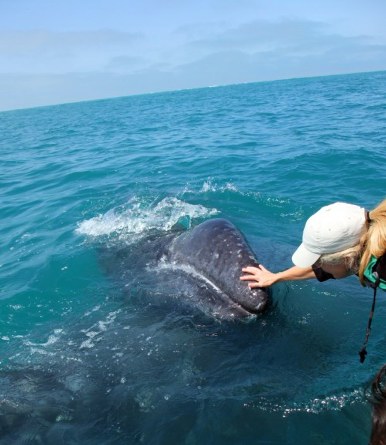 So, when we got back to the dock I simply boarded the next tour boat, and thank goodness I did. Wow. Wow, wow, wow. We ended up at a rather shallow part of the lagoon and the whales, two mothers with their babies started to play with us. Evidently they like the sound of the motor and they want to scratch on the engine and the bottom of the boat! Amazingly the mothers would encourage their young to come up to the boat and let us touch them! Then the mothers would come for a good
scratch of their barnacles! I was hysterical with joy! We were being snorted on, tail flipped, noses up by the boat side for kisses, for nearly an hour! At some point I realized I was crying.

We spent the next day on two more tours to see the whales, both trips equally gratifying. And I have come away from this experience even more dedicated to the preservation of the beautiful, diverse wildlife of this planet. The human species must come to realize how very blessed and lucky we are to share this tiny speck of a planet with such gentle amazing creatures. Our brains and our thumbs must figure out a way to live harmoniously with the rest of Nature. We must speak out against the senseless slaughter, for example in Japan (please see the award winning documentary The Cove). We must live smaller and more sensibly. We must control our population and reckless use of our resources. I know the planet will survive, but will we? And I know that I do not want to inhabit a planet where all one sees is cement, strip malls, SUV’s , trash and smog. We say we are the superior species. then let us act like it. Whatever your culture, whatever your religion we must have one thing in common, and that is to worship and save this very, very special place.

Oh yes, and getting home, we took an even smaller plane, then the bus and of course the border crossing into the U.S. was much more complicated! So we hired a van to get us to the front of the line and then on to the airport. They didn’t even question the bags of salt we brought back, which I must admit looked a bit suspicious.