Combine the great history-building legacy of Jean Baptiste Lemy, first Catholic Archbishop of Santa Fe, New Mexico, with all the amenities of an outstanding resort, and you have the remarkable and lovely Bishop’s Lodge, located just three miles north of New Mexico’s intriguing 400-year-old capital city.

Situated in the colorful foothills of the Sangre de Cristo Mountains, the lodge and Santa Fe itself offer much that is appealing to visitors from around the world. The city, of course, has a plethora of shops, art galleries and museums, as well as some phenomenal historical buildings, including the famous Palace of the Governors on the plaza and the San Miguel Mission, both built in 1610 when Santa Fe was founded and both the oldest of their kinds of buildings in the country. Another famous landmark is the famed Loretto Chapel with its “Miraculous Staircase.”

Founded in 1852, the chapel at Bishop’s Lodge was originally established by then Bishop Lemy who had come from France to establish a mission in the area and who found the site of the chapel and the lodge to be a retreat from the world. He later became New Mexico’s first Archbishop and was immortalized in Willa Cather’s classic novel, Death Comes for the Archbishop. Bishop Lemy was also responsible for building the huge Cathedral Basilica of St. Francis of Assisi in the heart of Santa Fe. 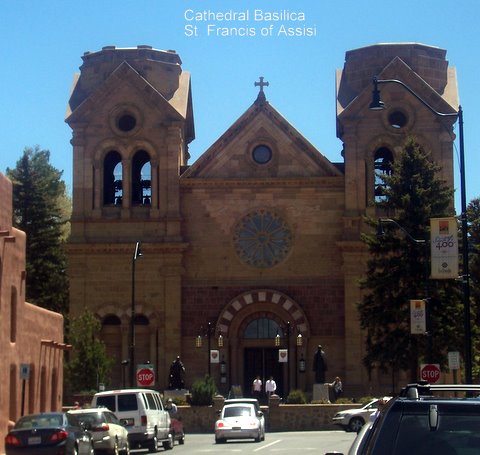 Following the Archbishop’s death, the lodge property eventually came into the possession of family members of the famous Pulitzer publishing company and later other owners, and over the years 15 lodges were added, housing 111 unique rooms. The lodge now draws guests from all over the world wishing to see the original little chapel on site, as well as the surrounding scenery.

Activities at the resort include horseback riding, complete with wranglers to train and assist beginners, as well as more advanced riders, a large heated pool, a spa, fitness center, skeet and trap shooting, hiking, lawn games, a kids’ club, and team-building workshops for groups.

Chef Carmen Rodriquez, meanwhile, offers up some excellent cuisine, and we found the entire staff welcoming and helpful.

Two of our eight-year-old granddaughters took the opportunity to learn about horseback riding from Matylda and Kendall, two charming wranglers employed at the lodge. What a great time the little girls had learning to groom their mounts as well as ride them. One of them excitedly said, “This isn’t just cool; it’s awesome!” 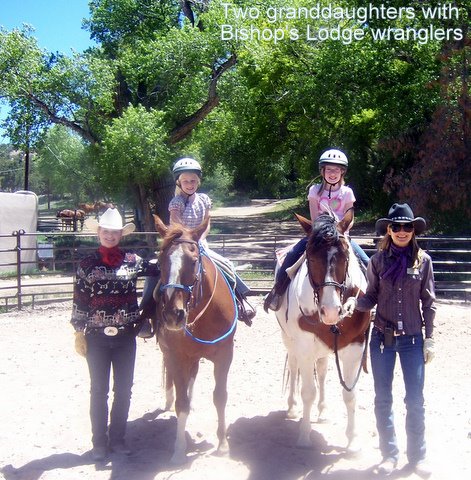 During our stay in Santa Fe, we spent two nights at Bishop’s Lodge and another two nights at the charming Inn on the Alameda located just a few blocks from the city-center plaza—a quiet, relaxing oasis nestled in the midst of the hustle and bustle of this major tourist destination. This property is extremely well-appointed and well-maintained and offers an outstanding, deluxe continental breakfast, as well as an afternoon wine and cheese reception. (www.innonthealameda.com)

If you happen to fly into Albuquerque on your way to Santa Fe, be sure to avail yourself of the fabulous Sandia Peak Ski and Tramway in the beautiful Cibola National Forest. Just 25 minutes from the airport, this is the world’s longest aerial tramway at 2.7 miles with an 11,000 square mile panoramic view.