Our travel by bus from Delhi to Jaipur was slow because of the condition of the road and having to navigate through many small towns along the way that were crowded with people, trucks, buses, cars, motorcycles, bicycles, and cows. But this gave us our first look at the real living conditions for a majority of the people of India outside the main cities like Delhi and Mumbai. Our SmarTours guide Arvind helped to enjoy the long trip by entertaining us with historical as well as cultural facts and pointing out the key points of interest we passed.

We made a rest and lunch stop at a roadside restaurant, which served us at tables in a large outdoor garden area. We were introduced to and enjoyed Indian samosas (deep-fried pastry triangles filled with spiced vegetables), pukuras, and Indian Kingfisher beer. It gave us a chance to become better acquainted with the other members of our tour group and was the beginning of friendships that have lasted throughout and after the trip. The ancient Arable Mountains were in view, but they are unimpressive, low hills. These mountains are said to be some of the oldest mountains on earth. 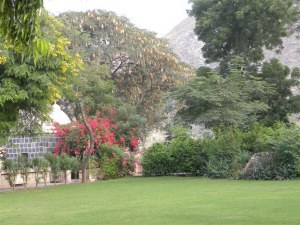 At one point our bus driver pulled to the side of the road for us to see camel farm. The delighted herdsmen gathered the camels in our direction as we snapped pictures and, of course, indicated that we should pay them for the photographs. Getting paid to allow a picture to be taken is a key way for a great many of the poor of India to make money. Later that afternoon before reaching Jaipur the bus again pulled over for some panhandlers in the form of a large group of monkeys standing on a wall beside the road with palms extended. This was quite a sight to see these rhesus monkeys begging for food from passing vehicles. The government had relocated them because they were invading Jaipur houses in gangs. Some of our group threw chips to the monkeys, who ate and fought over these morsels, revealing the dominant males who patrolled their sections of the wall.

On reaching Jaipur in the state of Rahjastan, a city of a little over 2.6 million people, we checked into the Golden Tulip Hotel. After dinner Arvind took anyone interested to a nearby Hindu temple to see a communal prayer ritual. Crossing the busy street was frightening! After taking off our shoes, we entered the temple where we were greeted, welcomed, and allowed to view the service as well as take pictures. The members of a family had prepared the main altar of flowers, food morsels and burning incense, and a young man in a white robe and saffron colored sash proceeded to the various altars around the walls of the temple, lighting candles and uncovering the various sculpted god figures. Three men sat on the floor with musical instruments and began playing music as more and more people entered the temple and the service began. The communal prayer ritual involved chanting of mantras, singing, clapping hands, and the ringing a large bell. The ceremony was focused on praising. 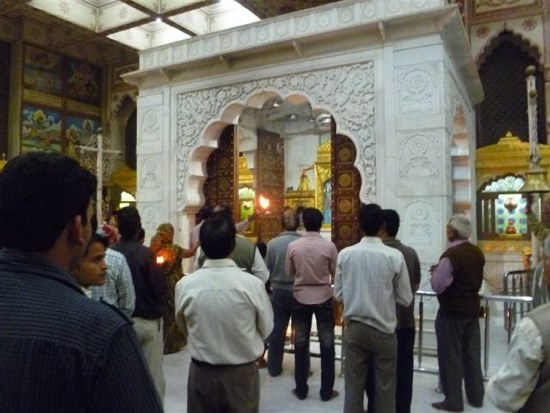 The next morning we set out for our excursion to the Amber Fort. On our way we passed Hawa Mahal or “Palace of the Winds” in the Old City. The Hawa Mahal is a five-store pink colored, delicately cut sandstone building of shuttered windows that had allowed the women of the Palace of the past to view the city activities without being seen. Jaipur is known as the pink city because of the pink color of the sandstone structures of the Old City. 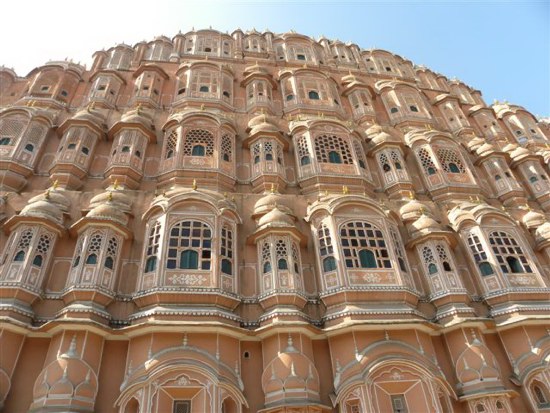 Traveling out of Jaipur to the north, we came to some rugged hills and the town of Amber, the ancient capital of Rahjastan up until 1728. The Amber Fort was begun in 1592 by a Maharaja Man Singh, a commander in the army of the famous ruler Akbar. We lined up in pairs to climb to the platform from which we perched ourselves on the wooden seat on back of an elephant and enjoyed a long, bumpy ride up the steep ramp into the Amber Fort. The Fort and Palace cover a large area with the walls of the fortification circling far out through the rugged mountains, resembling the Great Wall of China. The grandeur of the distant past of the Maharajas can well be experienced in these surroundings. 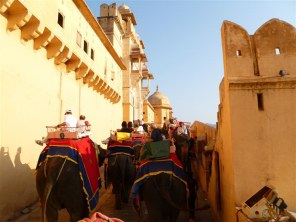 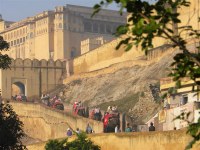 In the afternoon we had a bicycle rickshaw ride through the snarling traffic of Jaipur’s Old City. The ride is not for the faint of heart as our rickshaw bicycle driver guided us frighteningly close in and out of motorcycles, cars, buses, trucks and other rickshaws, pedaling vigorously in order to keep up with the movement of the vehicles all around us. We circled throughout the Old City, passing the huge, elaborate gates in the ancient walls and merging with the oncoming traffic at various roundabouts. When we got down from our perch on the rickshaw and caught our breath, we took off walking to explore the bazaar with all the colorful shops, but within minutes of starting our walk we were besieged by shopkeepers and street vendors thrusting various items in our face and demanding we buy or come into their shop. 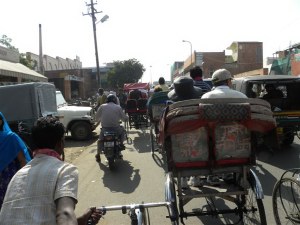 After another comfortable night in the hotel Golden Tulip and a large breakfast buffet, we set out on our bus ride to the city of Agra, to complete our tour of the golden triangle of Delhi, Jaipur, and Agra. After a couple of hours we stopped to tour a Fatehpur Sikri. This was once a magnificent fortified ancient city and capital of the Mughal Empire between 1571 and 1585, during the period of the powerful Emperor Akbar. Akbar built three palaces here, one for his Hindu wife, one for his Muslim wife, and one for his Christian wife. The capital had to be abandoned when there were severe water shortages. This is a well preserved World Heritage Site and well worth spending some time visiting.

We arrived at the hotel Jaypee Palace in Agra just before suppertime. This magnificent hotel had long marble floored corridors and entry ways, acres of grounds, gardens and walkways surrounded by a large wall, a large swimming pool and several excellent restaurants as well as a spa and workout room. The luxury and comfort of such a place was in such a contrast to the living conditions of the rest of the Indian population that we had a difficult time believing we were in the same country in which we had been traveling throughout the day. Even though the tour was only through its fourth day, we had seen so many sights and been exposed to so much of India’s culture we could not help feeling we had been traveling for twice that time. 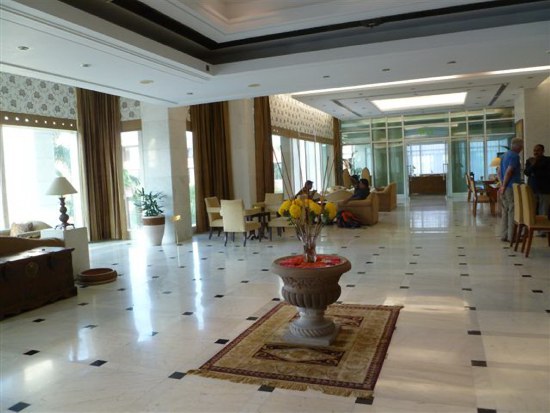 The next morning was our time to visit the world famous Taj Mahal. Having seen pictures of this famous Wonder of the World over and over through the years , I felt that seeing it in person could not be more than being able to say that I had been there. But when I actually moved through the large arch of the entrance gate building and stared out at the gleaming, white marble structure, I could not suppress the awe I felt. This is not just another pretty building. This is truly a huge piece of art built by the Mughal Emperor Shahjehan in 1630 to enshrine mortal remains of his favorite wife and queen, Mumtaz Mahal’s. I was entranced at the perfect symmetry and balance achieved in this work of art, not to speak of the artistry of the inlaid designs of semi-precious stones and the bas-relief sculpted into the walls. The Taj Mahl took 22 years and some 20,000 workers to complete, and six years before its completion, the Emperor Shahjehan was imprisoned in Fort Agra for the rest of his life for spending so much of the state’s money on building this and other buildings. He was only able to view this masterpiece from over a half mile’s distance away. He is buried in the Taj Mahal along with the wife for which it was built. 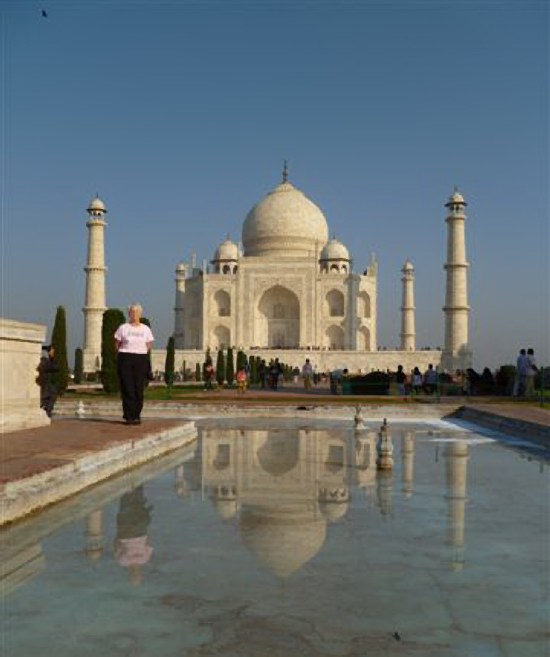 After leaving the Taj Mahl, we traveled to Fort Agra that stands along the Yamuna River as does the Taj Mahl. Fort Agra is one of the finest Mughal forts. Emperor Akbar began building this fort in 1565. You should not miss visiting this after seeing the Taj Mahl. Fort Agra figures into key moments in the history of India from the time of Akbar down to India’s occupation by the British. Viewing back along the river while standing on the Fort Palace’s balcony we were touched by the thoughts of Emperor Shahjehan standing there and only able to view the far distant Taj Mahl, his life masterpiece.

Here in Agra is the only place in the world where intaglio (cut stone inlaid into marble) work is done in this way, and the artisans’ method has been handed down from father to son for sixteen generations. We went to the artisans’ workshop and saw a video of the famous Murana Mines, where the hardest marble in the world has been mined for centuries by hand. Today there is some mechanization but it is still backbreaking work. Next we went across to the intaglio workshop where the young men, who have learned from their father’s trade how to do this, were working. It was both amazing to see and broke our hearts because these boys begin as children and by late thirties have completely crippled their arm and shoulder and fingers, which grow huge calluses, and they have to stop working. Then what means of support do they have, with no medical or social help from the government?

After a lunch of delicious Indian curry in a downtown eatery, Bonnie and I walked to an indoor mall a block away. The mall was two-stories and resembled malls in the US in the 1970s. We encourntered one interesting aspect. I was wearing a backpack and Bonnie was carrying her purse, and when we started into a large grocery store, we had to put purse and backpack into a clear plastic bag that zipped up and padlocked and was only unlocked for us to get our possessions out when we exited the store. This had to mean shoplifting was a big problem.

We returned to our luxurious Jaypee Palace Hotel in a three-wheel motorized rickshaw tuk-tuk, which is supposed to carry two passengers plus the driver but was often seen with whole families crammed into the passenger seat. Our driver dropped us at the gate, and the guards checked our hotel key to be sure we were hotel guests before letting us through the gate. We spent the rest of the afternoon relaxing in the restful setting of the hotel gardens in preparation for our travel by bus and then train to Khajuraho the next day. Read more about India in our April issue.