On the Italian Riviera is the Cinque Terre. Isolated, feared, romantic, for centuries untouched by the world and held in awe by all who have traversed the ancient Sentiero Azzurro (narrow footpath) which links the five (cinque) remote villages of Monterosso, Vernazza, Corniglia, Manarola and Rio Maggiore. With views that boggle the mind, lush foliage, a narrow path hundreds of feet above seas crashing onto the rocky shore, tiny plots of vineyards and olive trees clinging to the cliff face is where we began an unforseen adventure. 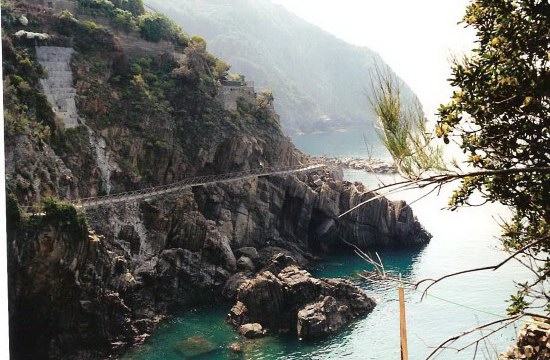 Starting our journey north from the southern most town, Rio Maggiore, we found a wide path broad enough to allow two people to walk hand-in-hand. This is the only section of the seven-mile coastline path that offers a guard rail. We had read that this section was known as the Via dell’Amore (Lover’s Lane). There were many stone benches where lovers sit and do what lovers do. The viewer is literally overwhelmed by the multiple shades of the blue Ligurian Sea, a huge variety of different rock formations, exquisite flowers plus the extraordinary beauty of this isolated paradise.

We soon reached Manarola, the smallest of all of the Cinque Terre towns which has been a popular resort for more than 700 years. Stopping for coffee, Marianne stated her apprehension of what was ahead as she is afraid of heights. We went on. I was surprised at the level of difficulty on this second leg, more formidable than imagined. As the degree of difficulty became more intense, Marianne began to tremble with fear. Mustering all of her strength, she followed step, after arduous step.

We continued to move slowly, carefully stepping over the rocky terrain. She was overcome with fear and too frightened to look down the face of the cliff walls to the seas crashing against the rocks hundreds of feet below. Horrified at the thought of falling, the hair on her arms was standing on end. She was stunned and trembling. There were no guard rails to protect her from tumbling down into oblivion. We continued on a twisting and turning path that, in places, was barely 24-inches wide. Marianne froze when she realized that I disappeared from her view. “Where are you?” she screamed out in awe-struck terror.

Though she could not see me, I said, “Honey, there is just a little turn here. I just wanted to see what was ahead.” I turned back to the three tiny path steps leading down in the middle of a 75 degree turn hugging the cliff face.

Seeing the blind turn she panicked. Quivering, paralyzed against the wall, soaked in perspiration, desperate, shuddering, totally petrified, “Why did you bring me to this place? We could fall off this cliff and die and no one would ever know it. Don’t leave me here! I cannot move. Please help me!”

Climbing up the very small, twisting rock steps to the sharp turn, I was aware from her panic-stricken voice she was only a few feet away. “I‘m right here. Stay facing the wall. Don’t look down. Don’t look anywhere except directly in front of you. I am going to reach around and place my hand on top of your wrist to get a hold on you. Follow my directions. Trust me. I don’t want to lose you. We will get you safely through this.”

Placing my hand firmly around her left wrist I said, “I’m just two steps away from you. Move your left leg out slowly, about six inches. Good. Hold onto to the wall with both hands. The next step is directly below your foot. Just a bit more and you will touch the step. Put all of your weight on your right leg. Don’t move your left leg. Bend your right knee. Easy. A little lower. Perfect. Bring both feet together. Now rest for a moment.”

An eternity of two minutes elapsed. Marianne was drenched in perspiration. “You can feel the edge of the step by slowly moving your left foot a little more to your left. Now move it forward just a little and bend your right knee. Keep your left leg straight. OK, your foot is on the step so slowly start putting weight onto your left foot. Don’t look down. Good! Now slide your body along the rock moving slowly to your left. Put all or most of your weight onto the left foot as you move around to your left. Bring your right leg alongside the left leg. Stand straight leaning against the cliff without looking down. Good. We’re almost there.”

Marianne panting, dripping in sweat, shivering, shaking with fear, stopped for a moment to catch her breath. I moved my hand from her wrist and placed it around her hip as she was too far above me to do otherwise. “Hold it there for a moment. Take some deep breaths. I’ve got a good grip on you. Don’t worry. Only one more step to go.”

“Oh Honey, I’m not so scared now. I know I can make it.” Trembling, she took the final step as I slipped my arms around her waist and brought her into my arms. She slumped against me, completely exhausted, soaked through to her skin and started to cry once again, only this time the crying was from relief.

A few steps later we reached a wider section and sat down. Marianne sucked in a big breathe of air and slowly released it. More composed, she looked out over the sea and smiled. “I didn’t realize how beautiful this place is. I’m so sorry for being a scaredy cat. I have never been so completely terrified in all of my life. Thank you for helping me.” After a 15 minute rest she said, “Let’s move on to the next town and take the train back to our hotel. I’ve had enough.”

I took her hand and led slowly step-by-step. Fortunately they were not far from Corniglia . The narrow path swept downhill, widening. We could see the railroad tracks below. In a few more minutes we were on level ground that led to a stairway. All that was left of this journey was to go down about 20 steps with a handrail and on to the train platform and wait for the train. The Cinque Terre will never be forgotten.