Mike Miller, Cathy Dawson and I spent nineteen days on a mission trip to Basa village in Nepal in mid November through early December. We trekked to the remote village in the Nepal Himalayas to help initiate a hydroelectric project for a community that has never had electricity. The villagers cook and heat their homes with wood-burning fire pits. The villagers suffer health problems from inhaling smoke each day, and the nearby mountain forest is threatened from wood cutting. Indianapolis First Friends Quaker Meeting sponsored our successful fund raising project. So, we were able to purchase two hydroelectric generators for the village.

We rode in a bus with our crew of porters, kitchen staff and guides, along with the hydroelectric equipment, from Kathmandu to the end of the road in Jiri. While the 250 lbs. of equipment was carried on the backs of porters direct to Basa, we took a circuitous route through the mountains to enjoy trekking the middle Himalayas in the Solu region.

In Basa, Mike, a retired electrical engineer, and I met with the local project engineer, Chandra Nepal. With the village leaders, we inspected the waterfall-fed stream, which will serve as the hydro-power source for the electricity generator. Mike reviewed the plan with Chandra for construction of a small directional dam and power station and for stringing wire from the power station to the village. Mike was satisfied that the plans are sound and he was impressed with Chandra’s practical approach to the difficulties of creating electricity in such a remote area.

A major concern, however, was that only one generator was delivered to Basa. We had contracted for two. The problem was resolved at a meeting back in Kathmandu with representatives of Techno Village Co. (the supplier of the generator equipment). It was interesting to participate in a business meeting with company representatives and the board of the Basa Village Foundation NGO. The meeting started with tea and the utmost civility. However, voices began to rise, and eventually I had to demand that the Company and NGO reps explain in English to Mike and me the problems and commit to a solution. The explanation we received was that only one generator was in stock and the second was to be available for transport to Basa within three weeks. Because the Company reps are high caste Brahmins and the NGO members are from the lower caste Rai people, who are farmers, there were some communication problems and distrust. However, the problems were resolevd and the second generator was transported to Basa three weeks later.

The water site is a beautiful waterfall/stream a rigorous 20 minute hike from the village. The only effects on the environment will be: 1) a little dam that will help the water flow narrow at a natural funnel to maximize flow into a pipe during dry season (winter); 2) a cistern and shelter for the generator; and 3) poles within the village to lift wires up to the homes. The plan is to pin the wire to a rock wall along the waterfall and then string wire underground up to the village to minimize the number of poles needed.

While the equipment is owned by the Basa Village Foundation NGO, the system will be run and operated by a village co-op. Two village-wide meetings were held while we were in Basa, and there was great enthusiasm for the project within the village. A “code of conduct” was agreed to by the villagers as to the provision of labor by the village to construct and maintain the system, as well as a sliding scale for villagers to contribute financially for an initial buy-in and then monthly maintenance of the system. It is anticipated that construction will be completed by early summer. So, I hope when I return to Basa in the fall I will see lights in the village.

The system will provide very modest electricity to the 62 homes in the village. Each home will only have enough power for the equivalent of about 4 low-wattage light bulbs. But the villagers don’t have TVs or high-power appliances. They just want to be able to see around their homes at night without burning wood or kerosene.

Cathy, Mike and I had a fun and challenging trek to Basa. The high and low point for me was climbing 14,000 ft. Pike (Peekay) Peak. I scurried up to the top solo, got lost coming down and had an adventure fighting my way through heavy underbrush, a rhododendrun and pine forest, and sliding down a frozen waterfall. I came down the wrong side of the mountain, because it was covered in a cloud allowing me about twenty feet visibility and I got disoriented. The trail I was following at the base of Pike was washed out by an avalanche. As night fall was fast approaching and I was beginning to look for shelter to survive the night, I found a boot print I recognized and was able to make it back to camp. Our sirdar, Ganesh Rai, and 4 of our crew were still up on the mountain. looking for me.

Next morning Ganesh, Mike and I hiked back to the top and had spectacular views of the Everest massif and other 8,000 meter peaks along the Nepal-Tibet border. Photography was a challenge with 40 mph winds. As we neared Basa, we were met by the village musicians, who piped and drummed us into the village. The villagers showered us with flowers, and matrons pushed cups of rakshi (home-brewed spirits) into our hands. During our three days in Basa we visited many homes as well as the school. The students performed traditional Rai dances for us.

Cathy’s experience as a teacher and massage therapist were put to good use. While we trekked, she worked daily with two of our porter-students to improve their English. She gave the less shy members of our crew massages for sore muscles, and delighted the 70-year old wife of the Lama of Gaur with a first in a lifetime massage. In Basa she taught the kids rhyming and clap/slap games to aid their English acquisition.

We also distributed shoes to all of the guys in our crew and some of their children courtesy of First Friends. I delivered some materials for the school, including bookmarks made by kids in Hamilton County Juvenile Detention Center. And I gave the student dancers Beanie Babies.
Another favorite memory of the trek is sitting with our crew by a campfire under the huge starlit sky with white-capped mountains looming across huge and deep valleys. One night Ganesh and Buddiraj Rai, the assistant guide, told me the stories of their Rai forefathers and the unique customs and rites of the Khaling Rai.

Lastly, I’ll forever admire Mike Miller’s “slow but sure” approach to trekking at age 71. He made camp timely everyday and had the energy to hike up Pike and shoot photos in tearing wind and cold. And he has the technical knowledge to have helped the local engineer and Basa Village Foundation NGO to refine the plan for the hydroelectric system.

Back in Kathmandu we enjoyed the quiet of the Nirvana Garden Hotel, but hung out at the Kathmandu Guest House for social life. Friend Uttam Phuyal, manager of the KGH, introduced us to several other philanthro-trekkers. Over milk tea and beers we shared ideas about service projects in Nepal and travel adventures. Our own adventure ended with a feast at Niru Rai’s house the HQ of Adventure GeoTreks, the expedition company which took such good care of us on the trek. 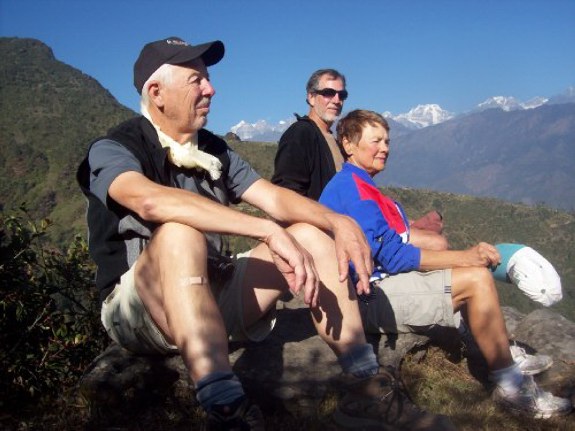