Fernando Llort called himself an artistic artisan because he
combined his vibrant, almost Picasso-like art with artisanship. I
discovered Llort’ s art in El Salvador’s capital city of San Salvador
and in the town of La Palma two hours north. The bonus was that La
Palma’s location in the mountains near the border with Honduras is also
the perfect place to relax and enjoy a peaceful vacation.

In the capital city of San Salvador, Fernando Llort ‘s gallery, El Arbol
de Dios, showcases his collection of paintings, drawings and other works.
His designs are based on simple lines and pure, bold colors. The themes
come from nature and the dignity of work, his daughter Maria told me as
she guided me through the gallery. He saw that hands represent the
dignity of human work. Hands held to the sky praise all nature and God.
He represents his deep faith in God with crosses. Religion is life
its elf to him, Maria told me. And eyes represent the idea that God
sees everything, and the flora and fauna in the paintings show how he
glorifies God.

El Salvador suffered through a 12-year civil war. When the war ended in
1992 the Catholic Church asked Llort to design the tile facade for the
Metropolitan Cathedral of the Holy Savior (Catedral Metropolitana de San
Salvador) in San Salvador. He considered it his most important work ever
because it was a tribute to God. The cathedral was visited twice by Pope
John Paul II. On the second visit Llort gave him a stole on which he had
painted a depiction of Jesus at the Last Supper.

Two hours north of the busy capital city is La Palma, a place Llort
considered magical and his family home and a museum of his life is
there. The decorated walls of the streets and buildings with their vivid
colors and clearly defined shapes announce the unique art and artisanship
of the town which is now the number one tourist destination in El
Salvador. 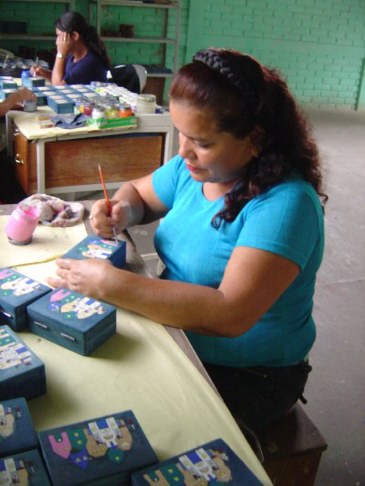 As a young man there, Llort realized the people had few ways of making a
living. Wanting to help them, he started by teaching ten people who
possessed artisans’ sensibilities to draw figures and animals in his
artistic style. More and more came to his house to learn and his heart was
touched by their desire, Maria said. He created designs for the women to
put into embroidery. Others had only leather or wood to work with, and so
he designed for all their materials. Always he wanted to teach
people, his daughter Maria said.

In small houses throughout the mountains surrounding La Palma and in
houses and shops all over the town, individuals and families do the
piecework to make the crosses, key chains, boxes, toys, blouses,
tablecloths and more displayed in over 60 open-door shops through town. In
back rooms I watched some of the workers doing the piecework it takes to
produce the art and craft of La Palma.

All the products are based on the style taught by Fernando Llort in the
1970s. Basic themes ” red roofs, white houses, people engaged in work,
nature, praise, church ” are iconic to the artist and thus to the town
and El Salvador itself. However, tourism and exporting have created change
and the artists and artisans of La Palma now add more details to a basic
shape ” an armadillo painted on the side of a box I bought is in shades
of purples and has intricate lines to show its scaly body.
Year by year, El Salvador rebounds from its past history of war. Today it
is a country almost daily adding services for tourist like the Hotel
Montana, a place to go to experience a unique Latin culture and,
especially, the art of Fernando Llort.