You’re a photographer for a big city newspaper, with the chance of a front page photo. Would you change an image to make it more dramatic? Intervene in the photo? Alter the truth? This is one of several ethics questions faced by real newspeople posed by one of the many interactive exhibits at the new Newseum, recently reopened in Washington, DC, after a hiatus of six years.

Cited as a “technological marvel,” the Newseum presents five centuries of news history over 7 floors, 14 galleries, 15 theaters and 130 hands-on exhibits with the focus on the story behind the stories, where how news is made and how it is reported is itself the big news. Try your hand at being a reporter. There’s a big story breaking at the circus. During an animal rights protest, someone let all the animals out of their cages. A protest leader is being held for questioning. You know what happened, when and where. Your assignment is to find out who did it, how and why. And you need to file the story before the competition.

You decide who to question and what questions to ask. You negotiate between opinion, fact and spin. After interviewing a protester, police officer, circus owner, and several members of the circus, I determined that the clown had a definite motive and was indeed the culprit. I came away with a new respect for how hard it is not only to get the story, but to get it right. But alas, I picked the wrong headline to accompany it. Good thing I’m actually a journalist and not an editor! 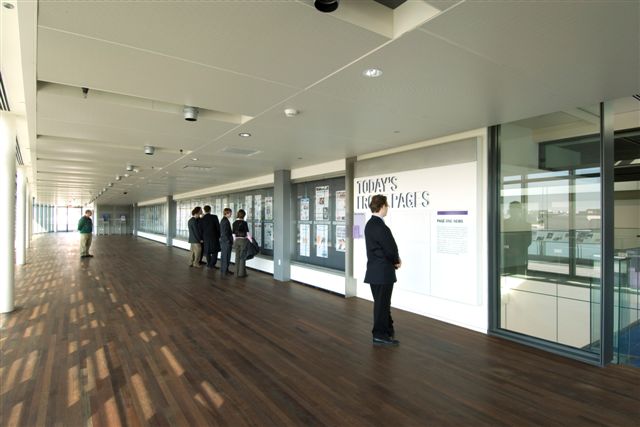 Those who dream of working in front of the camera may be videotaped reporting a late-breaking story from the White House, Supreme Court or Newseum. Read from a teleprompter or speak extemporaneously, just like the pros. You even get to practice a bit before “reporting live.” Once home, you can download a video of your TV debut from the Newseum website.

Bothered by ethics issues and the media? Explore a series of questions — Should the Unabomber Manifesto have been published? Was it more important to protect Arthur Ashe’s privacy or to disclose he had AIDS? Is it okay to sneak prohibited items thru airport security for a story? No right or wrong here — usually — just the everyday moral dilemmas that journalists face all the time. You make the call — and then see how you fare against the general public as well as journalists. The discrepancy was not as great as I would have thought, but the news reporters, not surprisingly, are a tad more likely to bend the truth.

But the Newseum is not just about news; it’s about life. This is the first real-time museum where what is happening is what is happening. It honors the past and celebrates the present. For the older generation, it’s their history. For the younger, it’s their future. (ELVIS! HIS GROUNDBREAKING, HIP-SHAKING, NEWSMAKING STORY) Where were you when Neil Armstrong landed on the moon or when Kennedy was shot or when you first heard about the Oklahoma bombing? These very public moments become very private memories. You’re not just watching history; you’re re-living it. Seeing the actual Berlin Wall brings that era alive in a palpable way no news story can. Viewing part of the severely melted and mangled antenna from one of the towers demolished on 9/11 causes a visceral reaction you didn’t think you were still capable of. 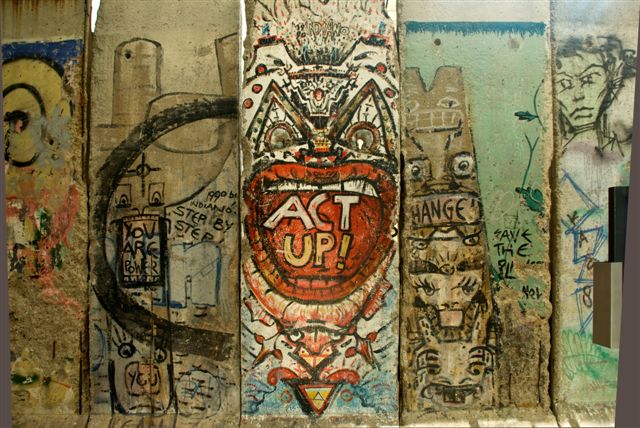 As Irving Black from Rangeley, ME, observed: “At most museums you just stand and look at pictures or things. Here, you’re an integral part of the experience.” The display of every Pulitzer Prize-winning photo since the award was first presented in 1942 is reason enough to visit the Newseum. Some may be images you’ve seen over time; others you’ve never seen before but which now may take up permanent residence in your mind’s eye. “No matter how hard it is to look at these images, we find it even harder to look away,” reads one of the many truths splattered upon Newseum walls. But there are as many photos which are joyous and life affirming as are disturbing or unsettling.

But if you need some comic relief, check out the bathrooms — and be prepared to spend an even longer time in there than usual. Since newspapers often qualify as bathroom reading, I was not surprised to find the walls — and stalls — in the Newseum restrooms graffitied with amusing headlines. Among my favorite bathroom bloopers: “He Found God at End of His Rope,” “Never Withhold Herpes Infection From Loved One,” and “Dishonesty Policy Voted in By Senate.” You just may be tempted to hit the bathrooms on every floor.

Of course, the history of news dissemination itself is traced from smoke signals and drumbeats through the high-tech promises of the next millennium. Among items on display in the News History Gallery are a printed version of Columbus’ letter to Queen Isabella discussing the New World he’d just discovered; Thomas Paine’s writing kit and a 1792 edition of his Common Sense pamphlet; a page from the original Gutenberg Bible; Mark Twain’s pipe, and Ernie Pyle’s typewriter.

Heather Helten, an 8th-grader visiting from LA, not surprisingly pronounced the experience “Awesome! I’ve never seen anything like it. I’ve learned things I’ve never known before like about the Holocaust and O.J. Simpson and the KKK. It’s like a huge wake-up call.” At the 4-D movie, which is much more intense than your usual IMAX, I felt I was actually in the film. I was gliding through a printing press like a sheet of newsprint. When a pitcher of water overflowed, I got wet. And I was pretty sure when a rat fled across the screen, it brushed against my leg. The screams emanating from the audience indicated others did, too.

To bring history even more alive, visitors relive the world’s greatest hits through a vivid multi-media experience that combines video, original headlines, photos and broadcasts. Remember Edward R. Murrow’s immortal “You are There” series? Well, you can be there again! Real-time happenings from around the world are displayed on a 40′ x 22′ hi-def screen, while their printed equivalents are recorded on the front pages of more than 80 newspapers. Check out how the same events are depicted differently, depending upon the emphasis or bias of particular newspapers. 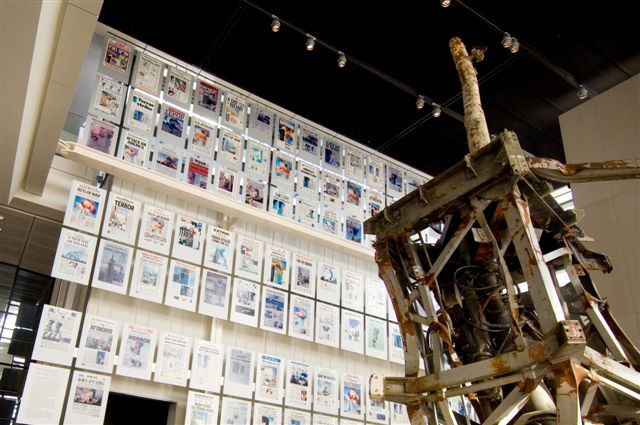 As to journalistic foibles and faux pas, exhibits and videos interspersed throughout the Newseum hold the media accountable for stories written in error, whether inadvertently or intentional. The good news is there’s so much to see; the bad news is there’s so much to see. The museum is massive. Like a big-city Sunday newspaper, it takes a lot of time to get through it all. After checking out the orientation film, start at the top and spiral your way down. That is if you can tear yourself away from the spectacular real-life view of the Capitol.

Like all museum tours, you end up in the gift shop. Think of it as finishing up with the funnies. Who can resist a coffee mug that reads ”I Love the Smell of Newsprint in the Morning,” a button that warns “Not tonight, dear, I have a deadline,” a 9-piece plastic “paparazzi” playset or cufflinks and earrings made from antique typewriter keys. The Newseum is fun, educational and personally relevant. Visitors come away with a new respect for what goes into making and distributing news and a better understanding of why it’s not perfect. And bear in mind: “If You Don’t Want It Printed, Don’t Let It Happen” (Aspen Daily News).