That morning in Botswana played out as if it was a tightly-edited film sequence. Our group of five was in a Range Rover on a rough dirt road. Our guides, Dix and Simon, from Mapula Camp, were out on the road examining fresh lion footprints. They figured lions were close by and decided to look further.

We drove on. Suddenly we spotted two large male lions. The guides were familiar with these two and said they were brothers out hunting. They were living away from their pride, Dix said, because they were more than likely not ready to challenge the older dominant leader.

When we came close, they were starting to cross a pond, all the while ignoring us, some 10 yards away. We followed, our Rover going unfazed through the tall brush. All of a sudden, the brothers came upon a flock of Egyptian geese, and we saw one snatch a goose from the air with lion claws.

He calmly sat down, proceeding to eat it. The other looked on – the bird evidently was too small to share. After a half-hour, he finished his snack, and the two went on with us behind. Up ahead, beyond the lions, we spotted a herd of zebras. Around 30 yards from the herd, the two stopped behind a bush, intensely observing them.

Meanwhile, four giraffes approached from the right. Immediately, one lion began moving toward the herd from the back. The zebras seemed distracted by the giraffes. This gave the lion the moment needed to attack from behind.

In a split second, we saw a big zebra attempt furiously to shake the lion off his back. The brother rushed in, and the two subdued and killed their prey – but not without the zebra struggling valiantly. We observed transfixed – both excited and appalled by the carnage. 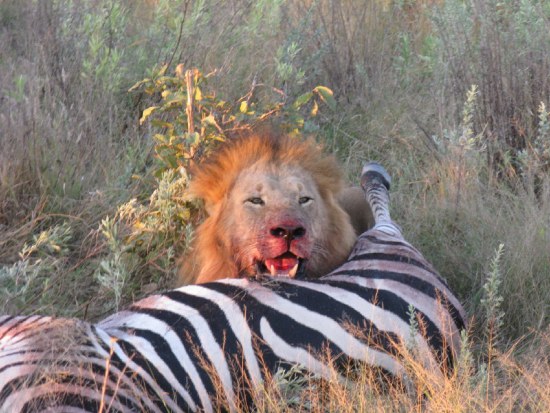 My wife and I had arrived in Botswana five days earlier and were flown by a small airplane to our first destination, Kalahari Desert Camp. This was to be followed by stays at Delta Camp and Mapula.

Our Kalahari visit started auspiciously when, during our landing, a Cheetah loped down the runway in pursuit of an oryx – a good omen for things to come.

The Kalahari is unlike most deserts. There are trees, scrub brush and tall grass. There is not much water to see, but water holes exist throughout.

There was no “roughing it” in our tent camp. It contained the comforts of home, as did all accommodations during our Botswana stay. At Kalahari the rooms featured an outdoor bath; bathing in the evening while looking at a galaxy of stars was a memorable experience.

According to our guide, Shaka, because this park is not heavily visited, the wildlife is somewhat shy. It takes sleuthing to find animals, and he was a good detective. First day he found a leopard in a tree, apparently surveying the horizon for prey. We parked a few yards away. We observed him for nearly an hour, following his movement from branch to branch. Finally, he must have spotted something when he sprang to the ground running, disappearing in the brush.

With this sighting, we had seen two of the three big cats in less than two days. (The lions were to come later in the week.) On our Kalahari drives, we encountered herds of wildebeests, impala, kudu, springbok, as we would in all the spots we visited. Africa is also a birders’ paradise. Everyday we saw an array of colorful birds and fowl – rollers, kingfishers, secretary birds, spoonbills, and the list goes on.

Going back to camp that first evening we caught a sight of a rare aardwolf, which elated Shaka, who had never seen one. It was an intriguing animal, bigger than a fox with a heavy multi-colored coat.

During our second afternoon, Shaka took us to the remains of an ancient Bushmen camp. These native people, nomadic hunter-gatherers, have lived in the Kalahari for 20,000 years. In modern times most have been moved to cities and government settlements in central Kalahari. For centuries they moved about, staying in igloo-shaped huts made from local materials – the frame bent branches, the roof thatched with long grass. All that is left are weathered frames.

Bushmen and the Kalahari itself became well-publicized in the internationally popular 1980 film “The Gods Must Be Crazy.” It dealt with a Bushman who found a Coke bottle in the middle of the desert and thought it must be an omen from the gods.

Our stay here was short, but quite comfortable. Our tent was large, with two beds and all the amenities one needs. At 5:30 a.m., Shaka would wake us so we’d have time for a light breakfast at 6 before heading out on our morning game drive. Returning at 11, we were served brunch, consisting of eggs, salads, freshly baked breads and an entree. At 4 p.m., we were served a light snack to keep us from getting hungry while on the evening drive. Dinner was waiting when we returned several hours later. This daily routine would be much the same at all three camps. The food was always hearty and quite good.

Next day we were flown to Delta Camp in the Okavango Delta for our next two days. It is the world’s largest inland delta, formed where the Okavango River empties onto a swamp in an enclosed basin in the Northern Kalahari. Most of this water is lost to evaporation and transpiration instead of draining into a sea. We found this one of the most beautiful spots in the world – water everywhere, intensely green marshes with water lilies, flowers and reeds, small lakes and tree-filled islands.

All this vegetation nurtures an abundance of wildlife. In front of the lodge, hippopatamuses grazed in the shallows among tall grass and came on shore to feed at night. We fell asleep listening to their guttural purrs as they munched. Throughout the day, elephants could be seen, usually looming in the distance but sometimes near camp.

At the camp, we were taken on “game drives” in dug-out canoes (makoros). As our guide, TJ, poled us through the narrow waterways, he was always wary of getting too close to the hippos, particularly mothers with calves. Easily perturbed, they were ready to charge. 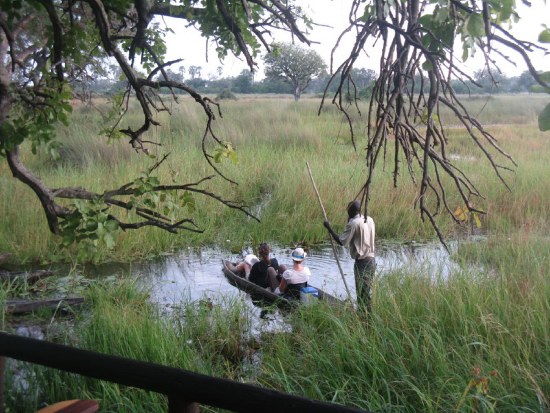 Each day, we went to one of many small islands for a hike – but not before TJ instructed us about what to do if we encountered a lion; we never saw one here. We often saw impalas and kudus, but most delightful was time spent with a mother warthog and her three progeny. The family ignored us, and we observed that their domestic dynamics was much like “home.” One offspring was a young piglet; the other two were adolescents. When mother turned her back to graze, the older ones would begin picking on the younger. When mother became aware of this, she would turn and angrily chase the trouble-makers away.

One afternoon, we were taken for a visit via makoro to a local village where a posse of dogs met us. I asked TJ if they were vulnerable to wild predators. He answered that, on the contrary, they protected the village people by barking at intruders. Here, houses were ingeniously made from termite hills, reportedly much stronger than cement. When pulverized and mixed with water, the material was used for the walls. About a third way up, beverage cans were inserted symmetrically in rows at the bottom. The open can end was turned inside for ventilation. It worked well, TJ said, and a wonderful way to recycle.

Delta Camp had one of the nicest lodges with a first class wine selection – on the house – and gourmet dinners. This camp was more luxurious, although still very basic. Our cabin had walls, but all window spaces were open, allowing the cool breeze and animal calls to flow through. Our “picture window” opened onto a large marsh where elephants enjoyed dining. On to Mapula for our final three days.

We returned to the kill site the next morning. The lions were still taking turns eating. One would eat, get his fill, then go a few feet to a pond for a drink and a rest under a tree. The other would take over for his share.

In the surrounding trees, buzzards gathered, waiting for the rotting remains. Hyenas had come over night to steal some meat, Dix said, but he could see by their prints that they had been driven off. Packs of Hyenas are notorious for snatching parts of kills from lionesses but were scared of the much larger males and could be easily driven away. In this case they would have to wait for bones to pick.

We had been in Africa before, in Kenya and Tanzania, and had seen most all the animals but had never seen a “kill.” In fact, Dix said that this was his first after four years of guiding. I guess our group was very fortunate.
The Moremi Game Reserve covers much of the eastern side of the Okavango Delta. It borders Chobe National Park and combines permanent water, with drier, heavily wooded areas, an excellent environment for all types of game The Range Rovers were great for traversing this terrain, equally viable plowing through three-feet deep water or crushing through heavy growth.
During our three days here, we saw families of elephants drifting by and herds of ostriches loping along. A great interlude was a show given us by a large assembly of about 100 baboons – youngsters leaping through branches (sometimes missing and crashing into tree trunks). Mothers showed off their babies; sisters groomed each other, and male potentates sat by sternly observing the proceedings.

Everyday at Mapula we looked forward to Sundowners and the spectacular sunset. On afternoon game drives, the Rovers pulled up about 6:30 when the sun was low on the horizon. Dix and Simon would open a cooler and serve our drink of choice, along with munchies. We would stretch our legs and take in the endless sky, watching the setting sun painting the clouds with swathes of gorgeous color.

A good cocktail spot was beside a pond where two hippos were leisurely lolling in the water. Voicing his disapproval of our invading his privacy, the bull opened his jaw wide and bellowed (a great photo opportunity for those quick with the camera).The best place, though, was our last evening in Botswana. It was near the lion kill. The fiery sundown framed a large acacia tree, and we could see vultures silhouetted in the branches patiently awaiting their share – part of the circle of life in Africa.