The cold wind pours in through the open windows of the bus, but its howl does nothing to overwhelm the non-stop parade of mariachi and reggaeton blasting through the speakers. It is three in the morning, and my friend Adam and I are on our way across Nicaragua to Big Corn Island, on the Caribbean Sea.

The Caribbean has long been one of the most highly-touristed areas on earth, and it is littered with islands that have become casualties of the mass-tourism juggernaut, marked by jaded locals, erosion of local culture and ridiculously over-priced services. We have embarked on the long overland trip to Big Corn Island in the hope of finding an island that exists outside the cliche of the Caribbean Island – a place that even in the travel-mania of the 21st century retains its soul as well as its beauty.

But first we have to get there – no easy task, if one chooses not to fly. The first step is a nine-hour overnight bus from the Nicaraguan capital, Managua, to the small village of El Rama, where we are shuffled in the pre-dawn darkness to a line of longboats, lashed together with rope. Life jackets are handed out while a preacher in baggy trousers screams fire and
brimstone from the dock. “Jesus is the way!” he shouts, drawing jagged lightning bolts in the air
with his hands while the entire boat listens intently with eyes closed and heads bowed.

The day is overcast, and, for tropical Nicaragua, absurdly cold. We are tired and in foul moods from the long bus trip, and we scowl at the jungled riverbank and the passing hulks of ancient fishing boats, until the rain starts pouring and a plastic tarpaulin is pulled over our heads. We put our heads in our laps, feeling the dribble of rainwater down our necks, and make a half-hearted attempt at sleep.

The longboat leaves us in the sketchy port town of Bluefields, named for the Dutch pirate Abraham Blauvelt, who haunted these waters some four hundred years ago. Nowadays, Bluefields has an appealing energy, but it’s decidedly disordered, gritty and sleazy – certainly no diamond in the rough. A long walk of the streets throws up not a single restaurant or cafe besides a few decrepit comedores selling second-hand shoes in a side cabinet beside the bain-marie. Our run-down hotel provides us with a towel, toilet paper, and a condom. We sleep fitfully through a night of bumps and squeaks and grunts from our neighbors and wake early to buy tickets on the once-weekly boat to Big Corn.

The boat is an old cargo ship packed out with people and goods. A pair of women sell food from tubs at the back of the boat. It rumbles through the water at a tooth-grinding pace, stopping for a full hour at the port of El Bluff while two Chinese sailors pound at the rust of their fishing boat with mallets, and a naval officer abruptly grabs our backpacks and searches them roughly.

We cheer as we finally pull out of the dock, but celebrations are short-lived. We hit the open ocean, and what follows is seven hours of lurching swells that crash over the bow, saturating us. The boat rises and falls, rises and falls, plummeting over the top of each wave sickeningly. A Dutch surfer begins to throw up over the side railing. People are queuing up to get inside to the bathroom. Again the day is overcast and cool, and now drenched, we sit in silence, holding ourselves and chattering our teeth. There is nothing to look at except a bleak borderless grey.

After forty-three hellish hours of travel, we arrive at Big Corn Island – and all fatigue and frustration drops away like so much unnecessary clothing. White sand and turquoise water stretch out in both directions. After years of travel in Australia, Asia and Central America, we’ve seen plenty of nice beaches, but little compares to this. The sand is like powder, and the water – well, it’s not as clear as glass; it’s as clear as air. Things in the water actually seem sharper than things outside it. 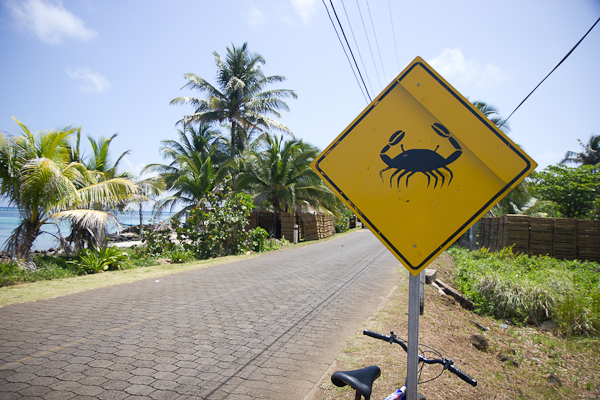 The biggest town on the island, Brig Bay (pop: 3,000), has the ambience of a small fishing village. The people are overwhelmingly friendly and welcoming, smiling big gold-toothed smiles as they join us in a glass of rum or a game of cards. Aside from a dive school, there is very little on the island specifically aimed at tourists, and we see only two other foreigners in four days on the island.

We eat satisfying breakfasts of gallo pinto (rice and beans) with eggs, and eat dinner in the smoke and dirt of shacks selling delicious skewers of barbecued pork. In the bars the islanders grind hypersexually to reggaeton hits with deceptively bored faces, while green laser lights sketch stars and squiggles across their bodies. For every second song the entire crowd sits down in their plastic chairs, and the bar is full of the wonderful murmur of the local Creole as glasses are clinked and downed. Then another song starts, everybody stands, and there is the intense silence of the grind.

During the hot and humid day we rent bicycles and cruise about the island, beach to beach, each more beautiful than the last. As we head south the road peters out into a dirt track which, in turn, peters out into undergrowth. With barking dogs at our heels we lift our bicycles onto our shoulders and lug them up a twisting goat path that ascends Quinn’s Hill, but at the top a man advises us to go no further – “Lots hijackers down dat way, man” – so we turn back towards the airfield, riding slow curves over the bumpy airstrip. Kids walking the runway home from school smile and wave until they disappear into the heat shimmers. 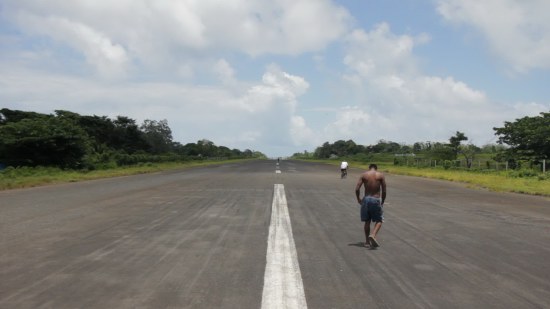 Towards the north of the island the beaches are strung thinly with drifts of dry-brown seaweed, banks of coral offshore forming restaurant-menu mazes in the ocean. Islanders slouch low in deck chairs outside their colorful wooden cottages. A spider monkey chained to a pole in a front yard runs crazed laps and scratches its back with the tip of its tail.

We dismount at Silver Sands Beach, planning to take a dip. The sand is deserted except for a beached speedboat. Before we can get in, a man with a great black shock of a beard emerges from a bush, smiling. “Havin’ yourselves a sun-bath?” he asks in his gentle Caribbean accent. “I only ask cos dis all my land. All mine. Dees trees, dis boat, dat sand, de water. It all mine.”
“Sorry,” says Adam, “We didn’t know. We can leave.” “Naw,” he laughs, “You all right. You jus’ havin’ yourselves a sun-bath. You no gon’ steal my engine.” He looks suddenly panicked, as if realizing he shouldn’t have mentioned the idea of stealing the boat’s engine. “Naw,” he says more confidently, chuckling as he walks away, “You no gon’ steal my engine.”

It is with hearts filled with equal parts regret and dread that we wander the dock of Brig Bay, several days later, to find a boat going back to Bluefields. The town is buzzing quietly with activity, and the sun is bursting over the glittering ocean. Big Corn had given us everything we had sought and more. Long-term travel can sometimes feel like a desperate scramble to find those few patches of land as-yet unplundered by the tourism industry – but here, with the comfortable barrier of forty-three hours of required bus travel or the cost of an airfare preventing most travelers from visiting, Nicaragua hosts a true gem. 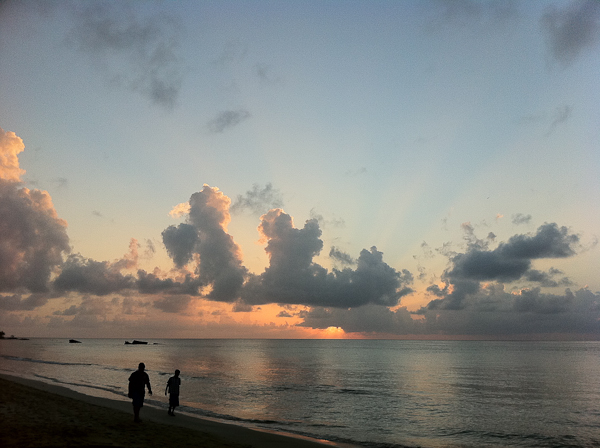 Next time, though, I think we’ll fly.