“Here lies W. C. Fields. I would rather be living in Philadelphia.” This was an epitaph Fields proposed for himself in a 1925 article in Vanity Fair. It refers to his long standing jokes about Philadelphia (his actual birthplace), and the grave being one place he might actually not prefer to be. This is often repeated as “On the whole, I’d rather be in Philadelphia.” It has also sometimes been distorted into a final dig at Philadelphia: “Last week, I went to Philadelphia, but it was closed.” William Penn founded the city in 1682 and named it Philadelphia, which is Greek for “brotherly love.” On the whole I really enjoyed my trip there, and when I visited, the city was open!
Please read along about my trip from New York City to Philadelphia in a whirlwind two-day tour. I traveled by public transportation and visited the sites most tourists get to. Donna Schorr, Director of Communications for the Greater Philadelphia Tourism Marketing Corporation, guided me. I took advantage of all the senior discounts I could find. There are 4 million people residing in the five-county region, making Philadelphia the fifth-largest city in the U.S. Ripoff Alert!- Amtrak’s one way senior fare from NYC to Philadelphia was $72.25. I went down there by Amtrak. Coming home I used SEPTA & New Jersey Transit. Total senior fare- $11.25. The Southeastern Pennsylvania Transportation Authority (SEPTA) operates various forms of public transit- bus, subway and elevated rail, commuter rail, light rail and electric trolley bus- that serves 3.9 million people in and around Philadelphia. I took their commuter rail to Trenton, New Jersey, and connected to NJ Transit into NYC’s Penn Station. It took me an extra 1/2-hour back home but I did save $61. Local buses cost me $2, plus $1 for transfers. It was over 96 degrees and it was worth the $2 to ride in air conditioned buses rather than walk the 8 blocks.

The PHLASH Trolley is a seasonable visitor trolley that loops throughout the city. It makes 27 stops from Penn’s Landing on the Delaware Waterfront to the Philadelphia Museum of Art area and is free for ages 65+. I used their services several times when they arrived before my Big Bus Tours. The same folks run the Philadelphia Trolley Works & the Big Bus Tours. They depart from Historic Downtown Philadelphia (5th & Market), and a 24-hour pass is $25 for ages 55+. I used their hop on and off feature for many of their 21 stops. The first day I rode the total route (1 1/2 hours) to orient myself to the city. I took great photos from the open-air top deck of the bus. They will also pick you up at your hotel.

A generation of 78 million strong, Baby Boomers travel more frequently than older and younger generations (I am 76 and past the BB timeline). I will note the attractions that offer a discount for seniors. I stayed at a delightful 48-room boutique hotel in the heart (Spruce at 12th St) of the Washington Square West neighborhood in Center City, The Alexander Inn. There is a 24-hour fitness center and e-mail center in the basement. A continental breakfast is served every morning and there are always fruit and snacks available. The staff was super helpful and the rates were very reasonable for the great location, $109-$139. If you are a AAA or AARP member, there is an additional 10% discount for Sunday and Monday stays. They are 6 blocks from the Historic District, 12 blocks from Museum Row and 2 blocks from the theatre district with shopping and food all around them. I ate across the street from the hotel at Tria Café, a small and casual restaurant specializing in food and wine pairings. My 4-course meal with one glass of wine cost less than $30. After dinner I walked a few blocks to have a gelato at Capogiro. This was a recommendation by Brian Friedman, a local wine and food writer. 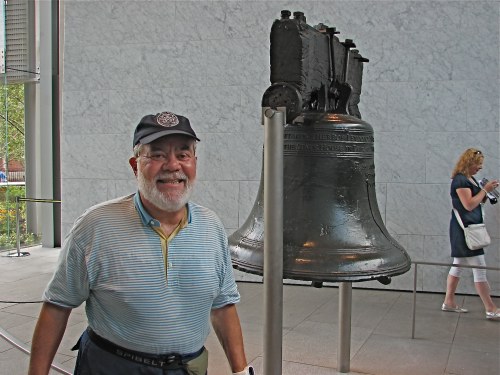 The first I will declare a Must See is the Independence Visitor Center- 6th and Market, across from the Liberty Bell. A block from the Bus/Trolley depot, this is the primary point of visitor orientation for the City of Philadelphia, the southern New Jersey waterfront and Bucks, Chester, Delaware and Montgomery Counties. There are information desks, hotel and restaurant reservation service, concierge assistance, exhibits and movies and a snack bar and gift shop. The cleanest public toilets in the city are located here. The Center is in the middle of the Independence National Park Mall, and you can pick up free tickets for Independence Hall and the Liberty Bell Center from one of the park rangers at the desk in the Center. If you are disabled they will allow you to cut the line at the Liberty Bell.

Figure on at least an hour for another must see, the National Constitution Center (behind the visitors center- discount). There is a 17-minute multimedia journey through the history of the Constitution from its inception thru today called “Freedom Rising.” Then walk through We The People, an interactive constitutional journey that tells the story of our most cherished document. Signers’ Hall has 42 life-sized bronze statues of the 39 delegates who signed the Constitution. Of course I posed with Alexander Hamilton, a fellow Columbia College graduate. I spent another hour at the National Museum of American Jewish History, a block away. This is a stunner (must see!) whether you are Jewish or not. The 100,000 square-foot glass and terra-cotta building opened in 2010 and is Smithsonian-affiliated. It is the only museum anywhere dedicated to chronicling the American Jewish experience.

If you have time you can walk a few blocks to Elfreth’s Alley at 2nd Street. It is the oldest continuously inhabited residential streets in the country, dating back to the early 18th century and is a National Historic Landmark. Around the corner is the Betsy Ross House. In 1876 the building was generally recognized as the place where Betsy Ross lived when she made the first American Flag. After you tour the small house, plan to spend some time relaxing in the shady courtyard where you’ll enjoy free family friendly programming, hear storytelling and see colonial crafters at work.

My second day was all about museum visits with a late lunch at another must see- Reading Terminal Market (across from the Convention Center) at 12th & Arch. Established in 1893 it is the nation’s oldest continuously operating farmers’ market. Family-run vendors sell almost every type of farm-fresh cuisine as well as prepared food. There is a section devoted to Lancaster County Amish merchants. There are also plants, flowers and cookware sold. I ate at DiNic’s and had their roast pork/pulled port sandwich.

Using my all day pass I took the Big Bus to Stop #9, The Eastern State Penitentiary Tour (discount!). I spent about 1 1/2 hours with the audio tour visiting the cell of Al Capone & Willie Sutton. It was operational from 1829 until 1971. The penitentiary refined the revolutionary system of separate incarceration, which emphasized principles of reform rather than punishment. When the building was erected, it was the largest and most expensive public structure ever constructed, becoming a model for more than 300 prisons worldwide. They even had a synagogue built for the Jewish prisoners. It is currently a U.S. National Historic Landmark.

I retuned to the bus stop and caught the Big Bus to Stop #10 at 12th & Market for the Philadelphia Museum of Art (discount!). As an aside, if you are in decent shape and the weather is not over 90 you could walk to all the sites mentioned in my two-day trip. The steps on the front of the Art Museum were made famous by the Rocky movies. I noticed many people running the stairs, just like Rocky Balboa. At the bottom of the stairs is the Rocky statue, which is actually a prop from one of the movies and a favorite site for a photo. The museum is the home to a remarkable collection of art. I especially enjoyed the arms and armor section. There is a free trolley to the annex, the Perelman Building across the street. A few blocks away is the Rodin Museum with the largest collection of his works outside of Paris. Please note that this museum will close September 6th for renovation and reinstallation. It will reopen in late Spring, 2012. 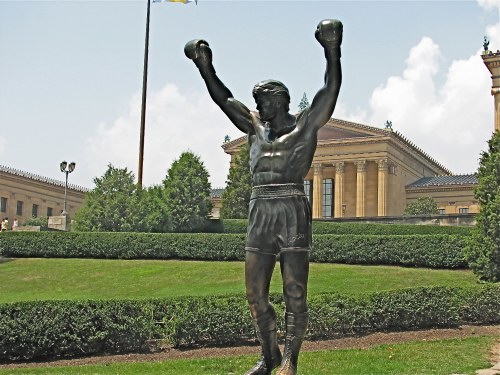 A few blocks from the Rodin Museum is The Franklin Institute (discount!). I took the free Splash trolley because it came along first. This is a wonderful science museum that was filled with kids when I visited. The newest Harry Potter movie is playing in their Imax Theater, and there was a special exhibit, Mummies of the World. I spent time at the Franklin Sports Challenge room learning the Science of Sports. As you walk or ride around the city keep an eye open for the more than 3,000 outdoor murals created by the Mural Arts Program. There are many tours that take you to view many of the murals. Remember, numbered streets run north and south and named streets (mostly tree names) run east and west.

It was time to pick up my bag at the Alexander Inn and take a local bus the 6 blocks to the Market East SEPTA station and my return trip to New York. Philadelphia, like New York, Boston and Chicago are walkable cities with the major attractions all accessible by public transportation. I plan on returning when the NY Yankees play the Phillies in the World Series.