Okay, take it now. I will admit that it is there for the taking. More, I will gladly give it to you. Indeed, if my “man card” is to be surrendered after an article such as this . . . take it! I’d rather have it forfeited than have someone later claim that, while in Portland, my visit to Voodoo donut (a Portland phenom) for a top-selling Bacon Maple Bar was somehow a pre-ploy to get that man card back (knowing full-well I would be writing an article largely about beautiful gardens and affable people.)

No, I will happily admit it. If stopping to “smell the roses” and various other Portland blooms with the girl of my dreams had come without the left over waft of pastry goodness coupled with maple and bacon, I would still have gladly deemed this trip to Portland one of my favorite short escapes ever. 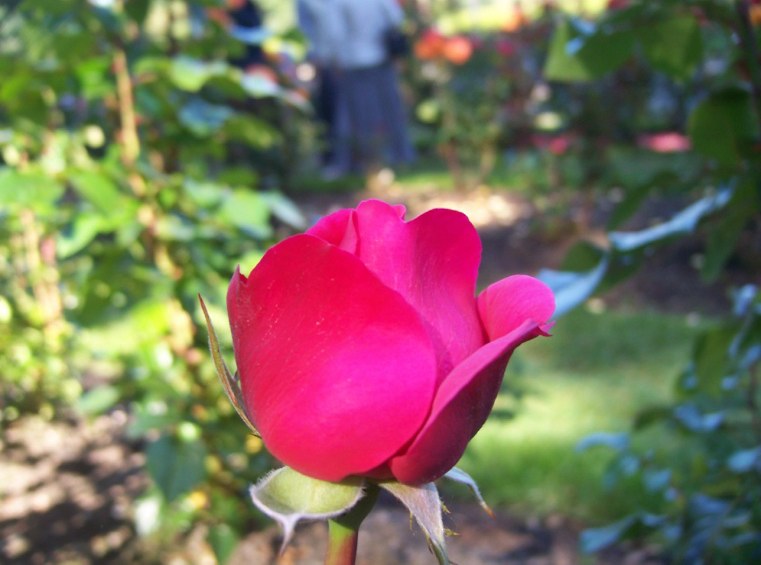 Maybe the women in my life are to be credited for a draw to blossoms. Could it have come from my mother who ensured several early childhood exposures to Butchart Garden’s http://www.butchartgardens.com just north of Portland and past the Canadian border? Or, possibly it arose from a talented artist of a grandmother? Perhaps from another grandmother’s style and grace as found in a daily simple, single rose afloat in a crystal bowl? Could this have even come from the hedge of roses or garden of a beloved mentor? All good precursors, yet this “exposure” trip to Portland with my wife and best friend, Brandi, will most certainly cement any sentiment toward all things flowered and leave me saying, “if you ever have only two August days in the Portland area, I would spend them this way.”

Courtesy of the Portland Visitor’s Bureau (thanks Marcus Hibdon for your hospitality) our itinerary was near completely laid out before us and (minus some driving woes – GET THE GPS IN YOUR RENTAL CAR WHEN DRIVING IN PORTLAND!!!) virtually worry free.

Trips to the various garden gems of the “City of Roses” (Portland’s official nickname) began with a visit to the self-proclaimed “haven of tranquil beauty” that is the Portland Japanese Garden http://japanesegarden.com/. The allure of the Japanese Garden came not only in the five intricate gardens within its confines, but in the people who we found there. As delicate as the gardens themselves, Brandi and I watched, in awe, as a 90+ year old couple strolled in front of us (there to celebrate their 70+ wedding anniversary.) We were taken by the husband’s gentle care and concern for his wife as he directed her pose for a snapshot. “Look up into the sun” he encouraged, “you always look so beautiful with your face to the sun.” Such tenderness seemed oh so apropos in this protected and carefully planned garden. From the parking lot of the Japanese Garden, a short stroll down the hill finds you in the International Rose Test Garden. The Test Garden touts some 10,000+ rose plants ranging from

The classic simple red bud now has varieties named for “budding” stars (my favorite – after the Brandy Rose of bed A27 of course! – being the Dick Clark Rose . . . like that man needs any more immortalization?) While other local attractions in “the park” could have taken the remainder of a long, enjoyable day in Portland (The Arboretum, Children’s Museum and the Portland Zoo to name a few of the other locations that sit on Portland’s 400 acre Washington Park http://www.washingtonparkpdx.org). . . a man’s got to eat!

Our day then segued to a welcomed and unforgettable brunch at Salty’s on the River http://www.saltys.com/portland/. Let me start by saying Salty’s is more of an experience than a meal. If your dining-out vocabulary only knows words like “Golden Corral” or “Cracker Barrell” or even “Red Lobster” then it is high time you joined the ranks of cuisine connoisseurs that can appreciate ambiance and flavor joined with a view like none other! I can’t say enough good about Salty’s. Again, the people at Salty’s seemed to say it all. We watched birthday parties, anniversaries, business luncheons and, yes, couples (like us) finding enough space outside to spark romance.

The buffet was like none other I have had. A standard brunch buffet of breakfast foods, a seafood buffet, roast beef, ham, crepe and omelet bars (Curtis even made me his signature “Green Eggs and Ham” spinach omelet) were only equaled by the chocolate fountain and, my personal favorite, trays of locally fresh-caught wild salmon options. The Blackened Salmon with Thai Chill was my first and last bite of the meal . . . I had to go back for another bite and did so without worry of jeopardizing the lingering goodness of the orange-cranberry cookie and the caramelized nut tart. For me, the ultimate irony is that all who know me will tell you it is no novelty for this writer to gush about a dining experience; however, it has been nigh impossible for me, with a severe allergy to all shellfish, to comment on a seafood restaurant! Upon booking my reservation, I let Managing Partner, Linda Addy, know of my desire to experience Salty’s yet of my extreme shellfish allergy. She not only willingly accommodated my needs, she assured me that their Co-Owner shared my allergy and I could rest assured that my meal would be 100% delicious and 100% shellfish free. Chefs used new pans on my behalf. I tried sushi for the first time with full confidence that I could do so without fear of shellfish exposure. I ate in perfect bliss! Brandi too enjoyed every bite (though an admitted seafood dodger.) The cost of the meal might be more than the aforementioned chain restaurants, but the experience will long be worth the memory and our return is certain.

Day Two in the greater Portland area found us walking in a locally-owned garden paradise in Beaverton, Oregon (a welcomed respite just a few minutes from the bustle of Portland.) Innkeepers Harold and Margaret Meyering and their Cornerstone Bed and Breakfast hosted us for a night’s stay. With lofty pines and blackberry bushes abounding, and birds and squirrels playing/feeding on the deck outside our window during a homemade strawberry waffle breakfast, Harold and Margaret know how to welcome their guests! These God-fearing, loving hosts have endearing family pictures on the walls of their spacious home. Rooms are clean and bright and have their own bathrooms. Entrance is available from inside the home or from the deck door allowing patrons to come and go as they please. We felt a great connection to the Meyerings and hope to see them again on a return visit.

From Beaverton we returned to Portland with our sights set on the Rhododendron Garden in Crystal Springs. This self-guided tour through a wooded, lake area couldn’t have started our day off better. Geese, ducks and squirrels (all seeming plenty tame – approaching and following us at close range) were our only companions for the early morning stroll.

From the springs, we set off to experience the Portland Saturday Market. Shops and booths abound. Street vendors seem to thrive and people come out en masse to enjoy the festivities. The market is just a stone’s throw from Voodoo Donut. After an hour wait for our donuts (yes they are that good!) we strolled through the market (under the river overpass) with our tell-tale pink box of donuts and little care in the world. 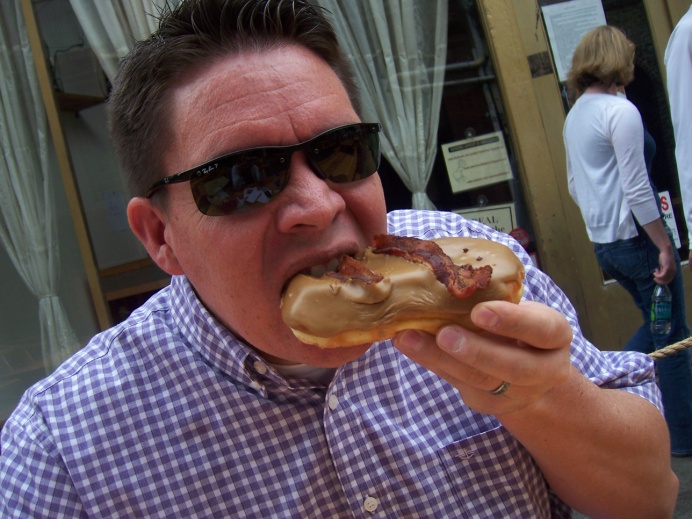 As expected, my favorite part of the market was the people we encountered. While waving in and out of booths, Martin Kruming (of San Diego California), approached me in passing. “Are those donuts really that good” he asked. I had purchased a half-dozen donuts (I know, I know . . . who needs more than one dough ball with maple flavoring and 2 hunks of bacon on the top . . . but relishing in Americana and getting caught in the moment, I had 5 more on hand.) “Try one”, I prodded. Martin reached into the box and pulled an arm off of the “Voodoo doll” donut (their classic jelly-filled chocolate bar that has been pre-cut and cooked in the shape of a doll.) His wife and daughter both cried out, “what are you doing eating that poor guy’s food?” I must confess I couldn’t have felt more solidarity or contentment had Martin Kruming been my father! He was quick to the uptake and came back to his wife and daughter with, “haven’t you met John and Jane? (pointing to me and Brandi.)” He promptly introduced us (as John and Jane) to them both. I we shook their hands and smiled. No introductions necessary. Martin’s story could have only been eclipsed by the next encounter some ten minutes later with Chris Boeck from Panama. As I returned to feed the meter, Chris’ sister (celebrating her brother’s arrival and her son Peregrine Painter’s 13th birthday) had stopped her SUV to let Chris take a picture of Voodoo Donut. “I will give you $20 for your box of donuts”, she exclaimed. “Donuts you can have . . . the box I can’t part with (conversation piece for my office.) I approached the driver’s side door of her vehicle and revealed a second bacon maple within the box. I gave it to Chris and, if possible – and my fellow foodies you will get me when I tell you it is – I found more enjoyment from watching him enjoy what I had just enjoyed a few minutes earlier than if I had eaten that donut myself. Had I become one of the eclectic eccentrics of the Portland Saturday Market? Sure seemed that way! Moral of these 2 stories . . . You’ve simply got to go to the Portland Saturday Market and make your own new finds and new friends!

Our day and time in Portland ended as we caught the Lan Su Chinese Garden downtown before hoping a plane back to Salt Lake. This beautiful garden might best be called stunningly “precise.” The intricacies of detail in this garden (actually a Chinese palace that was created in China and then taken apart and reassembled piece by piece here in Portland) are “awesome” in the true sense of that word. In one portion of the courtyard, every stone is aligned and patterned to be at precise height and color to form exquisite lotus flower designs.

Although smaller than other gardens visited on the trip, we found this stop certainly worthwhile as the completion of our trip and as a capstone for A Couple Exposes the City of Roses.