I find that breakfast, for an American who has been travelling throughout Asia for decades, is the most difficult local meal to adapt to. Lunches and dinners characterized by intense new flavors and peppering heat, bring a welcome and novel exoticism. However, these same flavors, so welcome in the afternoon and evening, can seem abruptly discomfiting when consumed soon after waking. The eating habits of many seasoned travelers abroad tend towards comforting and bland continental or American style breakfast foods in the morning and culinary adventures postponed to later in the day. So, it was with some trepidation, then, that while on a recent trip to Hyderabad, India, ‘The City of Pearls,’ I set out to experience a range of traditional Indian breakfast foods.

I initiated myself into Indian breakfast food with a dish of tapioca balls known as khichdi. Accustomed to eating tapioca balls in that sweet desert beverage, bubble tea, I find their toothsome texture, first firm, then yielding and chewy within, and quite enjoyable. The tapioca balls in khichdi are quite small, not much larger than a pearl. Their mild yellow translucent appearance though hid a surprising amount of hot curry flavor. The mouth feel of the small chewy orbs, interspersed with a few peas and chopped nuts, I found to be so delightful that the first small serving I took from the serving dish was soon followed by two more helpings.

Several forkfulls into my third serving I began to experience a rapidly building feeling of heat on my tongue and reached for my coffee cup to quench the flames. A dining tip likely unnecessary to those more accustomed than I am to eating spicy food for breakfast; hot coffee doesn’t help the situation! I turned instead to the cold citrus beverage locally known as sweet lime juice and got the welcome solace. A word about coffee as long as we are on the subject; I found that the drink was as popular, if not more so, than tea. I was surprised, as this area is surrounded by large and well-know tea plantations and produces and consumes more of it than any nation except China, including such notable teas as Ceylon and Darjeeling.

Legend has it that the coffee bean made its way to India in the 16th century. Baba Budan, a Muslim from India, was making a pilgrimage to Mecca. It was there when he happened to sample the delicious and bracing beverage, and was so taken with it, that he smuggled a handful of green coffee beans back to back to his home wrapped in his sash promptly and took up cultivation.

Over time it came to be consumed in a form now often known as South Indian coffee, which is a mixture of chicory and coffee that is strongly brewed and filtered in a pair of distinctive metal cups, one having a pierced bottom. This coffee is often mixed with hot milk, then aerated, cooled, and frothed by pouring it back and forth rapidly between the two cups in dramatic fashion, with the top cup often held several feet above the bottom. If you are an aficionado of coffee, the Hyderabad version is delicious, and its preparation can be an entertaining spectacle to see as is the city itself. Hyderabad lies at the crossroads of north and south India and has played a central role in the history of the area as a center of military might, commerce, and culture in both ancient and contemporary times. 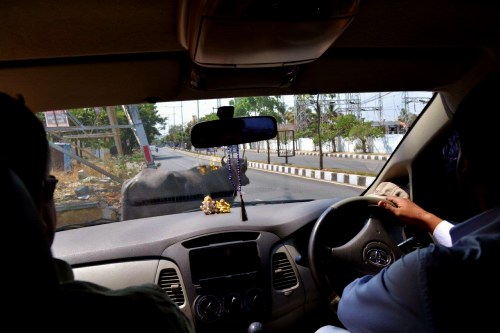 Hyderabad is home to Fort Golkonda, the site of notable battles and gem mines that produced the Hope Diamond and other legendary gemstones. In modern times the city has emerged as a major center for the Information Technology industry. Being located astride major trade and transit routes, it’s no surprise then, that the Hyderbadi food demonstrates a distinctive blend of the languages, customs, and flavors found elsewhere in this vast, diverse, and ancient land. The cuisine is renowned throughout India, and several popular and even famous local dishes, such as biryani and hylim have spread throughout the country.

Encouraged by my successful initial culinary foray, I went back for a second round on day two and expanded my selection of foods to add idli, daliya upma, and medu vada. Idli are a fluffy steamed white cake made from a flour of ground rice and white lentils. As with many South Indian types of bread, the grains are fermented prior to being ground into a paste and the fermentation process gives a delicious tang to the cakes that, to my American palate, was reminiscent of sourdough pancakes.

These cakes are usually accompanied by chutney or some kind of gravy, and while I enjoyed the idli eaten plain, the ginger chutney I selected to flavor them with had such an intense flavor I had difficulty finishing it. Daliya upma is a thick savory porridge made from cracked wheat, peas and onions and flavored with herbs such as curry leaf, mustard, cumin and coriander. It was hearty, satisfying, comfort food and I surprised at how much I enjoyed the strong flavors.
Finishing off my food survey was a pleasing but bland (especially following that ginger chutney!) donut shaped lentil dumpling, medu vada. The dumpling was comprised of whole lentils and lentil flour and deep fried so perfectly that the oil it had been fried in was practically undetectable. The brown crust had a texture similar to cornmeal and offered a hint of resistance prior to yielding up the soft, warm dough beneath it. It calmed the intense flavors that had preceded it, and to my still developing appetite for strong, intensely flavored Indian breakfast foods, was the perfect ending to an enjoyable and educational meal.