You could be forgiven for passing the SANZAC Secondary College in Kota Kinabulu without either a second look or thought as you do so. But on closer inspection this College in the Capital of Sabah, Malaysia, is a poignant reminder not only of the years of suffering World War 2 brought, but also a celebration of the friendship those times generated. It is a lasting and practical symbol of the strong bond of comradeship between the residents of Sabah and the Australian soldiers from the 32nd Battalion who were stationed at the site just after World War 2.

A local teenager Francis Loh, ran errands for the Australian soldiers based at the site in the then Jesselton between 1945 and 1947. His dedication and hard work so impressed the soldiers that they paid him back by raising the money he needed to complete his schooling and become a journalist. Francis later went on to pursue a very successful career in the Insurance industry.

In 1966 a year before the city of Jesselton was renamed Kota Kinabalu, Francis decided to make a permanent monument to thank the Australian Soldiers for their generosity, and so became the founder of the SANZAC School on the donated land from the Education Department.. A joint fundraising effort commenced and raised RM250,000 required for the project. Half the funds were donated by the Australian and New Zealand Returned Service League. The other half was raised by Francis himself, with such innovative schemes as local dragon dances and other activities within the local Kota Kinabalu community.

Over the next 5 years Francis oversaw the construction of the project as his vision became a reality. The seven classrooms along with the thirty foot memorial, were finally handed to the Education Department in 1971. The four pillared memorial showed the national flags of the 3 SANZAC countries, Sabah, Australian and New Zealand, and can still be seen in the present day. 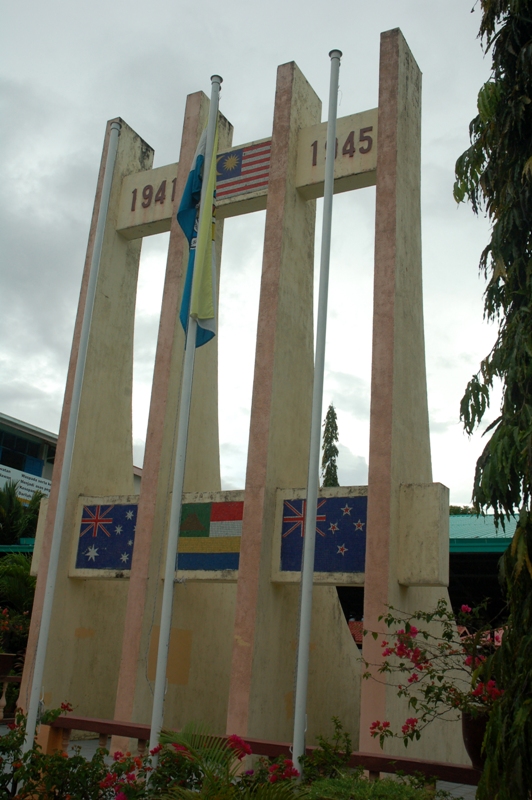 Today the school has five blocks of classrooms as well as a hostel. It continues to contribute to the educational development of Sabah students as well as acting as a poignant reminder and monument to the soldiers who lost their lives for the liberation of Malaysia during World War 2.

Over the years it has become a place of pilgrimage especially for members of the Borneo POW Relatives Association of Western Australia. Their 2003 visit was greeted with a wonderful welcome from Teachers, Students and Parents alike, official welcome and many speeches, despite their visit being on a Sunday. My own visit in January 2011 was decidedly low key in comparison but left me with a lasting impression of the historical significant of such a memorial

SMK SANZAC Memorial is a legacy to the strong bond between the Australian soldiers of 32nd Battalion and Francis Loh. Australian visitors to Malaysia should include a tour of this historical memorial at Peti Surat 264, 89458 Tanjung Aru, Kota Kinabalu, ensuring that the true spirit of the SANZAC’s foundation is never lost.