In today’s world of innovation, we hear of buildings being made out of hay bales, foam, pumice and more, but we’ll bet you never heard of a building made out of corn cobs – and not just a building but a palace! Well, okay, the building itself isn’t really made of corn cobs, but since way back in 1892 as many as 275,000 ears of corn are used each and every year, beginning in September, to decorate two sides of the World’s Only Corn Palace. Old murals of corn, sorghum and milo are replaced annually, giving way to creative new murals of original design – and all to celebrate the harvest. 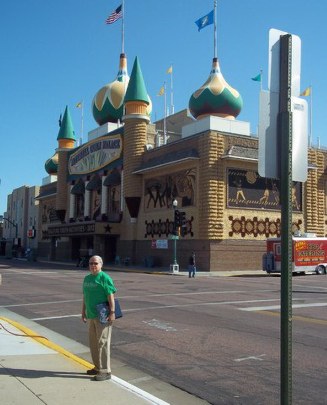 If the entire building had been made of corn cobs and stalks, old Mr. S.D. Winterwind might have easily huffed, and puffed and long ago blown the palace right off the Main Street of Mitchell – South Dakota, population 15,000. That’s where the Corn Palace, a major folk art icon, is located. When you go there to see this creative landmark for yourself, you’ll find it located just off Interstate 90, an hour west of Sioux Falls, the easternmost city in the state.

Borrowing from some promotional literature on the building, this is truly an “a-maizing” and fun creation, except, of course, in years of drought, but even then, new murals replace old ones as farmers look to better times. The annual theme for the murals is done by a committee of eight, and a local artist from the university provides the drawings, which are then created out of ears of corn in various colors, as well as rye and sour dock (a weed) on huge panels of tar paper.

Each time we travel through as travel writers and see the Corn Palace, we are ever more impressed with this annual labor of love in honor of the “Corn God.” So are about a half million visitors annually. People come from everywhere to this wind-swept prairieland city. In one weekend, the visitor log showed visitors from all 50 states and 35 foreign countries, the Palace being especially popular with Japanese.

August, by the way, marks the culmination of the annual summer doings with the Corn Palace Festival. All of Main Street is cordoned off, and as many as 70 vendors participate with big-name entertainment, agricultural exhibits, carnival rides for the kids and more. In addition, there are 300 event days per year at the Corn Palace, Mitchell being the focal point of the area for a 60 mile radius. The Palace is the site of many sports events as well as stage shows, trade shows and other activities.
Most visitors, of course, find the Corn Palace pretty “corny,” and so it most certainly is in a fun way! With its fairytale-like onion-shaped domes and Moorish, mosque-like appearance, it’s an unparalleled Midwest icon that the whole family will enjoy visiting and long remember.

If you go: The World’s only Corn Palace is open to the public Memorial Day through Labor Day — 8 a.m. to 9 p.m. Other hours in the spring and fall are April and May, September and October daily from 8 a.m. to 5 p.m. Meanwhile, the palace is open the months of November through March — Monday thru Saturday 8 a.m. to 5 p.m. Admission has been free since 1892, and tours also free.

Also, well worth seeing in Mitchell are the Dakota Discovery Museum, the George McGovern Legacy Museum, the Carnegie Resource Center, and a live archeological dig in progress at Mitchell’s Prehistoric Indian Village. Mitchell, by the way, is a thriving community with unemployment as low as three percent. Most of the jobs are in the manufacturing field, along with construction.